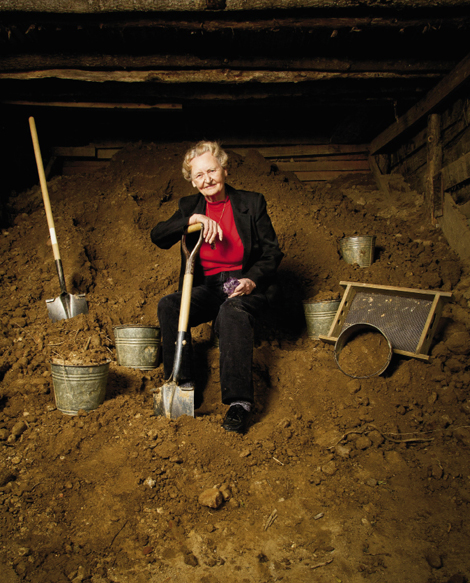 Growing up in the 1950s, della samuel, along  with her family, vacationed each year in Macon County. There, she spent her time digging in the dirt, loving every minute “in the hole,” as she recalls her early days as a rock hound.

It was a time when a gem-mining hobbyist “could dig all day long for a dollar,” she says. And her passion for the hunt never waned.

Each May, the remarkably active, 90-year-old retired nurse, who winters in Kissimmee, Florida, makes the pilgrimage to the Gem & Mineral Museum in Franklin, where she has served as a volunteer and tour guide since 1980. Housed in the circa-1850s, former county jail are glittering displays of international gems and minerals.

It’s here that Samuel feels most at home, engaging visitors with her knowledge of precious stones, fossils, and minerals, ranging from sea green emeralds in the North Carolina Room to an enormous aquamarine from Pakistan in the World Room. There’s even a dinosaur egg on display in the Fossil Room, a starburst selenite crystal from Australia, and a two-and-a-quarter pound locally mined ruby. “I love the jaspers and amethysts,” Samuel raves. “They have so many different patterns, it’s like looking at a painting.”

But her most treasured stone is a 15-carat ruby she found at Shuler’s mine in the mid 1950s. Samuel had it made into a ring as a gift for her late husband, and she’s worn it since his death in 1989.

Along with Samuel’s work at the museum, she teaches faceting (a cutting technique) at the annual Macon County Gemboree, held July 24. And although she no longer digs, gems and gem mining remain her passions. “It’s like going on a treasure hunt,” she says. “Every rock holds a new picture.”