The Trailblazer: Remembering Art Loeb, the man whose love for hiking helped create a beloved footpath 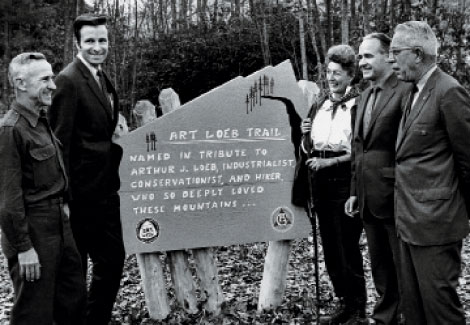 On a November day 40 years ago, a dedication ceremony attended by 300 on the banks of the Davidson River near Brevard officially opened the Art Loeb Trail. The 30-mile footpath is bisected by the Blue Ridge Parkway and crosses some of the highest peaks in Pisgah National Forest, including Black Balsam Knob, and Tennent and Pilot mountains. Serious backpackers and casual hikers have explored portions of this revered trail, but few may realize how this popular track came to be or the story of the Philadelphia native from whom the trail gets its name.

In 1936, at 26, Art Loeb graduated from Yale and moved to Brevard to work at Ecusta paper mill. The demands of his job as general manager, coupled with raising a family, left little time to pursue other interests. But a heart attack in his mid-40s forced him to find a healthy hobby. Following doctors orders, Loeb walked—initially on the track at Brevard College and eventually in the woods.

Typically clad in a wool Pendleton shirt, hiking boots, and carrying a worn leather day-pack and hiking stick made of Carolina silverbell, Loeb spent nearly every weekend exploring new trails. “Dad had a quiet demeanor, but he loved people. Mostly he loved sharing his passion for the mountains,” remembers Joan Dickson, one of his three daughters.

While his regular jaunts restored his health, “He enjoyed the challenge of finding trails,” says Joan. “He was always looking for links.” Among his favorite projects was joining scattered sections of trail with the help of hiking partner Keith Argow. At this time, the U.S. Forest Service managed few trails, so there were no blazes, and trail junctions were ambiguous.

During his hikes, Loeb found enough junctures to connect Davidson River Campground in Brevard with Daniel Boone Boy Scout Camp in Haywood County. Sadly, he didn’t live to see the trail system develop as a public resource. In 1968, at age 54, he was diagnosed with a brain tumor and died later that year. Picking up where he left off, the Carolina Mountain Club and U.S. Forest Service blazed the path the following summer and named it after him.

On the day of the dedication, two-dozen friends, family, and hiking partners walked in Loeb’s honor from the John Rock Fish Station (now the state fish hatchery) to the ceremony held at the trailhead. “It was not somber. It was the opposite,” says son-in-law John Dickson. “Everyone was so pleased the trail was happening.”

And four decades later, hikers are still walking in his footsteps.