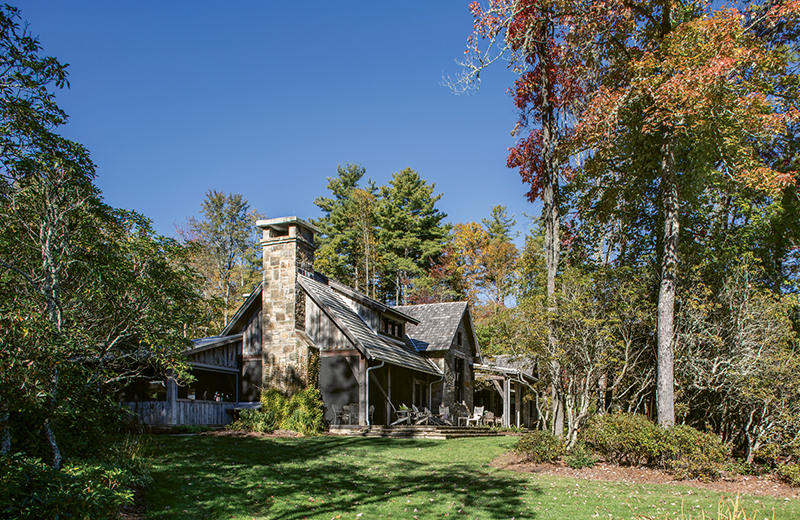 The back of the Lake Toxaway home facing the lake is a tranquil hideaway.

Imagine a charming rustic cottage on a mountain lake, built by settlers in the early years of the last century. The beams were hand-hewn, and the stones in the chimney pulled from nearby fields and expertly assembled by self-taught craftsmen. As the years went on and the family expanded, so did the cottage. Wings were added to each side and another cabin was constructed for another generation, connected by a breezeway. That’s the aesthetic behind the unpretentious, welcoming house on Lake Toxaway that Al and Parker Platt of Brevard’s Platt Architecture designed for a Greenville, South Carolina, couple (who prefer to remain anonymous for this story). Constructed over the course of 18 months by Bronco Construction and completed in 2013, the home may not have the long history it appears to have, but it’s destined to host happy family gatherings for decades to come.

The homeowners bought their first home on Lake Toxaway in 1999. While they loved the house—a spacious three-story dwelling on a hill overlooking the lake—there were drawbacks. The steep steps down to the water started to seem impractical, especially when they imagined the grandchildren who would visit one day (not to mention their own aging knees). And without being too exposed to lake traffic, “they wanted to relate to the lake more directly,” says Parker. 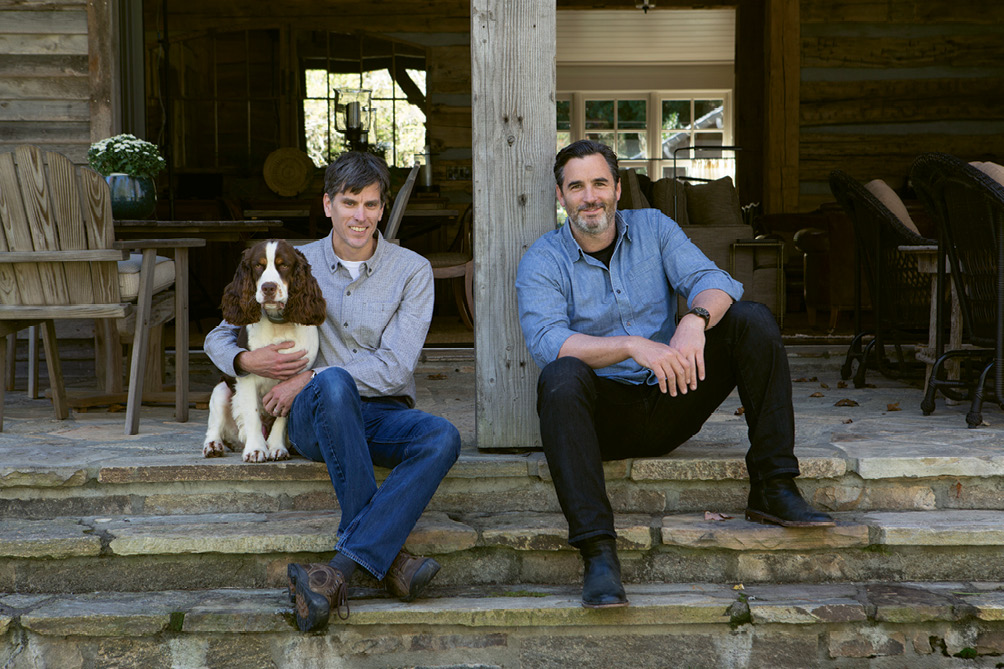 So when a flat, level property nestled into a cove became available, they jumped at the chance to purchase it. There was an existing home on the property, but they decided to start over and worked with the Platts to build their dream lake house.

“When I first went in to talk to the Platts,” says the homeowner, “I said I wanted the house to hug you, and I don’t want it to look pat.” Beyond that, the options were open. The couple was happy with the floor plan of their first lake home but wanted it to be one level instead of three. 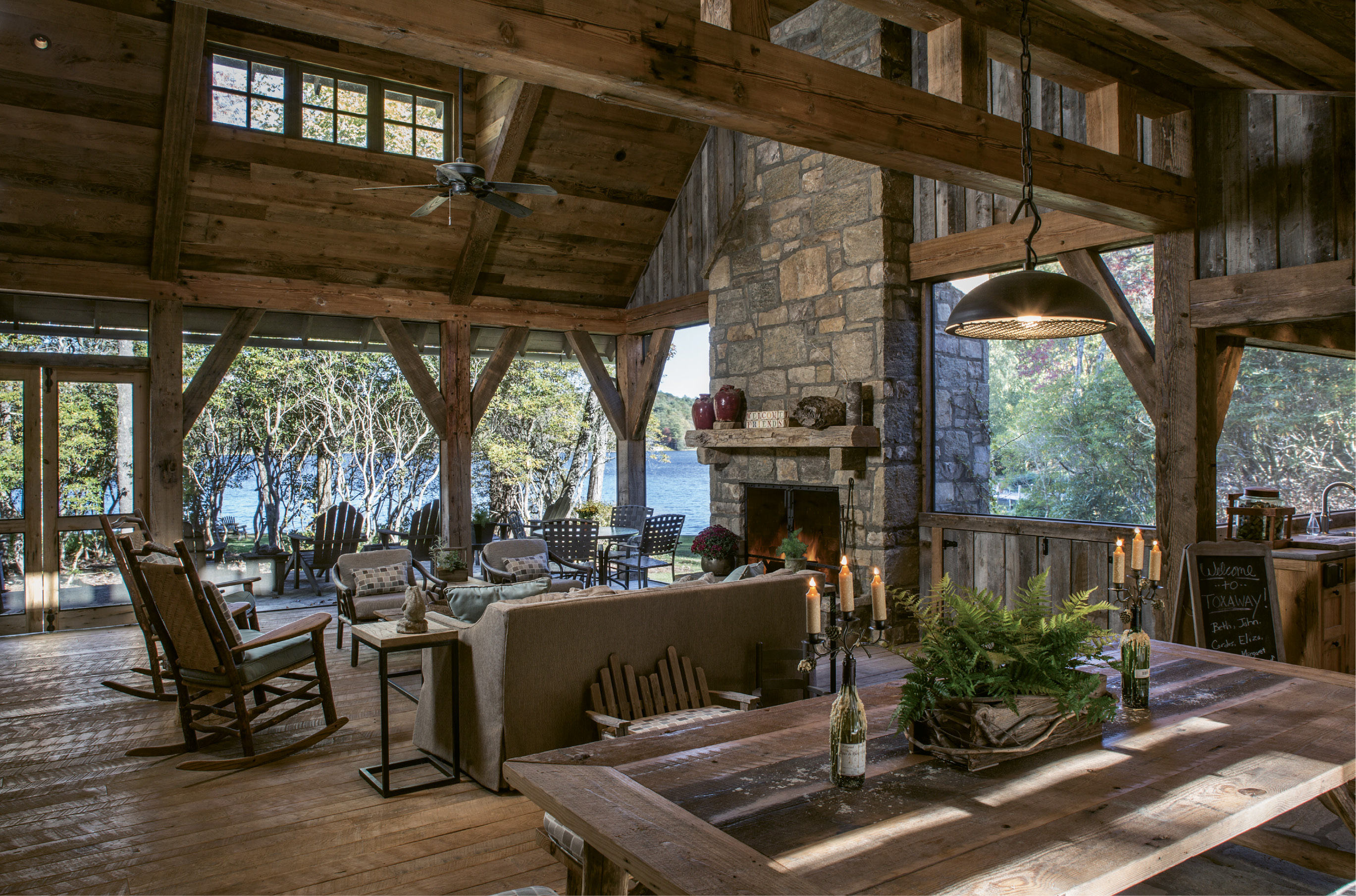 The screened porch incorporates a living area with a fireplace, as well as a concealed TV, an outdoor kitchen and grill, and a dining table.

The Platts achieved the added-to-over-time look of the house in a variety of ways. “It’s essentially an elaborate dog trot,” says Parker. The gabled roof and stone construction around the central chimney suggest an original section of the house. The weathered pine shake on the roof harmonizes with siding from a surprising source: it’s repurposed “snow fencing” from Wyoming, once used to prevent snow drifts. The wooden-slat fencing spanned the wide-open landscapes of the West for generations before it was replaced by a cheaper plastic substitute. And it holds a lot of history—the homeowners even found a heart carved into one of the boards on the home’s exterior.

The stone finish of the house’s central section carries through to the interior, where it “looks like it used to be outside,” says the homeowner. It contrasts with the interior finishes that include thick beam siding and white beadboard—a lake house classic.

For a family that loves to cook, the kitchen naturally serves as the central gathering place. Its long, narrow layout “fully accommodates what happens in the house,” says Parker. From the “business end” of the kitchen, with its window overlooking the water, to the social island in the middle to the sitting area at the opposite end, “a lot of different things can happen in one space.”

But, he continues, “the coolest thing about the house is the screened-in porch.” Calling it a porch is almost an understatement; the space encompasses an outdoor living room, kitchen area with a grill, dining table, and a fireplace. Multiple family members can be engaged in different activities in the space, interacting or not, enjoying the lake view and the breeze. There’s even a TV concealed in a cabinet, so those fall game days can be enjoyed outdoors. The porch joins the main house and the guest house, which the homeowners call “the cabin.” It’s the only two-story section of the property, with its own kitchen, laundry room, and a cozy playroom.

It’s an ideal setup. Guests in the cabin can “ease into the day without imposing on anyone” in the main part of the house, says Parker. Having lived in the dwelling for several years now, the homeowner says the layout has worked out exactly as hoped: “If you need to get away from it all, there’s always a place.”

While the house hugs the visitors on the inside, it also hugs the shore of the lake, with a short expanse of lawn and native plantings leading to the water. A dense rhododendron thicket once separated the property from the lake. It was thinned, but some of it was preserved, lending a gentle, natural feel to the landscaping. Those hoped-for grandchildren now visit the lake house, and there’s a play set for them near the shore. 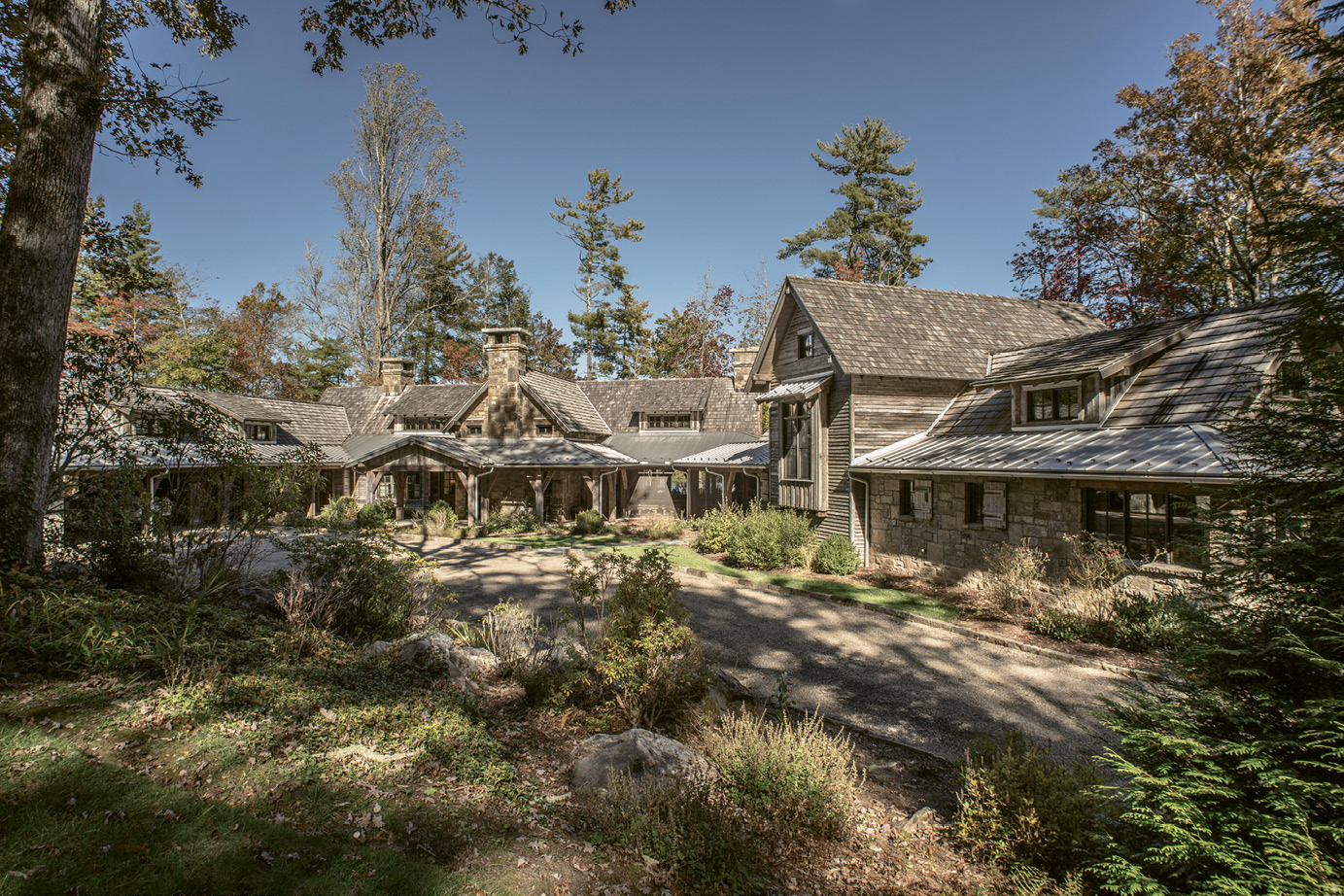 Master Plan - The home’s floor plan includes a garage to the left, the main house, screened porch, and breezeway in the center, and the guest cottage—the only area with a second story—to the right.

The couple spends a lot of time at their home on Lake Toxaway, where it’s only an hour and a half from home but 10 degrees cooler. “Every weekend we don’t have a conflict, we’re here,” says the homeowner. The family hosts Thanksgiving at the lake, bringing together their children and their families along with aunts, uncles, and cousins. They can all fit around the custom dining table. With folks coming from New York, Texas, California, and elsewhere, it’s truly a gathering place where the family creates lasting bonds and memories.

“The homeowners really did a wonderful thing for their family in building this house,” says Al. It’s easy to believe that the scenario that inspired the design—generations of a family living in and enjoying the home—will come to pass here.