Home /Time is a River

Time is a River

Time is a River: The Land Trust for the Little Tennessee marks progress by the years 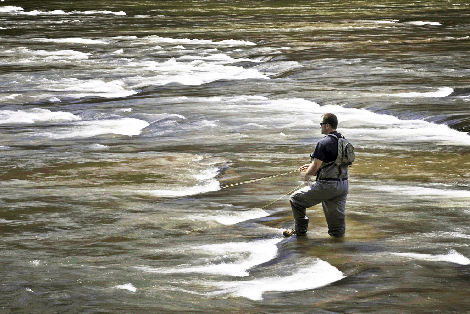 The Little Tennessee River runs dark and cold from the shade of the Georgia mountains, flowing due north into Western North Carolina. But after passing Franklin, it shifts gradually west to join the Tennessee River, the Ohio and Mississippi rivers, and finally spills into the Gulf of Mexico.

This disorienting route–where downstream runs up the map–contributes just one of the pointillistic details that forms a cohesive portrait of the upper Little Tennessee River basin, which also drains the Tuckasegee and Nantahala rivers. Colorful dabs of natural history and overlapping strokes of human history, thousands of years of it, coalesce into an atmosphere of stillness and sameness. It generates a false sense that nothing much has happened here, and that nothing much is ever going to happen.

But this stretch of land has an amazing, but almost invisible, backstory. It’s been inhabited since the end of the Stone Age, and later became home to the Cherokee, and remained as such for many centuries until settlers began to push them out in the 1700s.

“This place was the geopolitical center of the South in the 20 years before the American Revolution,” explains Paul Carlson, executive director of the Land Trust for the Little Tennessee (LTLT). “It’s a nationally significant world culture heritage zone embedded in a world-class natural history zone.”

Listen to Carlson tell the story, and those layers of the past meld into a compelling narrative that’s as quietly forceful as the river itself—one that he’s devoted his life to preserving.

In the last 15 years, LTLT has grown from an idea dreamt up over lunchtime conversation to a six-person staff in Franklin. The organization has taken on land conservation efforts in the nearby Hiwassee and Cheoah river valleys as well. It has working relationships with seven counties, two states, the federal government, the Eastern Band of Cherokee Indians, numerous other nonprofit community organizations, and individual landowners.

LTLT has preserved much of the look of the mountain valleys along the Little Tennessee River. In doing so, the group has also begun protecting or recreating centuries-old ways of life in these pastoral byways, rescuing communities of delicate antique buildings and restoring ancestral lands to Cherokee ownership or care.

Measured in numbers, the LTLT’s 30 projects so far have conserved some 12,000 acres along 35 miles of river frontage and have buffered more than 50 miles of national or state forest boundaries. In the process, it has created a time capsule of sorts that seals in today’s sensory delights—wild forest, bucolic farmland, swift clean water—for centuries to come.

“We’ve had a huge impact on conserving the main stem [Little Tennessee] river,” Carlson says. “The tributaries and broader farmland preservation work may be the story of the second decade of LTLT.”

What’s In the Past
The turmoil of the past is largely hidden along the Little Tennessee River, but the area’s history is still there. For an estimated 14,000 years, humans inhabited the region; mound builders of the Mississippi left their mark long before the Cherokee.

Remnants of Cherokee structures in the area date back 1,400 years, an opportunity and challenge for conservators. One walled Cherokee village of great size still had occupants in the late 1700s. Even today, clues to a robust early civilization appear in ghostly forms: grinding stones and petroglyphs, faint wooded trails, V-shaped rock fish traps in the Little Tennessee River.

The basin formed one of the main pathways for bustling cross-country foot traffic that preceded the Europeans’ arrival. And it later served as an important transport route for colonial exports being taken to the harbor at Charleston, South Carolina, or what was then Charles Towne. As settlers moved in and encroached on the Cherokee, fighting for control of the Little Tennessee basin brought violence, destruction, and the permanent constriction of traditional native lands.

As the French and Indian War played out and the American Revolution loomed, complicated alliances between Indian groups and European powers produced bitter results along the Little Tennessee, particularly at a river bend called Cowee, several miles north of Franklin, which was then a substantial Cherokee community with diplomatic importance.

In 1776, the nascent revolutionary forces gathered in their greatest strength yet at Cowee, helping the patriot cause but at great cost to the Cherokee. In the end, the tribe paid dearly for its misalliance with the British. Their towns were burned, and their farmland was appropriated for new settlers. The first order of business for newcomers was to make room for full-scale agricultural development, including orchards and livestock, by clearing the valley floors of lush canebrakes—a major materials resource for Cherokee tool and basket makers.

But the effects of change shifted from social to environmental with the onslaught of industrialism in the 1880s. The seemingly endless virgin forest fell to the ax; woodlands farther north were already exhausted and railroads finally had punched through the massif. Western North Carolina was heavily logged during the early 1900s, leaving the land degraded and prone to fire, flood, and catastrophic erosion.

The trees grew back in the subsequent decades, just in time for a new wave of settlers—retirees and second-home owners who began arriving in the 1960s. Over the next 40 years, the population of three counties with Little Tennessee River basin drainage—Jackson, Macon, and Swain—grew 77 percent. By 2000, the wild landscape, and the signs of the past that it holds, were once again under stress—this time from development.

Reconstructing history
LTLT’s work may have begun as an effort to conserve scenic vistas and protect water and forest, but with its holistic approach the organization has also wrapped its arms around a number of old buildings and ceremonial sites—some of them centers of early farm life and even earlier Cherokee settlement. One such collection is the Cowee-West’s Mill National Historic District, which contains almost two dozen archaeological gems and architectural sites in varying states of structural stability, among them a creekside hamlet, an old general store, several farmsteads, a simple country church, and a ceremonial earthen mound. All are protected now, thanks to the LTLT initiative, but it may be years before they are all brought back to life.

But a nearly complete restoration project, just across N.C. 28 from the Cowee Mound, shows just how neatly a single revitalization project can be conducted. In 2006, during a complicated land deal, the trust found itself the owner of a rudimentary farmhouse, built sometime between 1860 and 1880. The plank style had only vertical boards running directly from a floor sill to the roof; few examples still exist because the construction method was so unsound.

LTLT management didn’t want to keep the house, but found a partner in Preservation North Carolina, an organization that helped help find a buyer to rehab the structure in a historically appropriate way. The new owners are Asheville architect Diana Bellgowan and her husband, Charlie Wallin.

“It really shouldn’t be standing. It was about as structural as cardboard,” says Bellgowan, who has been supervising the farmhouse restoration. “It had severe termite damage and underneath was a groundhog mansion. When the contractor got in there he freaked. He thought it might fall down.”

The reconstructive work began in 2008, and the house now meets Energy Star standards and may become the first rehabilitation project in the area to qualify as a N.C. Healthy Built Home. From the outside, the Queen Branch Cottage looks new while retaining the same old style visitors would have found a century ago. The small, simple rooms are devoid of closets—a reminder of how few belongings people had in the mid-1800s. The ceilings are low. The kitchen is straightforward, not decked out with marble and fancy appliances; its window overlooks a prosaic backdrop that was preserved through good intentions and land trust activism.

As fast as the land trust gets ownership, oversight, or other legal control of property, the organization puts some of it back under Cherokee stewardship.

In the case of the Cowee Mound, the Cherokee’s main diplomatic and cultural center had been lost to them for 185 years. LTLT was able to purchase the mound from a private landowner, and then sell it back to the Eastern Band in 2007.

There are other substantial initiatives with the Cherokee Preservation Foundation, a lead player for financial and other support. At a newly acquired
900-acre tract called Yellow Creek, students from Western Carolina University are studying a wealth of tool-making artifacts that date back thousands of years. The foundation also endorses outreach efforts to help private landowners identify any Native American sites on their property for future conservation.

And the Cherokee Preservation Foundation, LTLT, and Qualla Arts and Crafts Mutual are working together to bring back stands of river cane and groves of butternut and white oak. The revitalization has been crucial in restoring important local materials to Cherokee craftspeople. LTLT has worked with the foundation’s Revitalization of Traditional Cherokee Artisan Resources initiative since 2002 to map and expand canebrakes on LTLT properties, the Cowee Mound, and other properties around the region.

Momentum is building all along the western river drainages for more of the same: projects that integrate thousands of years of natural and human history. “There are many opportunities in Western North Carolina to hold together rural landscapes,” says Carlson, “This is one of the great ones.”