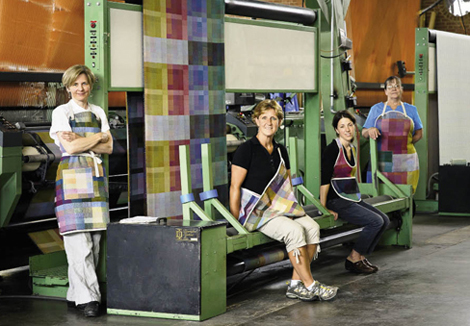 Warp and weft are the core words of a weaver’s language, forming the cadence of their work. The warp yarn runs vertical, top to bottom, on cloth.

The weft is horizontally intertwined, rising over and under the warp. At the loom, the warp is lifted up and down, up and down, as the weft moves side to side, weaving a pattern. The design can be simple, fashioned for everyday products like dishcloths, or it can be intricate, inspiring more luxurious articles such as brocade coverlets and soft throws. With each piece, the weaver’s
design is dependent on a warper’s precision.

With the touch of her fingers, Phyllis Bonham can tell if the multicolored threads feeding through her warping machine are at exactly the right tension, a warper’s primary job. Bonham does this with the skill of a master. Before the weaving begins, the warp must be created by winding as many as 12,000 strands of yarn onto a giant spool­—or warp, in industry terms. This size warp can take Bonham two days to make, so her eyes are ever on the look-out for breakages in the yarn, which require skilled hands to tie.

A textile veteran of 40 plus years, she’s one of five employees at The Oriole Mill, a small-scale textile venture in Hendersonville that was started in 2006 by Bethanne Knudson and Stephan Michelson. When most mills were selling off machines and shutting their doors, the duo proceeded with a plan to “reimagine,” as Michelson puts it, the industry model. The vision included empowering skilled workers, taking pride in quality products, and erasing the line between the art of textiles and the industry of textiles.

In 1996, there were 2,153 textile and apparel plants in North Carolina, according to research by Duke University. By 2006, there were just 1,282, leaving 150,000 people without jobs. Western North Carolina was not excluded from this mass upheaval. Just one example is Beacon Manufacturing. The plant moved to Swannanoa in 1925, establishing itself as a part of the town’s history. Jobs were provided (2,200 at its peak), a mill village sprung up, and other industries followed the plant into the valley. The community named its high school in honor of Beacon’s owner, Charles D. Owen. Then, in the early ’80s, Beacon changed hands and was purchased by National Distillery, and then again by Pillowtex in the early ’90s, which began sending more production jobs overseas. By early 2000, Beacon employed fewer than 200 people. The business filed for bankruptcy in 2002, and closed the following year, ending a way of life for many in the community.

The staggering trend makes Knudson and Michelson’s decision to purchase and transform a 72,000-square-foot former distribution factory into a textile mill seem counterintuitive, or some might say, downright crazy. Michelson, who holds a doctorate in economics from Stanford University, and is owner of Longbranch Research Associates, a company that provides statistical analysis in litigation, joined Knudson in the venture as owner and financier. Knudson, a graduate of the University of Kansas with a Master of Fine Arts in textiles, had 15 years of experience in the industry, and serves as the director of design for the mill. Her comment on why they forged ahead when others closed is simple: “By the time we got the building in 2006, everything but our minds had changed.”

Today, the mill is home to five operating Jacquard looms, two dobby machines, and five automated hand looms, all used to produce high-quality, sustainable fabrics from Egyptian pima cotton, bamboo, linen, mohair, silk, and wool. The pair hopes to expand, but not beyond 20 machines, which in dollars and cents is understandable. A new Jacquard head, the programmable component of the weaver’s machine, costs between $50,000 and $100,000, a new warping machine is between $300,000 and $500,000, and all the equipment needs daily calibrations and maintenance. But the couple isn’t holding back because of the cost of machinery, but rather a concept that goes against manufacturing history. Traditionally, unrestrained growth was the model, with jobs, economic stability, and profits at the forefront of this thinking. So, if not bigger, then what? “Better,” Michelson says. “We would love to grow, but not if it hurts the quality of our work or the quality of our lives. Life is about more than just money. Money is important, but it isn’t the driving force here; quality lives and quality products are.”

Knudson and Michelson have strong opinions about how production was traditionally handled in textile mills, citing a shift in the early ’80s, when quantity took precedence over quality. Managers with MBAs, but no industry experience, began to consider workers simply part of the bottom line. At Oriole, they feel they have an opportunity to change that, giving workers flexible hours, paid holidays, cross-training, and most importantly, a voice.

“We created the work environment we wanted to work in, and we treat our employees the way we want to be treated,” says Knudson. “I think skilled hands store as much information as an educated mind,” she continues. “The workers here are professionals. They deserve my respect.”
After four years with Oriole, Bonham confirms that Knudson and Michelson aren’t just spouting rhetoric. “My whole life I’ve been called a mill rat or linen head. Now, I’m called a professional.”

Barry Conner is the overhauler at the mill, and a native of Rutherfordton, a town where textiles were taught as electives in the high schools and teens were encouraged to drop out at 16 to work in the mills. Conner did just that. Though he later earned a high school diploma, he worked his way up through the ranks to become an overhauler, the same job his grandfather held. Conner is proud of his job and proud to follow in his grandfather’s footsteps. Knudson refers to him as the “fixer extraordinaire.”

His job, she explains, is to keep the machines humming. He can diagnose a problem, take apart any of the complex looms, and put them back together again. Conner describes it as the “ability to see the machine, every component of it, in my mind’s eye, and understand how it fits together and how it runs.” With such expensive machines, having the right overhauler is essential.

Dr. Nancy Cassill, professor and department head of textiles and apparel at North Carolina State University’s College of Textiles in Raleigh, remarks that what Knudson and Michelson are doing—finding a niche market to serve—is a trend among small textile manufacturing mills in the state. For Oriole, that market is supplying independent retailers with heirloom-quality products, working directly with interior designers, and selling wares via the company’s website. The mill focuses on shorter runs of fine fabrics, and produces artisanal products like natural fiber coverlets, shams, and throws using Knudson’s designs. This style of business is more intensive than just running yards and yards of the same pattern; it keeps the focus on quality goods.

The idea is working. Combining quality, beauty, and practicality, the mill produces articles such as a matelassé coverlet, a machine-washable product that has New Zealand wool woven between two Egyptian cotton layers, creating a felted batting, and giving the coverlet a quilted look. The combination of yarn, weave structure, and finishing processes produces this look, while the wool gives it more insulation. So what looks like intricate sewing is actually weaving.

Cassill also confirms that Oriole Mill isn’t the only changing face in textiles. More companies are focusing on pre- and post-production—research and development, design, marketing, and branding—now that production jobs are primarily overseas. Nancy Lester, data analyst for the North Carolina Department of Commerce reports there are currently 1,105 textile and apparel companies in the state employing 47,600 workers.

The enrollment at N.C. State’s textile school is growing, too, and Cassill says, “The students aren’t all from China,” a common assumption of parents of prospective attendees. In fact, 90 percent of enrollment is students from the United States.

While enrollment rises at N.C. State’s School of Textiles, the Jacquard Center, a teaching facility in Hendersonville founded by Knudson and Michelson in 2000, is linking art and industry through education. Before coming to Hendersonville, Knudson worked in technical support for the computer software, JacqCAD MASTER, which designers use to program Jacquard looms. She traveled extensively to train designers in the industry. Now students come to the center from all over the globe. Some are artists who exhibit their work worldwide, while others are industry folk who return to their manufacturing jobs inspired to make new products. The center, just three miles from the mill, is the only one outside of a university setting that combines training in design with experience on the looms.

Using the mill’s machines is a rare opportunity, considering that in the past, mills were leery of shutting down production to allow training on costly equipment. “But it is at the loom that the students learns if their designs work or not,” Knudson says.

Time on the Jacquard looms is particularly valued. The machines have the distinction of lifting one thread of the warp at a time, allowing for intricate, complex, and raised designs, such as brocade, damask, and matelassé. What would take a hand weaver two hours to create, the Jacquard machine can do in a matter of minutes.

The learning environment has earned the mill a reputation in the art world. One of the people who took notice was Libby O’Bryan, who was studying at the School of the Art Institute of Chicago when she heard about Oriole Mill.

Today, O’Bryan is the owner of Western Carolina Sewing Company, a cut-and-sew production business located inside the mill. She says the blend of art and production, “makes every weaver want to come here.” Her business is another example of Michelson and Knudson’s desire to share information while growing and redefining the textile industry. They provide workspace for her, and she produces a finished product, finding inspiration in the fabrics to create pillows, scarves, throws, and other items. She also teams up with Knudson to design market bags, beach totes, laptop sleeves, pet products, and kitchen items, including a reversible apron that Knudson is particularly excited about.

O’Bryan is also part of the company’s way of closing the production loop. As more and more ancillary textile businesses shut down, there’s a need for this operation to be more independent. In 2008, three dye houses the mill depended on closed. Now, the mill aims to do the dying, since there is a dye house in the basement of the factory. “All we need now is a chemist,” Michelson jokes.

He describes the mill and the center as the “perfect symbiotic relationship.” Neither Knudson nor Michelson could envision one without the other, but then these are two people who have a rare understanding that any endeavor is truly a collaborative effort, working together, just as the warp and weft do, to execute an idea. “We are passionate and intentional about what we do,” says Knudson. “We want to produce quality products, and to do that we have to keep a clear vision of our mission while remaining flexible. This requires communication, dedication, and a strong work ethic. I believe we have all that here.”