Home /Taking it to the Bank

Taking it to the Bank

Taking it to the Bank: A husband and wife team are planting the seeds of a movement to feed the hungry 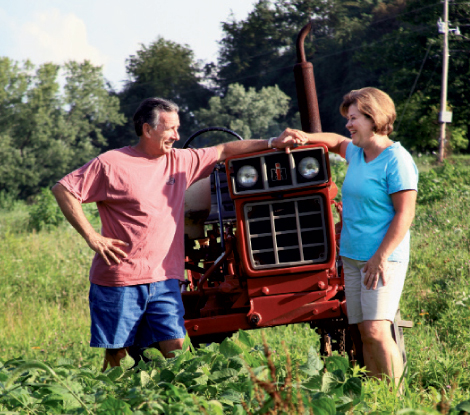 The vegetables that wind up on the plates of the hungry in Western North Carolina have varied origins—from farms planted for the cause, to commercial growers gleaning their fields post-harvest, to backyard gardeners sharing their bounty. Some come from large packers and food chains as well. MANNA (Mountain Area Nutritional Needs Association) FoodBank is the largest conduit from field to plate. Based in Asheville, it serves 315 food-dispensing organizations in 16 western counties, including soup kitchens, food pantries, and shelters. In 2009, it distributed 7.6 million pounds of food. It receives produce year-round from large vegetable packers Custom Pak Inc. and Flavor 1st, which both have Hendersonville operations, and from retail partners like Asheville-based Ingles grocery chain and Walmart. It also receives canned and packaged food from a variety of sources. During the summer, MANNA’s fresh offerings multiply, as do its sources. Fields of Hope donates about 70,000 pounds of beans, corn, potatoes, and cabbage yearly, and distributes another 21,000 pounds to a dozen other agencies and families. Farming on land loaned by The Chapel Door in Fairview, The Lord’s Acre donated 3,000 pounds of food last year, mostly to Food for Fairview’s bank. Organizers doubled the size of the organic garden to a half-acre this year. In Burnsville, organic gardeners Ted and Evelyn Baker grew nearly 1,500 pounds of butternut squash for MANNA, then “had some people over and had a harvest party,” says Ted Baker. They’re doing the same thing again this year. And in one of the largest efforts, 26 farmers in 23 Western North Carolina counties invite Society of St. Andrew volunteer gleaners into their fields to pick what’s left after the commercial harvest. Skipper Russell, owner of Seasonal Produce Farms in Waynesville, says “It kills me to see produce go to waste if somebody can use it.” The gleaners, 250 strong, start out picking greens in late April and end the season picking apples after the first frost in fall, says St. Andrew’s local coordinator Bill Walker. Their harvest, plus what they’re given by vendors at tailgate markets and the WNC Farmers Market, totals 300,000 pounds and goes to 80 organizations across the state.

Who's Coming to Dinner?

Among the diners enjoying a hot meal each Wednesday in the basement of Swannanoa United Methodist Church, some are there because the pantry at home is bare. But there’s no way to tell which ones are there because of need, and that’s by design. The Welcome Table, run by volunteers using donations and a small grant, prides itself on opening its doors to all who want to come. “People from all walks of life sitting down with the homeless—this is what I like to see,” says Jackie Kitchen, a Swannanoa resident who for five years has presided over the kitchen with hugs, laughs, and a big stirring spoon. Sadly though, many people close to the issue of hunger in our area say it’s largely an invisible problem. Most don’t realize that the people sitting alongside them in church or living next door may be struggling to get enough to eat. “There are elderly. There are handicapped people. And a lot of children,” says Susan Sides, who manages the charitable Lord’s Acre garden in Fairview. When MANNA FoodBank randomly sampled people receiving food, it found that 33,000, or nearly one-third, are children. And then there’s the MANNA study which found that 36 percent of households receiving help include at least one employed adult. But, says MANNA Communications and Marketing Coordinator Joshua Stack, they face tough choices: “You’re choosing between rent, mortgage, putting gas in your car to go to work, and food.” When churches in Fairview started talking about creating a local food bank more than a dozen years ago, “None of us thought there was a need,” remembers Sides. “It was a small town.” They soon discovered otherwise. The first six months of this year, Food for Fairview, bolstered by fresh organic produce from The Lord’s Acre, served 168 families.