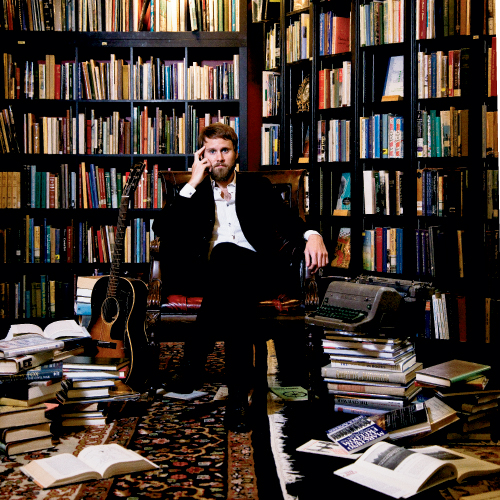 Ben Lovett released his first album, Highway Collection, three years ago. Or rather, he started releasing it, and even now, he’s still not done with the full rollout. Sure, the audio versions of the songs were unveiled simultaneously, in proper fashion. The record is a pop smorgasbord with nine distinct, polished works, but Lovett also pledged to produce a video for every one of them. Now, he’s finished six and has three to go, with two of those nearing completion.

“Once I made a commitment to this project, I realized that I had to make it work,” Lovett says. “There was no other option available to me.” Not that anyone could fault him for what the videos have done so far, which is solidify his status as a rare breed of musical multitasker. “I keep a lot of pots on the boil,” he says, and each of the videos he’s produced so far has generated its own kind of heat.

To begin with, there was “Eye of the Storm,” a brooding number that sprang to life on the screen after months of painstaking production. The computer effects-heavy video, with a steampunk motif, quickly went viral and garnered awards. It was followed by  “Heart Attack,” a blazing party video that was arranged, shot, produced, and released in just a week.

Lovett followed with ever-more-elaborate productions, music videos that started to defy the confines of the genre. And all the while, he’s stayed busy scoring other folks’ films. “I’m a part-time musician, part-time filmmaker, part-time all this stuff,” he says, “but my main thing is that I’m a storyteller. I believe in the importance of storytelling, that it was the original technology, besides maybe fire.”

A Georgia native with a slender but taught frame, a (sometimes) quiet intensity, and bountiful energy, at 36, Lovett already seems uncannily experienced. During a lengthy sojourn in Los Angeles, he produced music and video for acts as varied as Ike Turner, Wu-Tang Clan, and Bad Religion, while becoming increasingly involved with his own composing, cinematography, and songwriting.

In 2009, Lovett temporarily landed at Asheville’s Echo Mountain Recording to compose the score for a campy MTV movie, My Super Psycho Sweet Sixteen. The renowned studio struck a chord with him, and helped draw him into a big decision: He’d leave Tinsel Town for WNC.

“There’s kind of a gravity to Asheville,” Lovett notes. “My orbit around here has finally closed.” He likes the people, the seasons, the vibe. “One of the reasons I moved from L.A. is that I want to have a life more than I want to have a career,” he says. “Here, there’s a lot of enthusiasm for art in general, and people are very supportive of what you’re doing. I feel that part of that is an extension of the quality of life.”

And while Asheville might offer plenty of the good life, it hasn’t stemmed Lovett’s prolific output. Echo Mountain is now “where my tent pole is planted, where all of my projects have a home base,” he says. He’s customized a production suite there, which he calls his “toy chest.” And indeed, there’s plenty of gear, analogue and digital, to play with: a century-old piano and pump organ, scads of amps, a “mega-Moog” synth and pedal creation of his own, even some tiny music boxes. “It’s full of little, odd melodic instruments that aren’t good for most things, but they’re perfect for some things,” he says.

Lovett has a new series of songs in the works, which, he predicts, will be more performance- than video-oriented. To pay the bills, he’s continued to score films, including two sequels to the aforementioned MTV movie and a host of highly regarded independent productions including Black Rock, Sun Don’t Shine, and The Last Lullaby.

But Lovett’s main passion has been directed at crafting the Highway Collection videos, making each one of them a little masterpiece, with its own concept, approach, and sometimes unexpected outcome. “The process of the videos for Highway has been this exploration of the medium itself and what you can do with it,” he says. “If you have songs that really tell a story, then you’re in a whole different ground, where it’s not really a movie and not really a music video.”

One of the album’s musical stories, “Ghost of Old Highways,” showed just how far Lovett can stretch the genre. The video (included below), shot in the WNC mountains at Black Balsam, portrays a layered saga of Civil War-era love and loss. As it happened, the video outgrew the music. “During the course of making it, we realized, ‘Why force this story to be anchored along the pace of this three-and-a-half minute song?’” Lovett remembers. So he and his crew made an 11-minute short film that wove the song in and out instead. The unconventional creation took a year to produce and ultimately reaped wide acclaim, playing 20 film festivals in four countries and winning 10 awards.

Lovett is quick to point out that “Ghost” and the other videos wouldn’t have been possible without help from hundreds of friends and volunteers. “I get a lot of credit for things that I’m not responsible for,” he says, “except that I do have an instinct for combining people, for pairing ingredients with an idea.”

Lovett’s yen for collaboration is showcased in another of the videos, “Black Curtain.” An Edwardian-era fever dream shot in a weekend blitz at Asheville’s historic Masonic Temple, the production drew on more than 60 volunteer crew members and scores of local extras. Lovett remembers the experience as “three days of organized chaos” that left him wondering, “How is this ever going to get done?”

He’s comfortable with that level of uncertainty, though. “I believe in that formula, because in rock ‘n’ roll, there has to be an element of danger, and this is rock ‘n’ roll filmmaking,” he says. “There has to be that slight sense that it could all go horribly wrong, and when it doesn’t, you feel rewarded.”

Lovett recruited Asheville-based filmmaker Paul Schattel to direct the shoot. “‘Black Curtain’ was insane, actually,” Schattel says. “My whole thing, in my work, is to not exceed my grasp or my resources. The surprising thing with Ben is, he doesn’t think like that. He subscribes to this idea that if you try to be bold, mighty forces will come your way. He thinks big, and because of that, big things happen.”

After three years of thinking big about the video potential of Highway Collection, Lovett says he’s eager to finish the project but has no regrets that it’s been such a long haul. “I probably would never have attempted this if I had known how difficult it was going to be,” he allows, “so I’m glad I didn’t know. If my foolish ambition is other people’s entertainment, so be it.”

GHOST OF OLD HIGHWAYS from Lovett on Vimeo.