Home /State of the Nation

State of the Nation

State of the Nation: After an unprecedented internal health assessment, the Eastern Band of Cherokee Indians expands its approach to wellness 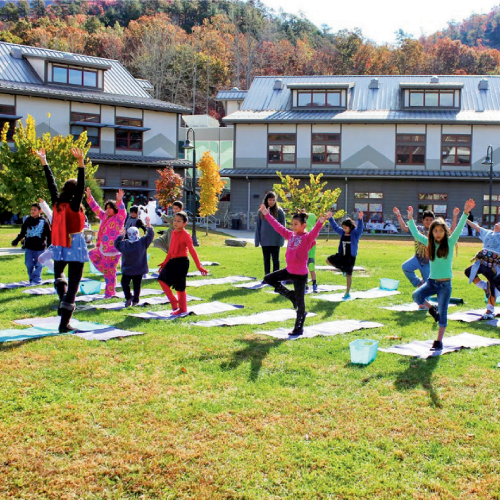 Recent years have mostly smiled on the Eastern Band of Cherokee Indians, with gaming revenues strengthening public infrastructure and cultural institutions. Yet for decades, the tribe couldn’t fully assess its actual quality of life. Fortunately, that’s no longer the case: In the summer of 2013, a team of specialists completed the EBCI’s first tribe-specific health survey. “We’ve always had some data, from the federal Indian Health Service, but a lot of it wasn’t really our data,” explains Aneva Turtle Hagberg, operations director for the tribe’s Public Health & Human Services division. “We needed to know exactly what our people thought their health concerns were.”

Now they know. The Tribal Health Assessment surveyed 795 of the EBCI’s some 14,800 members. “We got a good cross-section of people, and all this data is helping us look at the broad spectrum of all the tribe’s needs,” Hagberg says. The assessment, she notes, was only the beginning of a long-term plan to improve the community’s health—one that’s “led by the tribe, for the tribe,” as the assessment report puts it.

Some of the findings were tough medicine. “We asked the hard questions and the direct questions,” says Hagberg. The answers pointed to deep-rooted problems like high rates of diabetes, hypertension, obesity, and other serious maladies. Concerns about substance abuse also loomed large and weren’t exactly surprising: National studies have indicated that Native Americans are four times as likely to die of alcohol-related causes than average Americans.

When Hagberg was growing up on the reservation in the 1960s and ’70s, the stigma surrounding alcoholism made it hard to talk about it among tribal members. But now, “I don’t think it’s taboo; I think it is what it is,” she says. “We’re able to say, ‘There is a problem here; there’s been a problem.’” Still, the recent spike in prescription drug abuse, which has hit communities throughout WNC, compounds the issue.

Consequently, Hagberg says she’s taking a hard look at the double-edged sword of gaming proceeds. Each year, members of the tribe receive the so-called “per capita”—their share of gambling profits, which currently totals about $8,000 per person. When younger people get their “big money,” as members sometimes call it, some splurge on drugs, leading to a rise in overdoses. “We’re definitely seeing a pattern here,” Hagberg says. “I think the per capita has been wonderful, but there is a downside to it.”

To counter such ills, the EBCI is beefing up its behavioral health approach by hiring more therapists and investing in preventative education and addiction services. And here, funds generated by the casino have proved crucial. “We can do more to fight this, especially because of the gaming dollars,” Hagberg says, adding that it’s hard to see how the assessment could have been done without such backing. “The casino has made us able to make tremendous strides, to actually go out on home visits, to community meetings, to roll this out.”

As the public health team turns to making improvements, it’s moving on many fronts. The tribe’s first new hospital since 1981 is slated to open in early 2016 and will boast expanded services and state-of-the-art medical technology. Michell Hicks, the EBCI’s principal chief, says that the new facility “represents the future of our tribe, and it will give us an opportunity to be a more healthy people than we’ve ever been before.”

Meanwhile, Hagberg’s division is growing and doing what it can to keep tribe members out of the hospital to begin with. To implement recommendations stemming from the assessment, Public Health & Human Services is expanding its staff from 190 to 220 employees and seeking an accreditation that will allow it to take over the tribe’s local social services, which heretofore have mostly been managed by Swain and Jackson counties. It’s also breathing new life into a slew of community programs including free exercise classes, youth sports, home health services, and domestic violence prevention.

A key program that meets multiple wellness goals is Healthy Roots, which runs a half-acre youth garden and another plot at Cherokee Middle School. Joey Owle, the project’s director, says that the objectives are to increase the supply of fresh, local produce and change young people’s relationship with food. Applicants to the program tripled last year, and Owle says the results have been tangible. “We eat the produce right out of the garden, and by the end of the summer, the kids go from being turned off by vegetables to saying, ‘Wow, these are actually pretty tasty.’”

Such initiatives, Hagberg says, help strengthen not only the public’s health but also the tribe’s interdependence, which is a key Cherokee value. “If somebody needs something, we come together as a community,” she says. “You know that old saying, ‘It takes a village.’ We believe in that and want to take care of our own.”