Splash-tacular: With a long history in tow, Lake Lure Ski Club keeps up the action 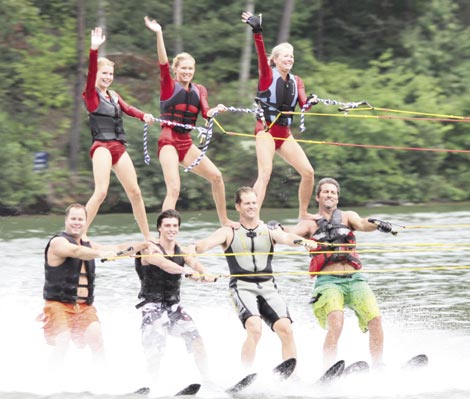 Anyone who’s attempted water skiing knows how challenging it can be just to stand up. It makes the acrobatic stunts and airborne flips of a high-energy ski show even more impressive. For one such spectacular display in the mountains, head to Lake Lure, where the region’s oldest water skiing club performs shows in June and July, with a season finale in August during the Hickory Nut Gorge Olympiad.

Most of Lake Lure Ski Club’s 40 or so members—ranging in age from three to 70—capture audiences with wakeboarding tricks, slalom skiing on one leg, and the team’s trademark human pyramid stunt. Other highlights include a ballet, which features graceful, choreographed jumps and spins, and a barefoot skier who will execute a 360-degree backspin on the water. “It’s a pretty technical stunt, and the crowds always love it,” says club president George Smith, who has a few tricks in his pocket too. He will skillfully attempt sharp turns and maneuvers to ski a lap around the boat towing him.

The club dates back to 1963, 40 years after the sport hit the water. The club began when Richard Kimberly shared his knowledge of show skiing with a small group of teenagers, including George Bond. An original member and past president, Bond remembers how he and others installed the ramp and slalom course, put on weekly shows, and traveled around the Southeast to compete in sanctioned tournaments. “It was the biggest draw to Lake Lure at the time,” he says.

Ina (who only goes by one name) was another founding member and is now the club’s oldest. “Back then not too many people skied, so it was pretty exciting,” she recalls. “The beach would fill up with spectators and we’d have the kids collect gas money for the boat.”

Over the years, membership dwindled and the club disbanded in the 1970s. It has been revived twice since, most recently in 2006, when members installed a sinkable slalom course on the north end of the lake. Now, a new generation is breathing life into the group, says Smith. “This is a social club, and we do it for fun, but we still plan on putting together some really entertaining shows.”