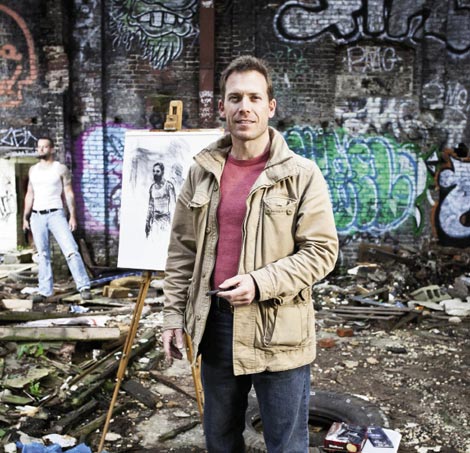 When England-born painter Julyan Davis purchased his spacious abode in Asheville’s Montford neighborhood in 2003, he was surprised to discover he was buying the house from singer-songwriter Peggy Seeger. Both her brother, Pete Seeger, and husband, Ewan MacColl, are and were legendary folk singers in the United States and England respectively. He found it fitting, since his own father was an accomplished folk musician. For Davis, that musical influence came to the fore during college, when he began painting canvases based on old sea shanties, ballads, and folk songs. It’s a theme that’s carried through his work ever since.

After graduating from London’s Byam Shaw School of Art in ’88, Davis learned of a 19th century colony of Bonapartist exiles who had settled in Alabama. Thinking that he might write a novel based on these French expatriates, he followed their trail to the Deep South.

Though the book never developed, an appreciation of the South’s fading byways and forgotten landscapes did. The austere scenes found expression in a series of paintings depicting the noble loneliness of abandoned buildings and muddy fields. “I look for things that people would not look at,” he says. “I like that kind of messy thing you run into—buildings that are run down inside.”

In 1995, Davis settled on Scaly Mountain near Highlands, where he kept a studio for 10 years, finding inspiration in the surrounding woods and waterfalls. The idyllic paintings that resulted proved commercially viable, but he always felt pulled toward less romantic scenes. “When I first came to the States, the risky paintings were the interiors and urban landscapes, but I would always paint them,” he says. Those grittier images are what he’s become known for.

Davis’ latest “ballad” paintings, as he refers to them, are largely figurative, most often depicting a couple inhabiting a highly charged atmosphere. They invite the viewer to imagine a story line between the two. Davis says the challenge comes from conveying a story in a single image. “There’s a lot in these paintings,” he says. “I’m really drawn to the dysfunctionality of the South. It has all those Celtic idiosyncrasies: the contradictions, the passionate people—the culture of honor is big. It’s straight out of these old ballads. The ballads of the South have their roots in Celtic culture. All these paintings are about being trapped by your surroundings.”

Davis approaches his work much like a photographer or filmmaker, getting the clothing and characters just right and waiting for the key moment, then taking hundreds of photographs to use as a starting point. “I pull from all kinds of references, but work from memory and imagination in the end,” he says.

A couple of years ago, a visit to Maine and the Farnsworth Art Museum’s Olson Farm was a revelation. That was the site where Andrew Wyeth worked on many of his paintings. “I was walking around and, for the first time, realized he had been a huge influence on my work,” Davis says. He remembered that his godmother had shown him a book of Wyeth’s paintings when he was very young, after which he executed a series of Wyeth-like interiors. “A lot of people think his work is sentimental, but it’s not,” he notes. “It’s quite melancholy.” The mood of Davis’ latest work displays a similar pathos and turmoil.

“These paintings deal with the darkest things in one’s life. The reason I started painting the ballads again is that my life is turbulent,” he confesses. Still, that doesn’t stop him from painting beautiful scenes, but he understands the artist’s need to follow their heart wherever it leads, even into the darkest corners.