Sound Travels: The Galen Kipar Project wants to take you on a scenic ride 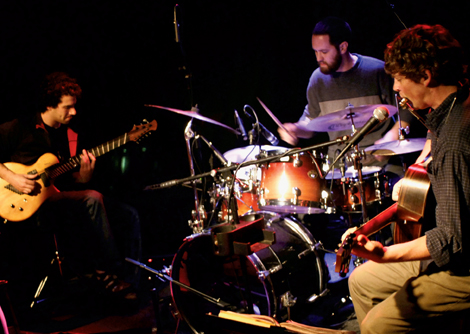 Like countless artists in Western North Carolina, singer-songwriter Galen Kipar finds inspiration in this region’s compelling landscape. The force of a rushing river, the solitude of the wilderness, and the surprise of an October snowfall turn up in lyrics on the latest CD from Asheville’s Galen Kipar Project. Titled The Scenic Route, the eight-song album continues the band’s fusion of folk, jazz, and classical elements, creating a sound that’s intricate and memorable, sophisticated and relaxed. “Headed on down to the waterside, going to find a place to rest my mind,” Kipar sings in “Riversong,” which adds viola and electric guitar to the band’s acoustic core. Guitarist Kipar, eight-string guitar/bass player Jon Morrow, and drummer Jeremy Young all studied music at area colleges, and Kipar’s arrangements draw on his background in classical composition. The band’s fourth album in five years includes ace Asheville musicians contributing on flute, strings, lap steel, and piano. “It comes from an honest place,” Kipar says about the album, which the band will release May 27. No matter where you’re headed, The Scenic Route is a trip well worth taking.