The Songbird : Whistling champion Phyllis Heil is never without a happy tune 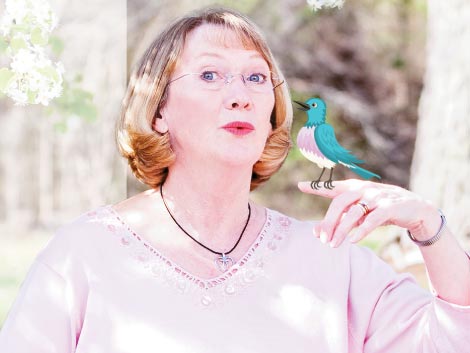 Phyllis Heil’s career as The Whistling Woman almost whistled past her.


While growing up in Virginia, her mother, who preferred she sing gospel hymns, didn’t allow her to whistle. “She said a whistling woman and a crowing hen always come to a bad end,” Heil says, chuckling. It wasn’t until 2001 that Heil, who lives in Hickory, began to warble. After several years of practice and a repertoire that included gospel songs, patriotic tunes, and carols, she felt primed for public performance. In 2004, she entered the International Whistlers Convention in Louisburg, North Carolina, and took third place among the female grand champions. The following year she was named International Whistling Entertainer of the Year, an award she’s won five times.

Now, with her husband, Chuck, as roadie, The Whistling Woman travels to churches and retirement centers to whistle love songs and big band favorites. She’s produced four CDs, appeared on The Tonight Show with Jay Leno, and whistled at the Andy Griffith Playhouse in Mount Airy. (“The Fishin’ Hole,” the theme of The Andy Griffith Show, is one of Heil’s most requested songs.)


Even with the accolades, “it’s a hard sell to get anyone to appreciate that whistling is an art form,” she says. “I joke and say I play the puckallo.”


All kidding aside, she’s reminded of how soothing the sound can be when she sees audience members close their eyes and sway to her renditions. “My goal is to uplift,” Heil says. “Wherever I go, whatever I do, I try to uplift the spirit.”

Visit www.thewhistlingwoman.com for more on Heil.