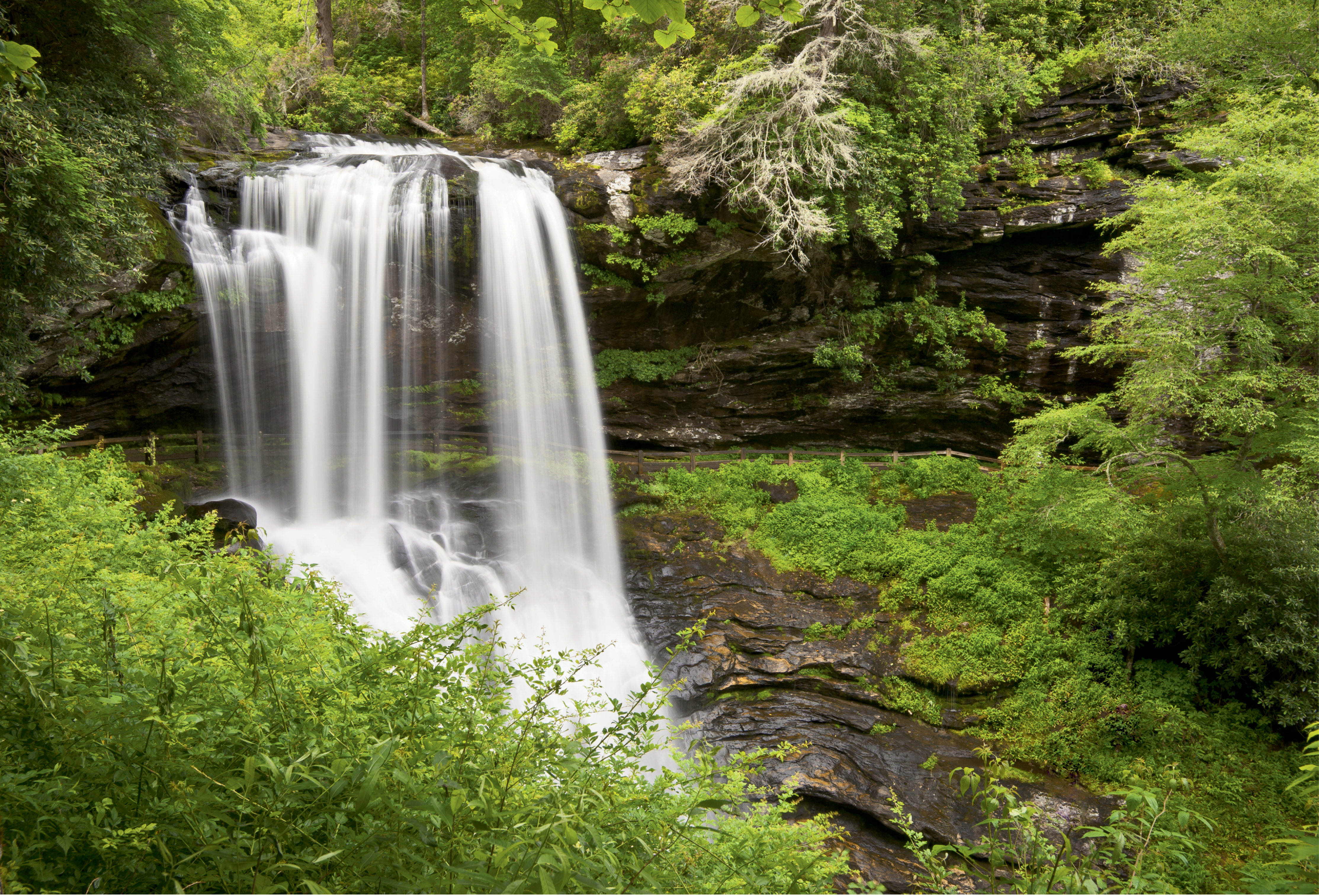 The deep, narrow chasms pinched between steep ridges—known as gorges in the South—are beloved features of the Blue Ridge landscape. Sure, compared to the large canyons of the west, they may seem like mere gashes, but look closer, and they’re no less inspiring.

Visit any one of them—here we showcase five in Western North Carolina—and witness why these geologic impressions run even deeper than they appear. Eons of weather and Earth’s constantly shifting forces have carved these shady ravines into some of the region’s most impressive natural features. They are domain to gushing waterways, virgin forests, five-star trails, rich history, lavish views, and a reservoir of exceptional creatures.

The gorges are worlds unto themselves, supporting some of the most unique ecosystems on the planet. Fortunately, many of these fantastic yet fragile environments are protected, including the Linville Gorge, the state’s third largest federally designated wilderness area, which was established in 1964; and the rocky domes and cliffs of Rumbling Bald in the Hickory Nut Gorge.

Get to know each gorge’s key features and more, because there’s never a better time than the present to explore the dramatic terrain of Western North Carolina’s deepest attractions.

The Linville River’s cascading entrance down a multitiered, 150-foot falls to its namesake gorge is as dramatic as the following 12 miles, in which the wild waterway twists through 11,651 acres of federally designated wilderness before it empties into Lake James and the Catawba Valley near Morganton. On average, the rim of the gorge hovers 1,400 feet above the floor, which is accessible only on foot. Along the way, the river is shadowed by towering rock formations such as Table Rock, Hawksbill, and Shortoff. Less obvious is a stellar collection of unique flora, including Heller’s Blazing Star, a rare fire-dependent plant, and hundreds of acres of old-growth timber.

Why go?
Linville Gorge is among the wildest and most scenic places in North Carolina, with remote trails and long-range vistas.

Key things to see:
The summit trail to Table Rock, with long views, is the go-to hike, and the easy walk to the spectacular Linville Falls is a must. Experienced hikers should explore the depths of the gorge or its eastern rim along a section of the Mountains-to-Sea Trail.

Best time to go:
Any season

Each of the seven canyons that dissect the Jocassee Gorges region, located in Transylvania County on the North and South Carolina border, provides a taste of the remoteness and sensational topography of the Blue Ridge escarpment—the wall of mountains that separate WNC from the Piedmont. Each stream begins as a trickle but soon bursts through sheer terrain to eventually form Lake Jocassee. The spectacular cascades pummeling over cliffs and bordered by steep forested ridges have resulted in an array of exotic plants and creatures that flourish in crevices, on north-facing walls, and in the mists of waterfalls. Treasures here include the pink-flowered Oconee Bell, an uncommon wildflower that grows only in this region, as well as bald eagles, black bear, and Whitewater Falls—the tallest cascade east of the Mississippi.

Why go?
To explore acres and acres of wild land

Key things to see:
Rainbow Falls, near Sapphire in Gorges State Park, is just one of dozens of five-star waterfalls gushing through the steep canyons of the Jocassee Gorges. Established in 1999, the 7,500-acre Gorges State Park protects one of the most remarkable regions of the state.

In 1829, the General Assembly allocated funds for the Hickory Nut Turnpike (aka Drover’s Road), used to drive livestock to market. Today, rather than hogs, cattle, and stagecoaches, what is now US 74-A abounds with motor vehicles. Still, it’s easy to escape the bustle and examine the rocky skyline of the gorge, including sheer cliffs, granite domes, and extraordinary rock features of the broad canyon, from your car or on foot. A popular spot for rock climbers, the gorge has been a tourist destination for more than a century and recently experienced a frenzy of conservation activity, such as The Nature Conservancy’s protection of the 1,100-acre Rumbling Bald Preserve that’s now part of Chimney Rock State Park.

Why go?
Witness awe-inspiring topography at this family-friendly gorge with easy access.

Best time to go:
Year-round. Moderate temperatures make this an ideal outdoors destination, even in winter.

It’s easy to garble the pronunciation of Cullasaja (cool-uh-SAY-juh), but this gorge’s beauty is unmistakable. The root of the name derives from the Cherokee word for the sweet gum within the seed pods of honey locust trees. Situated between Franklin and Highlands in Macon County, the river plummets 1,300 feet down a section of terrain that’s geologically unique, cutting through metasedimentary rock that may be nearly a billion years old. In fact, the erosive forces of wind, rain, and ice that crafted our gorges are still in action and easy to witness by automobile along a 7.5-mile section of the Mountain Waters Scenic Byway within the Nantahala National Forest.

Why go?
To witness firsthand the geologic forces that craft gorges

Key things to see:
Walk behind Dry Falls and drive under Bridal Veil Falls, where the changing light and lovely colors make this an ideal destination for photographers.

Best time to go:
It’s perfect in the summertime, when the microclimate is relatively cool.

The Nantahala is perhaps the most famous river gorge in North Carolina due to a combination of exceptional scenery and recreational possibilities. Based in the heart of the gorge, just outside of Bryson City, the Nantahala Outdoor Center is one of the nation’s pioneer white-water outfitters and arguably the birthplace of the Southeast’s rich paddling culture. The river is among the most accessible white-water runs in the region, and seated in a boat with a paddle in hand is among the best ways to experience a deep gorge. River running, however, isn’t the only outdoor activity on offer—there’s also fly fishing, zip-lining, mountain biking, and hiking.

Why go?
To take advantage of the one of the South’s recreational hot spots

Key things to see:
Raft the Nantahala River or ride the Great Smoky Mountains Railroad from Bryson City. Hikers should consider the strenuous trek to the nearby 5,062-foot Cheoah Bald along the Appalachian Trail.