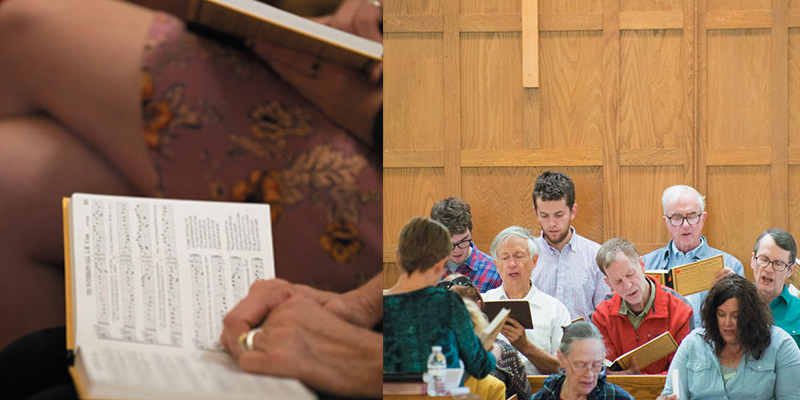 “With regular music, all the musical notes are round,” says old-time musician Laura Boosinger, “but with shape-note singing, the notes are different shapes. You learn the tones associated with the shape, and you learn to sing.” She learned the technique from the late Quay Smathers (Smathers-Jolley’s father), a legendary advocate of shape-note singing in the South who led the Old Folks Day sing-alongs for decades. In 1981, Smathers received the North Carolina Folk Heritage Award for his work in preserving this Appalachian art form in churches, schools, and colleges.

Smathers-Jolley says that everyone is welcome and can participate—just bring a covered dish and your voice. “Our type of shape-note singing in our region is called Christian Harmony and is based on a seven-note system,” she explains. “We sing a little lower and a little slower, with a similar ornamentation and embellishment you hear in old Appalachian ballads.”

At the church, singers perform in the choir loft, organized as a square, with each side representing tenor, alto, melody, and bass. “The music comes at you from all sides,” says Boosinger. “It’s incredibly powerful.”