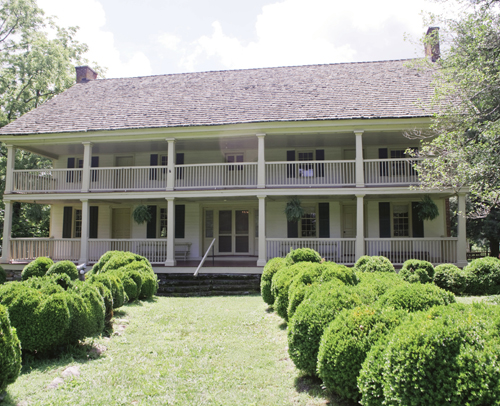 All too often, mountain history is portrayed partially, with an emphasis on the white folks who settled here and helped shape the region. Not at the Historic Carson House, a true time capsule in Marion that captures the legacies of both prominent figures and the traditionally marginalized.

To be sure, the house’s myriad exhibits—which present hundreds of items of antique art, furniture, farm tools, pottery, quilts, and more—pay plenty of homage to the family of John Carson. A Scots-Irish immigrant who built the home in 1793, Carson and his kin established a plantation and helped pioneer political and civic life in McDowell County and beyond. But that’s just one facet of the place’s complex history.

“I wanted to put a different spin on what happened here,” says Jim Haney, a retired historian who’s long served on the board of the nonprofit that maintains the house. And by different, he means more complete. “When the Civil War started, the census records that 18 percent of the county’s residents were slaves,” he notes. In the 1840s, the Carson property housed 14 family members and 68 slaves of African descent.

Haney curated one of the permanent exhibits, Bondage & Resistance: Slavery in the Up Country, which reveals little known details about the challenges and perseverance of slaves in WNC. It makes no bones about the violence and injustice of enslavement, while honoring the lives and accomplishments of African-Americans under both slavery and newfound freedom.

The display showcases rare and well-preserved quilts crafted by slaves owned by the Carsons and other families in the area, along with masterfully produced works by enslaved blacksmiths, carpenters, weavers, and wood-workers. And it shines light on the triumphs of McDowell’s post-Civil War black residents: people like Simon Lewis Carson, born in 1882 to former slaves, who became one of the most notable surgeons in the country after moving to Washington, D.C.
The diversity and authenticity at the Carson House are the product of locals—white, black, and otherwise—who care deeply about local history, says Executive Director Linda Cloherty. While the site has received some funding from the McDowell Tourism Authority, it’s mostly maintained by scores of private volunteers and supporters.

The house has become a place for homecomings of diverse family lines—for the Carson family’s white descendants, the slaves’ black ones, and the mixed-race others that surely resulted but were rarely spoken of at the time. Its genealogy library, fittingly, is open to and used by all of them today.