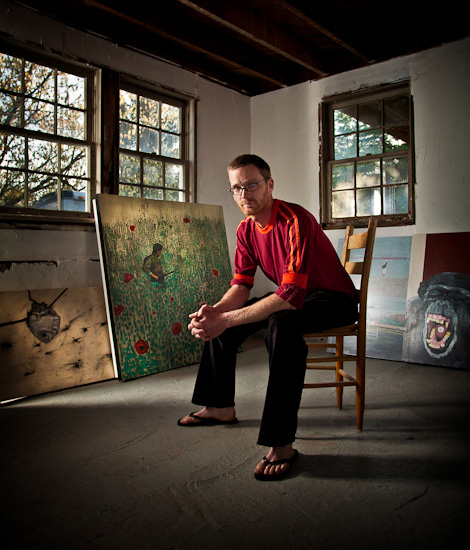 Of Severn Eaton’s recent paintings, one sticks out to him as representative of a common theme. The work, acrylic and ink on wood panel, is a portrait of a figure framed from the neck up, dressed in Hamas garb with a black face mask. The image oozes menace, except for one thing: The figure sports a headband bearing a logo for Life is Good, the popular outdoor apparel company famous for its whimsical stick figures and positive message.

The juxtaposition of a threatening symbol of violence and an innocuous emblem of American consumerism is jarring. As with many of his paintings from the past year, the work relies on dark irony to express a sense of American guilt and responsibility. “I was in the car listening to a depressing suicide bombing or IED casualty story on NPR,” Eaton recalls in his soft-spoken and contemplative manner, “and I pulled up behind a car with a Life is Good bumper sticker on it. I’m often overwhelmed by contrasts like that throughout the day.”

A North Carolina native, Eaton studied sculpture at Appalachian State University and received a master’s of fine arts from UNC Chapel Hill in 2003. After working as a studio tech in the art department at Cornell University in New York, he eventually settled in Asheville with his wife and two young sons and began focusing on painting. Like the piece described, Eaton’s work develops as a collection of daily experiences and the issues on his mind. “If I’m lucky, at some point during the day an idea will present itself as a spark,” he says. “And if it’s a clear enough concept, it will stick with me, and I’ll develop it.”

Other paintings depict a field of tall, delicate flowers with a rifle-toting Afghan soldier walking through it, or a beehive suspended from a tree branch, swarming with tiny combat helicopters. In another, a man in a surgical mask stands behind a grocery store checkout counter injecting an unknown substance into a chick. The contrast in such paintings isn’t subtle, and for Eaton, the impetus behind his work is clear communication.

“I feel like a lot of people are put off or intimated by artwork because it doesn’t make any sense to them,” he says. “I don’t want to be overly ambiguous or confusing. I want to get my ideas across to people in a clear way.”