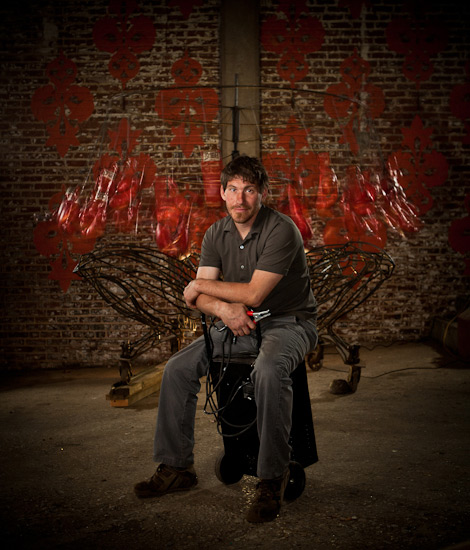 Sitting at a bistro table inside the gallery that he and fellow artist and girlfriend Melissa Terrezza opened in downtown Asheville, Sean Pace’s words are interrupted by a passerby peering in the front window at his piece, Death Slapper. The kinetic, surrealistic sculpture is part airplane with a spring-mounted skull where the nose would be. When a switch is flipped, springs underneath quake and a rod spins rubber chickens. It’s caught a viewer who shouts through the glass, “I like that piece, man.”

It’s hard not to be captivated and entertained by Pace’s work, which includes the legendary Chicken Shooter. A piece from his senior exhibit in the undergraduate fine arts program at UNC Asheville, the sculpture is composed of salvaged objects and metal, including the rear-end of a motorcycle that creates a Mad Max-esque machine gun. If you’re lucky, you’ve seen it in action outside Pace’s studio in the Phil Mechanic Building, hurling rubber fowl at his piece The Boxer, a carousel of hanging boxing gloves supported by five muscular looking metal legs.

Influenced by Marcel Duchamp, as well as Mel Chin, Tim Hawkinson, and Jean Tinguely, there is humor, absurdity, and inventiveness in his massive, animated sculptures that are designed to erase the line between artist and spectator.

“I try to catch people with something that is young and kinetic—the movement catches them. That’s the candy to lure them in, but I want to give them the full square meal,” explains Pace. That meal is a discussion that goes deeper into his comments on subjects ranging from the amount of waste society produces to the sedation he sees in people’s lives, what he calls the “sofa culture.”

“A piece is a dialogue; It has to be smart, funny, enticing, and attractive. At the same time, it has to deliver to the audience what it means,” says Pace. “It’s a great proof for an artist to deliver them to the next portion of the conversation.”

He intends to continue and expand on that conversation at the gallery by showcasing his joint projects with other artists. “If I collaborate with Ted Harper on a piece, that piece will have a flavor. A body of work with collaboration develops the artists and their repertoire.”