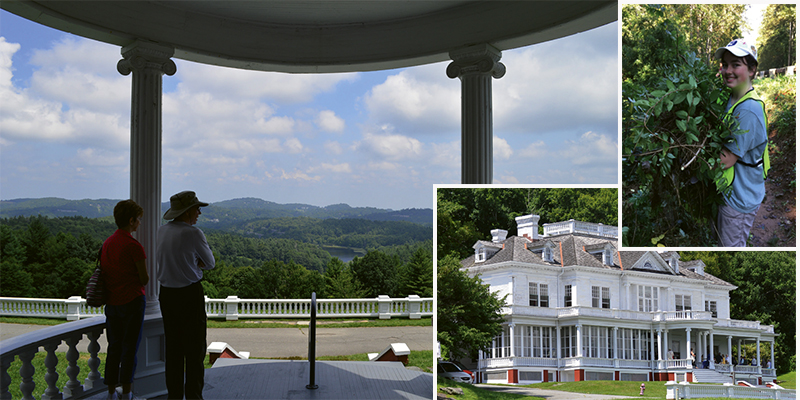 The mansion at Moses H. Cone Memorial Park, one of the foundation’s biggest restoration projects; (above right) a member of the new volunteer corps helps clear a path by the parkway.

Growing up in southwest Virginia, Blue Ridge Parkway Foundation Executive Director Carolyn Ward remembers going for Sunday drives on the parkway, a picnic in tow. “I didn’t know it was a national park,” she says. “I just knew it was a special place I went with my family.” Now, she says, “It’s a great responsibility and a great honor to protect it.”

For 20 years, the BRPF has been doing just that. While the parkway has a number of supporting partners, the foundation was formed specifically for philanthropic support. Although it’s one of the country’s most visited scenic roadways, the parkway charges no fees. And with so many facilities and other assets along the route, federal funding is often outpaced by the need for updates and improvements.

Since its inception, the foundation has raised over $12 million for infrastructure projects, education and outreach, and cultural and historic preservation and programming. One of the most ambitious projects is the restoration of Moses H. Cone Memorial Park, a $3 million, multiyear initiative that’s already underway. This year, the foundation also launched its own volunteer corps, dedicated to trail clearing and serving as parkway ambassadors.

The parkway is often cited as a regional economic driver, with a 2016 study finding that visitors spend over $95 million annually in nearby communities. But the foundation promotes more affective values: the parkway’s rich biodiversity, cultural significance, and place in the hearts of those who visit it. The iconic road is “a storehouse of memories,” Ward says, and she invites all who’ve enjoyed the parkway’s past to visit www.brpfoundation.org to discover ways to safeguard its future.