Home /Saturdays at the Mill

Saturdays at the Mill

Saturdays at the Mill: Childhood memories and the ashes left behind from WNC’s great era of textile mills 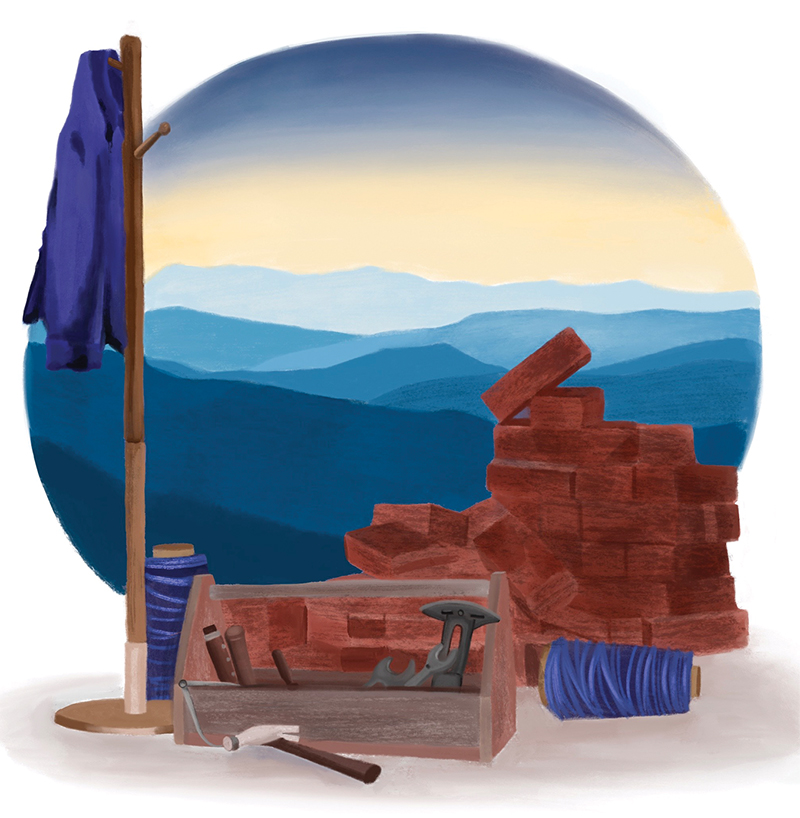 From as early as I can recall, my father and mother both worked in a hosiery mill. He was a machine fixer and she a knitter. Though they didn’t always work at the same mill, occasionally they did, and for a while they worked together at Broadway Hosiery Mill on East Court Street in Marion, the town where I grew up and still live. Sometimes they worked on Saturdays, and when they did, I came with them.

In the mill, the warm air smelled of machine oil and cotton dust, and the knitting machines chattered continuously. But to me, the heat, odor, and noise seemed natural and didn’t deter my enjoyment.

On Saturdays, the few workers seemed to take little notice of me, so I had the run of the place. I would jump into a pile of white socks, soft and linty, spreading them asunder and raking them over me like a blanket. And I’d play with my father’s bench vise, testing its pressure by placing my hand between the cool, oily jaws and turning the handle. Occasionally I would clamp too tight and mash my fingers, but the discomfort didn’t faze me.

When my mother reminisces about this mill, she recalls, “I liked it because we was close to town, practically in town”—and that’s also why I, too, liked it best of all the mills where my parents worked.

One of the charms of the mill’s location was its proximity to the town’s cinema, the House Theatre, where my mother sometimes took me to see a Disney movie. On Saturdays when I grew restless in the mill, I would wander outside and look up the street, where I could see moviegoers entering the theater for the matinee.

One such day I spied my school friend Kathy and some other kids congregated in front of the theater, all dressed up. I hadn’t been invited to Kathy’s birthday party that year, as I had been the last, and I watched the celebrants from afar, feeling dejected. Maybe I mentioned this disappointment to my parents, because on a following Saturday, one of them proposed, “Why don’t you go to the movies today?”

The marquee announced The Three Lives of Thomasina was showing, and boy was I delighted. With the money my father gave me, I bravely walked to the theater and bought my ticket, stopping by the lobby concession stand for a snack before taking my seat in the dark auditorium. I felt a little peculiar to be sitting by myself, but I wasn’t afraid. I felt courageous and proud that my parents had given me this opportunity.

A few months later, I was standing in the school lunch line when I noticed the principal and a teacher conversing. I overheard the words “fire in town” and felt a sense of dread. Somehow, I knew my parents’ mill was involved.

That evening when I came home, I learned that a blaze had started in the feed and seed store that adjoined the mill, and had quickly spread. Today, my mother remembers that the mill workers were alerted to the fire by heat emanating from a wall between the businesses. “We seen bricks getting red-hot,” she says. “I grabbed the lunch I’d packed, but my pretty blue coat burned up.” Through the years, she has often lamented losing this wool coat that matched the color of her eyes.

Soon after the fire, which consumed the store and the mill, my father went back to the rubble to recover his toolbox. He brought it home to show our family, and when he rummaged through the charred tools, his troubled face and quavering voice betrayed his hurt feelings. A former Merchant Marine who had served in World War II, he was a tough man, usually reserved in his emotions. This day, however, I saw a different side of him, and his sadness made me sad, too.

The fire destroyed more than a favorite coat and a valued toolbox. It also stole from my parents a workplace that they genuinely liked and the livelihood it provided for our family. Of course, they found new jobs, as hosiery mills were plentiful in 1960s Western North Carolina.

Still, there would never be another mill that I enjoyed so much as I did Broadway Hosiery Mill. I won’t forget those Saturdays when I jumped into a pile of socks or played with my father’s vise or ventured alone to a movie theater. The fire took the mill away, but it didn’t steal my memories of a special place and time.