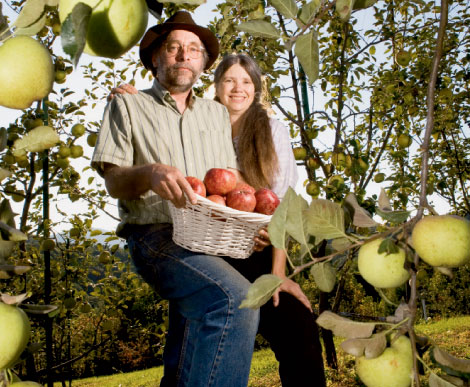 The tree was worn, neglected. It clung to a hem of cow pasture, gray limbs scabbed with lichen and branches chewed away by rot. Still, it was managing to produce apples—small, puckered fruits that were unlike anything Ron Joyner had seen before.

“It was 75, maybe 100 years old, and it hadn’t been pruned or maintained in probably 20,” Joyner recalls of the tree he spotted on a neighbor’s property. Determined to find out what it was, he consulted books, e-mailed experts, called friends in heirloom apple circles, and at last had a positive identification.

“It turns out we had found the Josh apple, right here in Ashe County,” he says. The Josh, a Scottish apple, enjoyed a brief heyday in the 19th century. On the slopes of nearby Little Phoenix Mountain, a welcome area of warmth in one of the state’s most frigid corners, a local family once grew the Josh in quantities sufficient to make brandy. By 2007, only one of those trees was left. Now Joyner was climbing it, pruners in hand, hoping to get enough healthy wood to grow a sapling.

For 15 years, Ron and his wife, Suzanne, have made their living collecting, propagating, and selling heirloom or antique apple trees. The couple’s Big Horse Creek Farm near Lansing, a winding 30 miles north of Boone, is a refuge for nearly 350 distinct varieties of heritage apples, each one of them available for sale. They are fruits for which commerce no longer has a use. “I view what we’re doing here as our legacy,” says Ron. “Long after we’re gone, these trees will be here.”

Diversity’s Decline
The common apple, Malus domestica, descended from a wild fruit native to what is present-day Kazakhstan, in Central Asia. It was one of the first fruits to be domesticated. By the 18th century, apples were being grown on every continent save Antarctica. Variability was central to the fruit’s spread; apples varieties are not determined by seed, so, through pollination by bees, each apple holds the possibility of a new combination of traits.

Today, there are believed to be roughly 15,000 named varieties of apples, a staggering diversity that is well-adapted to local needs. There are apples for eating, apples for drying, apples for baking, dense-fleshed apples that can be stored through winter, and sprightly, astringent apples ideal for cider.

Beginning in the 20th century, though, the old varieties came up against a deadly foe: a market that valued expedience over taste. Today, most apples are picked young, chilled, gassed with a ripening agent, and shipped to far-off destinations. Peruse any produce aisle and the varieties you’ll see are unvarying: Granny Smith, Fuji, Gala, and Braeburn. They look good, are uniform in appearance, and ship well. But there is little in this economic model to allow for sentimentality; no room on the shelf for an apple with a russet skin, an odd shape, or—bless its heart—a name like Green Cheese.

Rare Breeds
While living and working in the Raleigh area in the early 1980s, the Joyners reached out to Chatham County apple collector Lee Calhoun, author of Old Southern Apples, a compendium of 1,500 varieties. Calhoun became a mentor, generously schooling the couple about antique varieties, their individual merits, and the care required by each. All the Joyners needed was land, and in 1985 they found it. The couple visited Ashe County while scouting white-water paddling destinations, and the area’s beauty and remoteness kept bringing them back. In 1994, the business was up and running.

By commercial standards, Big Horse Creek Farm is negligible, amounting to just 300 apple trees on three sloping acres, a handful of pear trees, a few well-tended vegetable patches, and a flock of clucking hens. In fruit, though, the trees are a wonder; each trunk is grafted with several kinds of apples. Their names are a kind of poetry: Black Gilliflower, Brown Snout, Crow Egg, Disharoon, Hollow Log, Mammoth Blacktwig, Rattle Core, Rusty Coat, and Winter Banana.

With little in the way of outside help, last winter the Joyners grafted more than 4,000 apple cuttings onto hardy rootstock, cultivated the saplings all summer, and will ship them in late fall. To date they’ve mailed their heirloom saplings to every state except Hawaii and North Dakota.

Still, not every variety can be saved. Despite the Joyners’ care, the Josh story didn’t end well. The grafted saplings withered in time, and not long after losing them the couple learned that the original tree had died. “I figured it would live another 20 years,” laments Ron. “To lose it, that really bothered me. It weighed on me.”

Other outcomes have been happier. Several years ago, the Joyners began reviving Virginia Beauty, a variety that first came to light in Carroll County, Virginia, about the time of the War of 1812. With its purplish skin and sweet, fine-grained flesh, Virginia Beauty has since become one of their best sellers, with 100 or more of the formerly endangered trees now in cultivation across the region.

On Saturdays this time of year, the Joyners carry apples down from the mountain to the Ashe County Farmers Market in West Jefferson, where they sell them in samplers made up from a dozen or more varieties. The bags of fruit trigger memories, the concentrate of history in each crisp bite.

“We have old-timers from this area who will ask us, ‘Do you have the Virginia Beauty? The Transparent? The Early June?’ ” explains Ron. “And when we say ‘yes’ their faces just light up. They have memories of these apples that go back to childhood. These are the same apples they ate years ago, the same trees they climbed. It’s an almost mystical connection.”