Home /Rise of a Superpower

Rise of a Superpower

Rise of a Superpower: Built to supply energy for defense industries during World War II, Fontana Dam became a monument to American ingenuity and determination 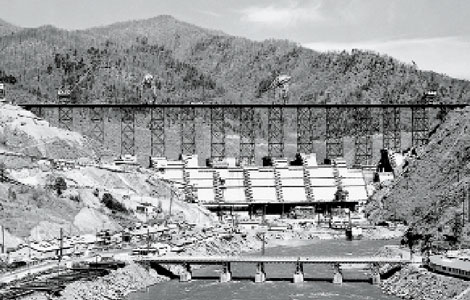 In 1942, the headlines were daunting. The entire world was at war. In the Pacific, fierce sea battles were being waged in places now synonymous with heroism—Midway, the Battle of the Coral Sea, Guadalcanal. In the Atlantic, German U-boats were sinking Allied ships by the scores. War was raging from El Alamein and Tobruk in Africa to Stalingrad in Russia. General Eisenhower, commanding the European Theater, was preparing a major advance into France and Germany. The Allies were fighting decisive battles on multiple fronts, so American resources and industry quickly became a valuable asset.

At home, every available opportunity was being availed to support the war effort. Defense strategists put the aluminum plants in Alcoa, Tennessee, to military use for the production of metal for aircraft. And nearby, in an almost unheard-of place called Oak Ridge, the top-secret Manhattan Project was building its uranium enrichment plant to supply material for the first atomic bombs. Both required enormous amounts of electricity.

The Tennessee Valley Authority long had ideas about building a hydroelectric dam at Fontana but it was an extremely expensive project. As the war escalated and United States involvement seemed certain, plans for the dam moved forward at lightning speed. Just three weeks after the bombing of Pearl Harbor on December 7, 1941, the first trucks were heading into Fontana to start construction.

The endeavor wouldn’t be easy. The site for the dam was on the upper reaches of the Little Tennessee River in a remote and rugged corner of the Smoky Mountains. There was only a winding, one-lane dirt road to the site and the nearest railroad was 35 miles away.

What’s more, they weren’t building just any dam. At 2,365 feet wide and 480 feet high, this dam was going to be taller than most skyscrapers of its day and it would require three million cubic yards of concrete. Also, there wouldn’t be a conventional spillway, rather water would drain from the reservoir through two gigantic spill pipes, each 34 feet in diameter. The task would require thousands of workers laboring around the clock, seven days a week to meet an accelerated war schedule.

About 500 men living at on-site camps began the work, but as the dam grew, the labor force swelled to almost 5,000 workers from all over the country, many of whom brought their families. A new town virtually sprouted in the wilderness. The former settlement called Welch Cove quickly evolved into a thriving community with a village-like atmosphere and included a post office, library, school, and grocery, as well as a beauty parlor, barbershop, movie theater, sports fields, hospital, and even a small jail.

The majority of the workers were men and most, understandably, were older than draft age. While it wasn’t always easy to lure workers to such an isolated spot, for many locals, the building of the dam provided much needed work.

In an August 2007 article for Inside TVA, an in-house publication for the Tennessee Valley Authority, Larry Maney of Fall Branch, Tennessee, recalled growing up on the Cherokee Reservation in the 1940s and how the dam affected his life. “We were a very poor family and times were hard, especially considering the impact of World War II,” recalled Maney, who noted that his family, like many others in the mountains, didn’t have running water much less electricity. “Employment was something that people would take just about anywhere they could find it. I don’t know how it happened, but Dad got a job working on Fontana Dam.” Maney, in turn, worked for TVA for 28 years before retiring.

With wartime gas rationing and few cars, most residents didn’t leave the village for months at a time. Everything possible was done to keep the workers comfortable, their families happy, and morale high. A public address system broadcasted music and news. The houses they lived in were top-of-the-line, prefabricated cottages and wonderfully modern, with new inventions like linoleum flooring and built-in stoves and refrigerators. Moreover, there was a prevailing sense of patriotism; that they were all working together on something of vital importance that supported the boys fighting on the front lines.

A dam the size of Fontana created an equally impressive lake. With an average depth of 130 feet, Lake Fontana is deeper than most and boasts roughly 250 miles of shoreline. To create this body of water, however, it required flooding a vast amount of property, which displaced hundreds of families. While they were paid approximately $20 an acre, it was still a difficult transition for some. Many of the families had lived on their land for generations. Most, however, understood it was a sacrifice needed for the war effort. They had brothers, fathers, and sons fighting overseas. And, like the Maney family, some found jobs on the work crews.

When Fontana Dam was finished in November 1944, the seemingly impossible had been accomplished. It had taken only 36 months to build. The team had met the demand of President Harry Truman who had said at the start of the project, “I want aluminum. I don’t care if I get it from Alcoa or Al Capone!”

Moreover, the dam was vital to the United States’ ability to withstand the critical needs of the last year of the war. The Alcoa plants were spinning out aluminum for new planes. After the Battle of the Bulge in Germany in February 1945, the Allies had the infrastructure to recover. The Axis did not. And through the power the dam supplied to Oak Ridge for the Manhattan Project, America created a weapon that forced the Japanese to surrender after Hiroshima and Nagasake.

The dam and lake it formed were not only majestic, they were a testament to American ingenuity, work, and sacrifice. With the generators producing a remarkable 228,000 kilowatts of power a year, it was the fourth largest hydroelectric facility in the world. A sign on the powerhouse still reads, “Built for the
People of the United States.”