Rediscovering Lincoln: A UNC Asheville professor makes a historical find in an image from Gettysburg 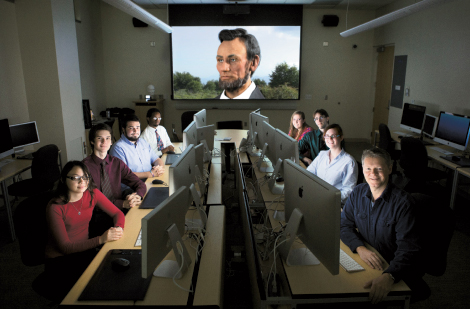 More than seven-score and 10 years ago, President Abraham Lincoln gave what many consider the most famous speech in American history—the Gettysburg Address. And after 150 years have passed, you might think that there’s little left to discover about that fateful event.

But you’d be wrong, according to Christopher Oakley, an assistant professor of new media at UNC Asheville who made a startling announcement last fall. Using a super high-resolution copy of a photograph from Gettysburg and some detective work, Oakley said he’d identified an overlooked image of Lincoln in the crowd that day in 1863. The find, an extreme rarity from among the handful of photos that document the day of Lincoln’s landmark address, prompted major stories in Smithsonian magazine, The New York Times, USA TODAY, and other outlets.

Was Oakley surprised at the outpouring of interest? “I was and I wasn’t,” he says. “Anytime you do anything with Lincoln, it garners attention. The surprise came at how quickly and how far it spread—all over the world.”

Oakley notes that not all Lincoln history buffs agree with his claims about the photo. “There is a good amount of debate going on, on the Internet especially, and it’s been mostly positive,” he says. “It’s something that’s really hard to show people in a quick sound bite, but when I show the entire presentation [about the findings], they usually come away pretty convinced that the discovery is genuine,” he says.

And his historical sleuthing is far from over, Oakley notes. Together with teams of UNCA students, he’s conducting an ongoing Virtual Lincoln Project that seeks to create a historically accurate multimedia depiction of everything that’s known about what occurred that day at Gettysburg. Follow the progress of the investigation at www.facebook.com/TheVirtualLincolnProject.