The Real Daniel Boone: Legends paint a larger-than-life picture of the woodsman, but at heart he was a simple man driven by curiosity 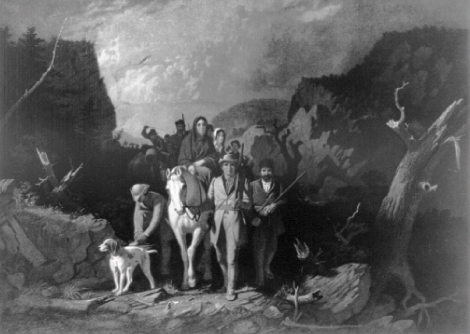 Daniel boone spent his life traversing yet another mountain and crossing yet another river into the unknown wilderness. Through the Cumberland Gap and beyond, his explorations not only opened up the lands west of the Appalachian Mountains for settlement, they made Boone internationally famous during his lifetime. In The Adventures of Col. Daniel Boone, an autobiography written in 1781 with the help of his friend and fellow explorer, John Filson, Boone struck upon his wanderlust in the opening sentence: “Curiosity is natural to the soul of man...”

Filson’s study of Boone was the first in a spate of books that would relate the frontiersman’s exploits. While Boone would aver that every word written in Filson’s narrative was true, differentiating the real man from the often romantic idealizations is cautious going. Even Boone admitted that much of what others had written about him was malarkey. “I would not believe that tale if I had told it myself,” he remarked about one published story regarding his supposed hunting prowess.

Even now, when we conjure an image of Boone, what comes to mind is actor Fess Parker wearing a coonskin cap in Disney’s 1960s Daniel Boone television series. The show’s lyrics add to our misconceptions: Daniel Boone was a man, a big man! With an eye like an eagle and as tall as a mountain was he!

In truth, Boone wore a beaver-felt slouch hat, he stood only about five-feet, eight-inches tall, and was raised as a Quaker. He was a modest, reasonably educated, good-natured fellow who rarely lost his temper and went out of his way to avoid conflict.

And while he was inextricably connected to the settlement of Kentucky, the Boone family’s base was Western North Carolina—and still is for hundreds of descendants. Daniel’s father, Squire Boone, transplanted his wife, their 11 children, and several relatives from Pennsylvania to the Yadkin River Valley in 1760. As the family grew prodigiously, the Boone name became synonymous with the North Carolina mountains. Boone and his siblings produced more than 100 children. In turn, he and his wife had 68 grandchildren. Even though he would move his own family numerous times, they repeatedly returned to their Yadkin Valley home.

That said, Boone was rarely at home no matter where his family resided. The woods were where he enjoyed being most. When he wrote in 1769, “I resigned my domestic happiness for a time, and left my family and peaceable habitation on the Yadkin River, in North Carolina, to wander through the wilderness of America,” he was relating an experience he would repeat time and again.

Boone, who lived to age 86, had a truly remarkable life. He was a man of enthusiasm and accomplishment. He led the first Kentucky settlers through the Cumberland Gap and cut the Wilderness Road so that others could follow. He fought Indians when there was no alternative, but when he was taken captive by the Shawnee, he became so beloved that he was adopted by the chief as a member of the family.

Recounting his various careers highlights his adaptability to the 18th-century frontier. He was an expert marksman and gunsmith; a hunter, trapper, and scout. He was revered as an Indian fighter and castigated as friend to the Indians (some called him a “white Indian” for his sympathies toward Native Americans). He was a trader, innkeeper and storekeeper, land surveyor, militia colonel, and Revolutionary War hero. He harvested and sold ginseng, and at various times made money sugaring maples, which he allowed was one of his favorite occupations. He even served in the Virginia legislature three times.

Boone was able to make large amounts of money from his endeavors—all of which he spent, lent without return, gave away, had stolen, or just plain lost. This occurred so frequently that he was in debt for most of his life. Some historians contend one reason Boone kept moving to new frontiers was to escape his debtors and legal problems. They have a point. At the time of his death, he was living in Missouri with his youngest son, Nathan, with barely a dollar to his name. The 10,000 acres Boone had been granted in that state only a year earlier had to be sold to pay off debts.

Boone was a complex soul; a study in contrasts. He was a loner who preferred the isolation of the forest, yet he was also a gregarious leader who enjoyed telling a good story and the companionship of others. Although he was rarely at home, he was every inch an affectionate and well-loved father and husband.

Roaming free
“I can’t say I was ever lost, but I was bewildered once for three days,” Boone quipped about his brief foray into the boggy swamps of Florida, so vastly different from the forests he knew. Yet when one considers the wildness of the North Carolina mountains that Boone was traversing in his teens, it amazes that he ever found his bearings.

At that time, Western North Carolina was still sparsely settled and virgin territory. The dense, primeval woods were teeming with bears, wolves, beavers, deer, mink, otter, panthers, and buffalo. For Boone, this untamed terrain was an Eden. As his father and brothers labored to carve out a homestead, Boone was hunting and trapping, bringing home substantial sums from the sale of hides and pelts. Game was so plentiful in those early years that Bear Creek in the Yadkin Valley is said to have received its name from Boone once having killed 91 bears along its banks. Likewise, the town of Boone was named for the fact that it’s where he frequently made camp.

It was also in the Yadkin Valley that Boone met his wife, Rebecca Bryan. She was the perfect match for him. Her family were neighbors and also Quakers. Five years younger than Boone, Rebecca was a tall, dark-haired beauty, and stories say that she was almost as good a marksman as her husband.

For the first few years of marriage, Boone stayed close to home as they established their farm and family. But eventually, curiosity would take him away from home. As President Theodore Roosevelt wrote, “Boone’s expeditions into the edges of the wilderness whetted his appetite for the unknown.” From 1769 onward, he was gone for long stretches at a time, once for as long as two years. Yet Rebecca proved to be equal to the task of running the homestead alone, whether it was in North Carolina, Virginia, Kentucky, or Missouri.

“Many dark and sleepless nights have I been a companion for owls,” wrote Boone through Filson, “separated from the cheerful society of men, scorched by the summer’s sun, and pinched by the winter’s cold, an instrument ordained to settle the wilderness.”

Whether or not Boone was, in fact, a wandering pilgrim ordained by God, his explorations opened the way for the settling of lands west of the mountains. He was the personification of what has come to be called the American spirit.