Raptor Rap: Turn your eyes to the skies this spring for a glimpse of WNC's fastest bird of prey—the peregrine falcon 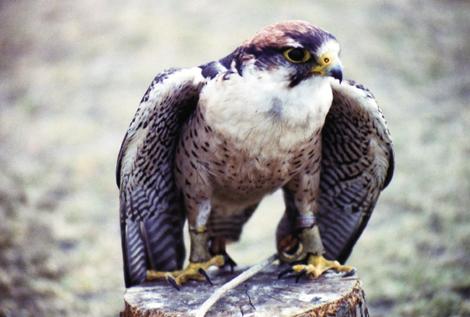 The peregrine falcon cruises at 3,000 feet. To attack its prey, the bird plummets at speeds that can reach more than 200 miles per hour, making it the fastest creature in the sky.

Adults, who can live into their teens, weigh about two pounds and have a three- to four-foot wingspan.

These fliers mate for life. The female, who is larger, flips upside down in midair to receive gifts of food during March courtship.

Both parents hunt, tend cliffside nests (such as those at Chimney Rock Park), and feed up to five chicks, which hatch April through June.

Since the insecticide DDT dealt the birds a heavy blow in the mid-1900s, wiping them out in North Carolina, restoration efforts and a ban on the chemical have prompted a comeback. As of 2006, North America was home to an estimated 3,200 nesting pairs. It’s believed that eight of those pairs live in WNC.

On the Lookout
Falcons are often heard before they’re seen, so learn their call by visiting www.allaboutbirds.com, then turn your binoculars on these locations through June.