Rapid Fire: Drop into one of WNC’s wildest waterways for nonstop action 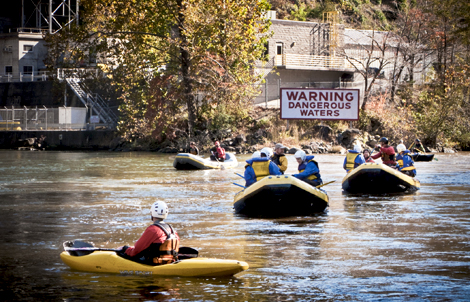 There’s a white gorilla on the bank of the Cheoah River that’s supposed to predict how our rafting trip will go. I’m sitting in a tough, rubber raft cruising through a relatively calm section of water, listening to my guide, Linc Stallings, wax poetically about the fortune-telling capabilities of this gorilla. “If we see his face, we’re in for a rough ride. If we see his behind, things will go smoothly,” Stallings says.

We paddle around a bend and there he is, a three-foot ceramic simian figure, standing on the edge of the river. Thankfully, we see his glorious, white butt.

It’s not a scientific forecast, but it’s comforting after paddling a mile of constant class III ledges and waves. And we haven’t even reached the tricky stuff yet. According to Stallings, things are about to get hairy.

The Cheoah is nine miles of almost continuous class IV+ white water in the far southwest corner of the state. It has big water characteristics (think high-volume, fast-moving rivers such as the Colorado through the Grand Canyon), and demands a high level of technical skill, like some of the tighter class V mountain creeks popular with kayakers. The variety and consistency of white water from put-in to take-out elevates the Cheoah to a must-go river.

“This is one of the most exciting rivers anywhere in the U.S.,” says Ken Kastorff, owner of Endless River Adventures, an outfitter that runs rafting trips on rivers across the Southeast. “I don’t know of another river anywhere that has the continuous quality of white water that the Cheoah has.”

even more significant, this river just got it’s flow back. For more than 50 years, the Cheoah sat dry, its natural flow trapped by Santeetlah Dam and diverted by hydroelectric pipes. During the man-made drought, kayaking and rafting boomed at the nearby Nantahala and Ocoee rivers, while a hardwood forest sprouted in the Cheoah’s riverbed.

“It was right under everyone’s noses,” says Kevin Colburn, the national stewardship director for American Whitewater, a boaters’ rights organization based in Cullowhee. “The Cheoah sits next to the Nantahala, one of the most popular rivers in the country, but it was completely forgotten by most boaters.”

American Whitewater and a coalition of local boaters and commercial guide services spent six years negotiating recreational dam releases with Alcoa Power and the Federal Energy Regulation Committee. The group eventually secured 18 releases a year. Five hundred private boaters showed up for the first release. Since 2005, these scattered flows have become religious holidays for kayakers looking for technical, pushy white water. Colburn considers the Cheoah’s return one of American Whitewater’s biggest victories. “We knew this river would be a significant resource,” Colburn says. “How often do you get to turn on the water in a river of this quality?”

it’s mid-november when I get on the river with adventure seekers from across the Southeast. There’s a mother-son duo from Atlanta who have run every other commercial river in the South. A couple of women on vacation from their husbands. A group of twentysomething guys from Charlotte who take one adrenaline-spiked trip a year. All have class-III river experience, which is required to raft the Cheoah.

The first mile and a half is filled with mellow class III wave trains and ledges running through scrub trees and brush that are too stubborn to submit to the water. It feels like we’re paddling through a forest after a flood. Boaters call this section Viet Nam. On the left bank is the pristine Joyce Kilmer-Slickrock Wilderness. On the right, runs a lonely stretch of highway with a few scattered houses.

After the brush, the white water gets more aggressive, with a series of class IV drops that demand perfect execution. Stallings barks orders like paddle “right two” and “left back” from the back of the boat as we hit Wilma’s Ledge, a six-foot tall low-head dam; Take Out, a series of shorter, technical drops; then Land of Holes, a mile of continuous rapids.

We paddle over ledges, punch through waves, and narrowly miss boulders. On some rivers, you can sit back and allow the white water to control your boat. The Cheoah expects participation. You have to fight to get your craft safely through the chaos. It’s all I can do to keep up with Stallings’ demands. With every rapid, I get a shot of cold water in the face as the boat rises and falls through the tumultuous waves. It’s the most intense white-water experience I’ve ever had. Then we come to Bear Creek Falls, a 12-foot waterfall spanning the width of the river. Suddenly, the Land of Holes feels quaint.

“If you get tossed from the boat over Bear Creek Falls, just ball up and ride it out,” Stallings says as we approach the rapid.

Most private boaters go straight over the falls on the left, but commercial rafts have to take the slightly gentler line on the right—a technical slide and drop combo with a massive rock perched in the middle that’s perfect for capsizing rubber boats. Stallings yells, “Forward two!” and we punch into the slot above the falls. I jam my feet into the crevice where the raft’s side and floor meet just as the river drops beneath me. The yellow nose of the raft goes over the horizon line and less than a second later, we follow. I lose my stomach in the fall, then find it again as we sink into the churning water at the bottom. I’m still inside the boat, but the front half of the raft is submerged from the force of the drop. The water is cold and bubbly; it’s like swimming in chilled champagne. I hold my breath and try to keep my toehold in the raft until the nose pops above the surface. Stallings is yelling again to paddle left. In a matter of seconds, we’ve cleared the falls and are carving our way through a succession of smaller drops and waves that eventually lead us into the calm water of Calderwood Lake.

Here, we all congratulate each other with high fives, then paddle slowly to the take-out. The two hours of nonstop white water has left me spent: It’s the crash after the high.

“Paddling the Cheoah is like running a marathon,” Stallings says, sensing our exhaustion. “When you get done, you feel like you’ve accomplished something.”