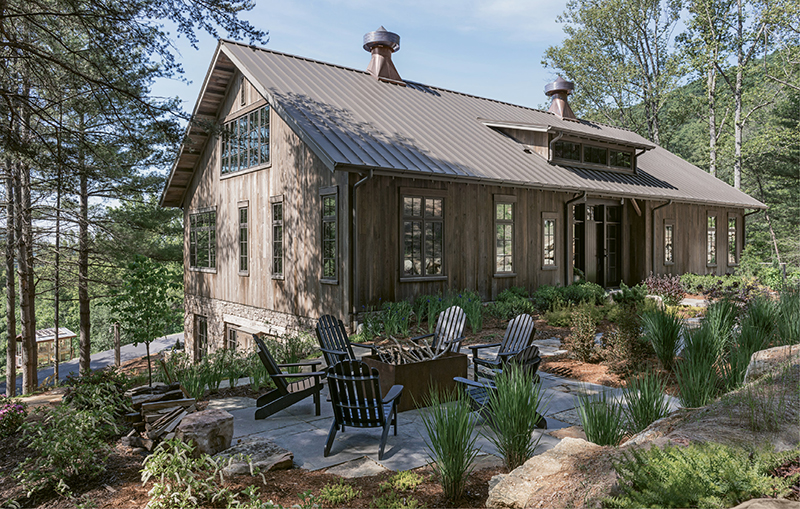 Outside-the-box thinking can lead to the most extraordinary results. That’s the case with a striking but understated home tucked into a cove in East Asheville, designed by Samsel Architects and constructed by Jade Mountain Builders.

It started with an idea: a barn. Not a particular barn, just a barn with a particular footprint—2,800 square feet. The homeowners were retiring and planning to move from their long-time residence in Orlando. There was no lot purchased, indeed not even a zip code in mind. Just the idea of buying an old barn and converting it into a contemporary home where the main living space would be on one floor.

“I am a general contractor and I know how to do this stuff,” says the husband. “We did this pretty backwards.”

The search for a barn led the couple to Heritage Restorations, a company in Waco, Texas, with scouts around the U.S. and in Europe focused on finding and purchasing old barns and other timber-frame buildings. They found the structure they were looking for on the company’s website: a circa-1870 dairy barn still standing and in good condition in Little Falls, New York.

It was, according to Heritage Restorations, an English-style barn “distinguished by queen posts and purlin plates with wagon doors on the long sides and not the gable ends.” This was the predominate style of barn built in New England after the Revolutionary War, a style that migrated into New York and the Ohio Valley along with early settlers. Barns like this are classic examples of vernacular architecture: their designers and builders were not architects but farmers and craftsmen who had learned skills passed down through generations within families and communities.

This barn was the right shape and size and was in good condition. The homeowners purchased it sight unseen. Now came the process of deciding where to put it and how to make it into a home.

The couple considered locales across the South, but finally settled on the four-acre lot where their home now stands in East Asheville. They’d visited the city many times when their daughters had attended summer camp, so they had some familiarity with the area. Once they purchased the property, the deconstructed barn arrived. 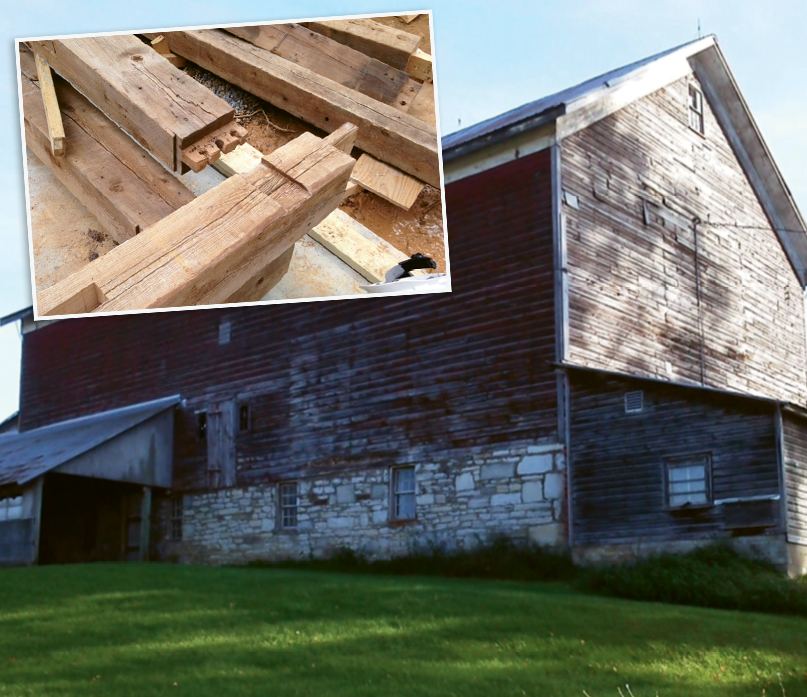 In many ways, the scene that played out over four days on the hillside in East Asheville was reminiscent of what had taken place all over the country in the nineteenth century. A team of builders hung from beams, using wooden mallets known as beetles and hand-fashioned wooden pegs (along with more modern hardware) to frame the house. There were some aspects of the framing that were a bit more twenty-first century—using a crane to tilt sections of assembled timbers into place, for example.

Samsel’s Duncan McPherson had created a design to fit into the 40-foot width. Leaving most of the central space open, the defined living areas include four cozy bedrooms and four and half baths. The design comprises a ground floor with a garage, en suite bedroom, and stairs leading up to the open main floor, with a kitchen-dining-and living area, library and office, the master suite, a guest bedroom, and a screened-in porch. The expansive main floor windows flood the space with light and take advantage of the spectacular views of the surrounding cove. Stairs to the top floor, where the barn’s hayloft once stood, lead to an open landing/den and another en suite bedroom. From bottom to top, the space spans around 38 feet in height. 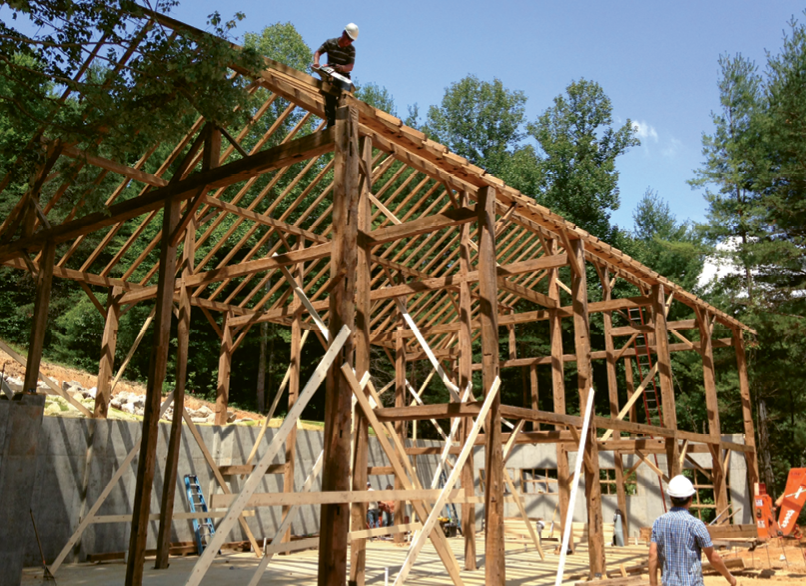 The barn nave was reconstructed to match the original, but with the addition of modern steel connections.

A Work in Progress

Over the course of 18 months, Jade Mountain undertook the construction, which was, says Jade Mountain principal Hans Doellgast, like “building a house around a timber frame.” The craftsmen who created the original beams worked with hand-tools, so each timber is unique.

“The measurements weren’t exact,” says the homeowner. “The surfaces aren’t even, so we had to be nimble and flexible. We were figuring out details every day. There was a lot of collaboration, and Jade was a huge part of that.”

“Working with so many unknowns and blending old and new, you can’t hire a sub-contractor. It takes real artists,” says Doellgast. One of the biggest challenges of the house was the roof, he recalls. In order to accommodate insulation, “we essentially built a roof over a roof.”

In some sense, the process of building this house was not unlike the building of the original barn: customized, personal, and relying on the instincts and know-how of the builders. “It’s some of the best craftsmanship I’ve been around,” says the homeowner. “They really treated it like it was one of their own homes.”

Aside from the original barn frame, the interior of the house uses reclaimed wood for the floors and other surfaces, including sliding barn doors, bathroom vanities and laundry room storage. The original ladder that led from the floor of the barn to the hayloft is incorporated into the design. Geothermal and passive solar keep the temperature in the house even despite the open spaces. Because of the height of the ceilings, lighting was a challenge. Jade Mountain came up with solutions and worked with Screaming Hot Iron to create custom pieces.

Having lived in the house for a few years now, the couple appreciates the craftsmanship that went into their home. Looking around each day, says the homeowner, he loves to see the marks chinked into the wood by those nineteenth-century builders, the hand of the maker still evident nearly 150 years later. It’s a testament to their skill, something that he especially admires as a long-time builder himself. But the skill of the current-day craftsmen makes day-to-day life in the house a pleasure, too, and the project sparked a long-term friendship between the homeowners and the builders. “Given that it was an intensely challenging build and the client was a project manager from the commercial world,” says Doellgast, “to finish the project as close friends is one of the things I’m most proud of.”