Home /Queen of the Hill

Queen of the Hill 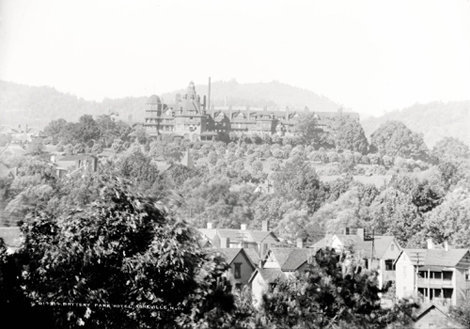 For 40 years, it was Asheville’s most prominent landmark, a multi-gabled splendor of Queen Anne lavishness that towered over the city atop historic Battery Porter Hill. Standing three stories high, with 500 rooms girdled by broad verandahs offering sweeping mountain views, Battery Park Hotel was a truly magnificent edifice. In its day, it embodied over-the-top elegance, including fireplaces in every room, replete with the newest inventions, including electric lights and elevators.

Asheville native and author Thomas Wolfe captured the sublime ambience of the hotel in his semi-autobiographical book, You Can’t Go Home Again. The description was told through the book’s main character, George Webber.

“George could remember its wild porches and comfortable rockers,” wrote Wolfe, “its innumerable eaves and gables, its labyrinth of wings and corridors, its great parlors and their thick red carpets, and the lobby with its old red leather chairs, hollowed and shaped by the backs of men, and its smell of tobacco and its iced tinkle of tall drinks.... George could remember, too, the smiles and the tender beauty of the rich men’s wives and daughters. As a boy he had been touched with the unutterable mystery of all these things, for these wealthy travelers had come great distances and had somehow brought with them an evocation of the whole golden and unvisited world, with its fabulous cities and its promise of glory, fame, and love.”

When Battery Park opened in July 1886, Asheville was gaining recognition as a tourist destination. Linked to the nation by railroad, it even had electric street cars (one of only two cities in the nation providing the transportation), with 17 miles of track radiating from Pack Square.

The city was not only ready for a grand hotel, its placement on Battery Porter Hill, a 25-acre promontory just west of downtown, was a touch of brilliance by magnate and entrepreneur Colonel Frank Coxe. Visitors already delighted in climbing the hill—formerly the site of a Civil War fortification—to take in the commanding views.

Coxe, who was born into one of Western North Carolina’s oldest and most affluent families, had increased the already sizeable family fortune through Pennsylvania coal interests. As a vice president with the Western North Carolina Railroad, he was largely responsible for bringing the rail line to Asheville, which opened the mountains to a wave of tourists. He was industrious, forward-thinking, and knew exactly what amenities the hotel should offer its wealthy guests. Through his personal contacts, Battery Park was immediately popular. It soon attracted the rich and famous from across the United States and Europe.

In addition to the luxurious accommodations, staff pampered guests with outstanding service. In 1903, The New York Times called it “one of the most perfect resort hotels in America. It is beautifully furnished and admirably managed. Its enormous sun parlor, overlooking the Balsam Range, is one of the most charming rooms imaginable. It has besides this long stretches of glass-enclosed verandas on each floor.... It is homelike and cheery in every nook and corner. Its table is of the best, and the service of the house is up to the metropolitan standard.”

In fact, George W. Vanderbilt II was among the guests the hotel attracted. It’s said that while enjoying one of the verandas during a stay in 1887, he pointed out the location where he would position his sprawling Biltmore Estate.

As Asheville became the premier resort city of the Southern Highlands, similar tourism-inspired growth followed, such as the Grove Park Inn, which opened in 1913. Yet sadly, the very boom that created the Battery Park Hotel led to its eventual demise.

After Coxe’s death, it was sold in 1922 to Edwin Wiley Grove. Although Grove had promised Coxe’s heirs that the hotel would continue operating as a resort, Grove ultimately razed the building and leveled Battery Hill. During the teardown, the hotel caught fire and burned, leaving rows of chimneys standing alone. On the flattened site, he constructed the Grove Arcade and a modern hotel which bore the same name as its predecessor. The more than 50,000 cubic yards of soil removed from the hill were used to fill in a valley and create Coxe Avenue and the Wall Street area.

Ashevillians mourned the destruction of both landmarks, and Wolfe described the outrage many felt in You Can’t Go Home Again.

“An army of men and shovels had advanced upon this beautiful green hill and had leveled it down to an ugly flat of clay, and had paved it with a desolate horror of white concrete, and had built stores and garages and office buildings and parking spaces—all raw and new—and were now putting up a new hotel beneath the very spot where the old one had stood. It was to be a structure of sixteen stories [14 actually], of steel and concrete and pressed brick. It was being stamped out of the same mold, as if by some gigantic biscuit-cutter of hotels that had produced a thousand others like it all over the country.”

Eventually, the new hotel became as popular as the former, with such luminaries as F. Scott Fitzgerald, O. Henry, and even Wolfe visiting. Musician Tommy Dorsey often played in the ballroom. Grove died in the hotel in January 1927, before the arcade was complete. Today, the former hotel is housing for seniors and is listed on the National Register of Historic Places.

Still, this newer building could never match the magnificence of the original. She was a grand lady in a grand era, and as The Atlanta Constitution wrote it in a 1904 article, “perfect in detail.”

Suzannah Smith Miles is a writer and historian living in Gettysburg, Pennsylvania.