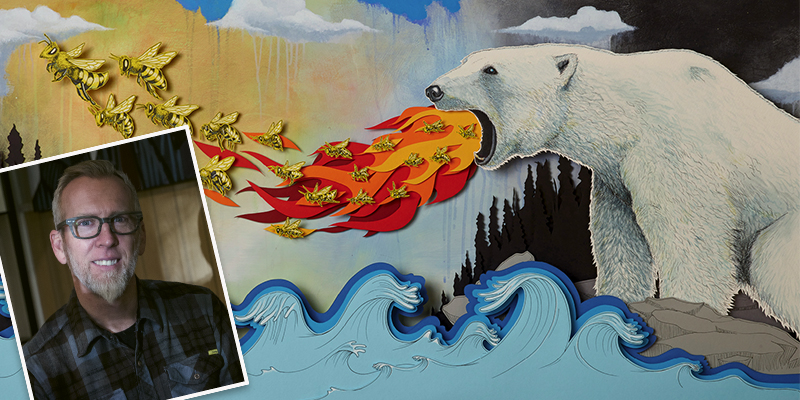 The mixed-media art of Leif Erik Johansen tells stories. Looking at work from the Weaverville-based artist, who uses materials including acrylics, oil, paper cutouts, pen, and glass, transports viewers to surreal landscapes, where bears fly through forests or men grow like islands out of the sea. For Johansen, tapping into such dreamscapes is what it’s all about: Inspired by surrealism and the illustrative style of artists like Ekundayo and Audrey Kawasaki, he was drawn early to the idea that art can be about anything. As a result, his work is populated by fantastic elements and bizarre-looking characters filled with authentic personality.

It’s easy to connect with these figures. Johansen does initial sketches until he perfects his characters, who inhabit water- and tree-filled landscapes. His animals possess wisdom and exert power, whether they’re materializing the effects of climate change (a fire-breathing polar bear in Uprising) or thoughtfully chewing grass (a silverback gorilla in Snowflake). “I consider myself a tree hugger,” Johansen says. “Humans feel a lack of connection with the environment because we believe it’s ours. As artists, we have an opportunity to create a conversation around this.”

Johansen has felt rooted in the natural world for a long time. Although he grew up in Connecticut and Florida and spent several years in Atlanta and Portland, Oregon, he eventually moved to Vail, Colorado, drawn by its beauty and snowboarding opportunities. After meeting his wife, Angie, the two took several trips that inspired the artist. His travels took him to Europe, then farther east, where he spent half a year in Southeast Asia, China, New Zealand, and Australia. China, in particular, was a turning point: “Everything there was inspiring,” he says, “and I had the sudden realization that I was an artist. I remember e-mailing a friend to tell him and being brought to tears. Writing it down made a difference.”

This came years after his struggles to fit into traditional educational molds. “Albert Einstein said, ‘Imagination is more important than knowledge,’” he notes. “It’s too bad that we don’t focus on that more.” When Johansen took his first painting class in his thirties, he felt the need to rebel against what he saw as unnecessary restrictions; he veered from a still-life assignment to produce an image of a woman similar to characters he paints today. “If I paint, it’s not going to be realistic,” he says. “I kept pushing until the teacher finally gave in.”

Today, Johansen shows his work mostly at juried festivals, including Miami’s Art Basel and Artisphere in Greenville, South Carolina, and he also focuses on family as his wife completes nursing school. But he always holds his artistic vision front and center: “My art is an extension of who I am,” he says. “My concerns, fears, joys, and even my sense of humor all come out in my work. I get better every time I produce something new.”

Find Johansen’s works online at www.leiferikjohansen.com and in person at