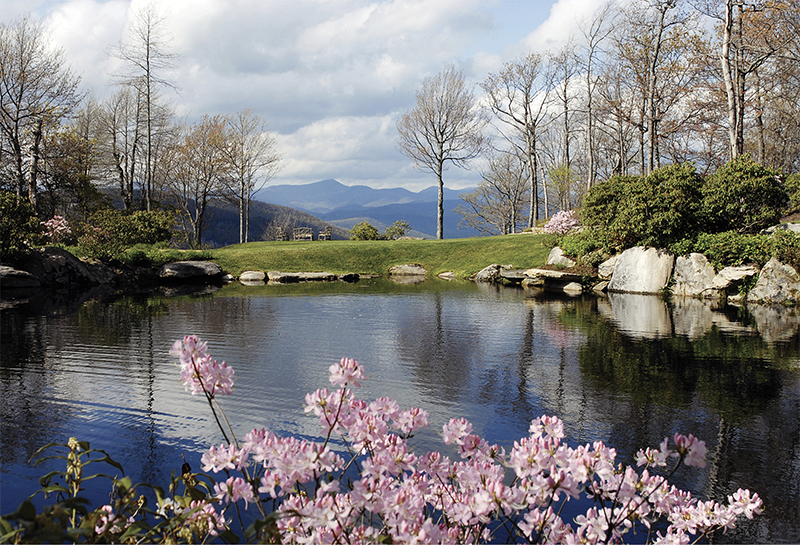 Walks in the Woods A trail and pond (top) are dedicated to the rare Rhododendron vaseyi—aka pinkshell azalea.

You don’t get to the Southern Highlands Reserve by accident.

At the end of a sometimes nearly vertical climb up a twisty-turny Toxaway Mountain road, the land levels off a bit. A set of understated stone pillars indicates something special lies just down the pebble drive. There, you are delivered into a botanical paradise.

The sense of anticipation, the surprise and delight that awaits, also doesn’t happen by accident. Some of the country’s best landscape architects were involved in the design of this native plant arboretum and research center, the Southern Highlands Reserve. 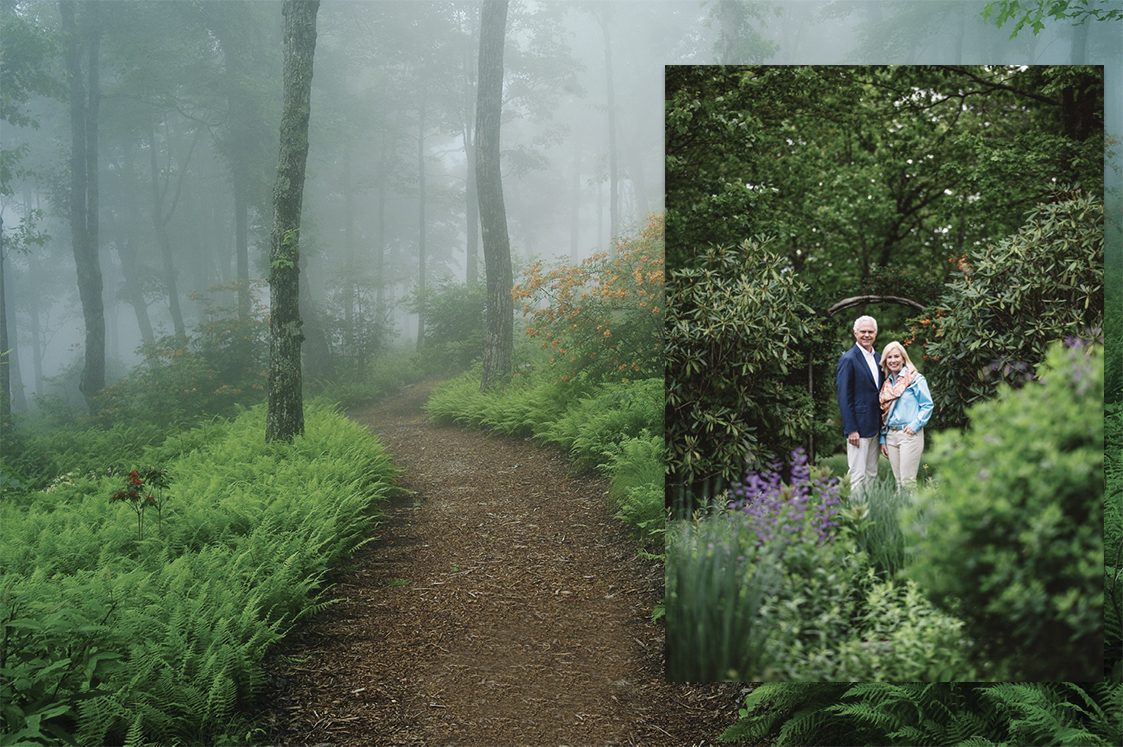 Walks in the Woods The Azalea Walk features dozens of native flower species, including azaleas in striking shades of red, orange, yellow, and pink; (inset) High Hopes Robert and Betty Balentine, of Atlanta, have poured their passion for nature and philanthropic spirit into the reserve.

The vision of Atlanta philanthropists Betty and Robert Balentine, this woodland garden was prepared very intentionally, but in a way, it was started through kismet.

After a stay at the Greystone Inn on Lake Toxaway in the late 1990s, the Balentines—dedicated lovers of the outdoors—decided to build a second home in the area, where their children could be in greater contact with nature. When they found their lot—sky-high with breathtaking views over the lake and into South Carolina—they were intrigued by what lay beyond it. There, various tracts of land back up to Panthertown Valley—10,000 acres of richly biodiverse wilderness that’s home to bears, bobcats, timber rattlers, and numerous rare plant species. 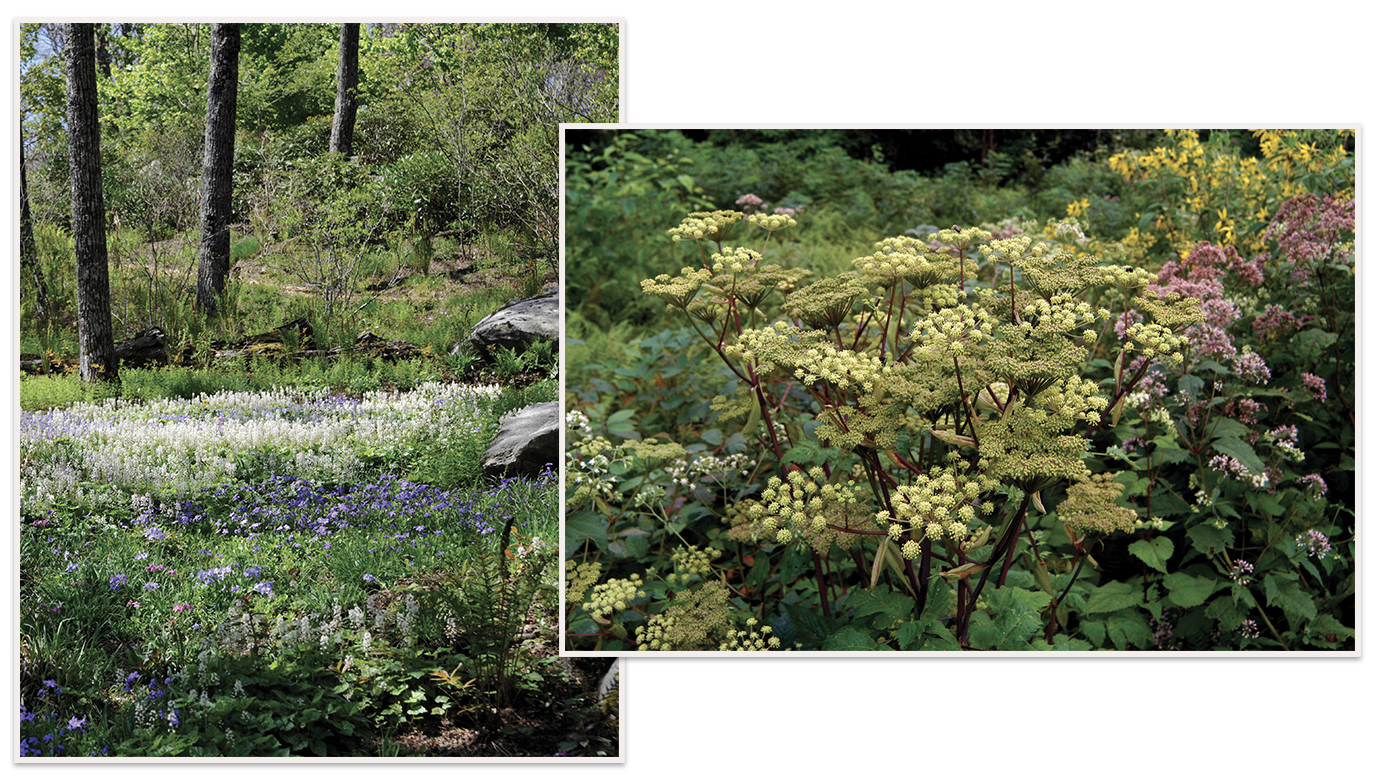 The mountaintop lots were scheduled to be developed, but the Balentines bought 120 acres and put them in a conservation easement with the North American Land Trust, with the chief aim of protecting and preserving them. Only after having the area surveyed did they find how truly special this land was, says SHR director Kelly Holdbrooks. They discovered the property included three spray waterfalls, numerous endemic species, and abundant wildlife dependent on this rare habitat.

At the end of the last ice age, glacial melt followed the spine of the Appalachians down to the tip of the Blue Ridge Escarpment, which ends here at this 4,500-foot elevation before the drop to the flatlands of upstate South Carolina. Carried in the melt were seeds of all sorts of plants from northern climates, some of which continued to thrive here for thousands of years. Plants such as the vaseyi or pinkshell azalea grow in few places outside this area.

In fact, says Lauren Garcia Chance, the reserve’s director of research and conservation, in terms of soil and weather, the SHR has more in common with botanical gardens in New England than it does with others in North Carolina. It’s one of only two high-elevation such gardens on the eastern seaboard, set in a chestnut-oak boreal forest. 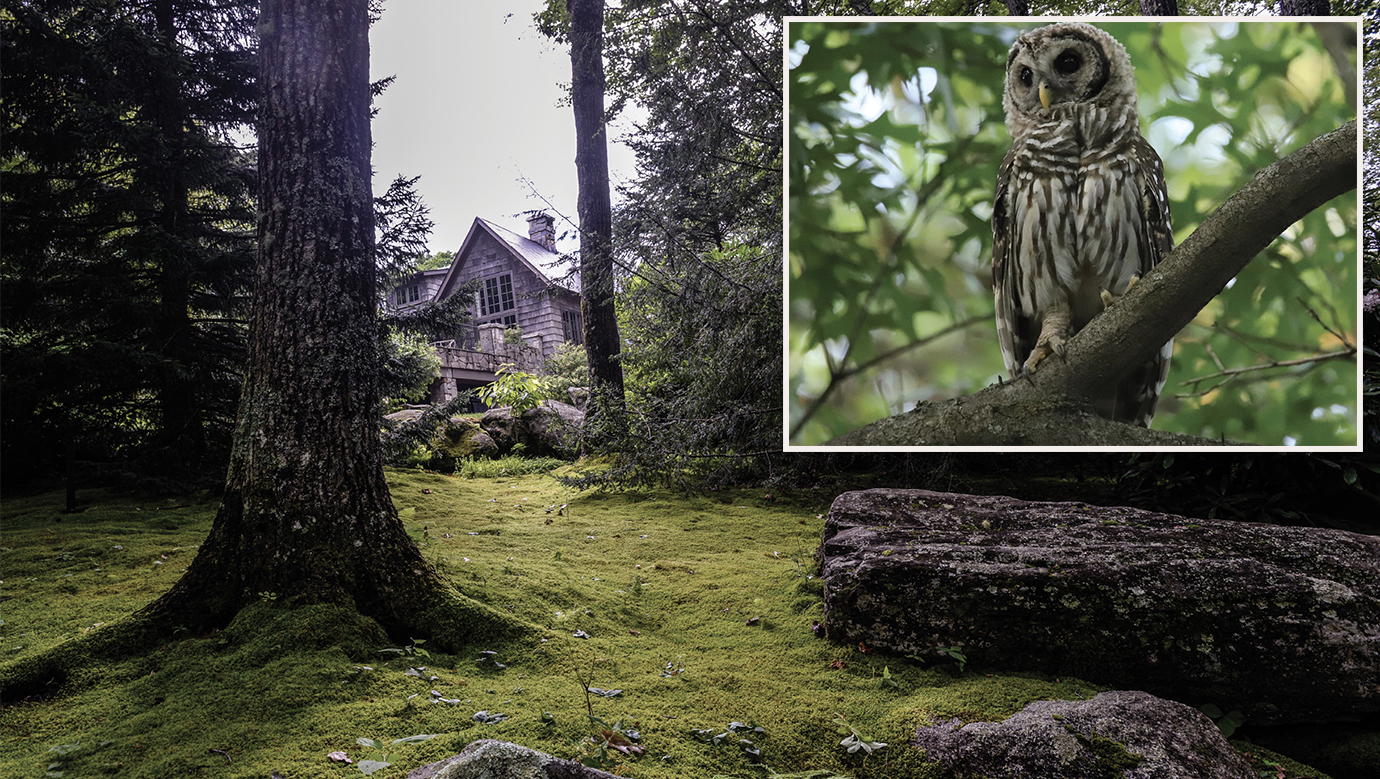 Propagation Station The reserve’s headquarters, The Chestnut Lodge, doubles as a workshop that SHR staff use to cultivate new seedlings during colder months.

Considering the high conservation value of the land, the Balentines decided they needed to share it and created the reserve as a nonprofit. Through the years, they worked with renowned landscape architects including Gary Smith, who developed the master plan, which includes the “core park” of the reserve with its woodland botanical garden featuring a labyrinth, as well as acres of trails. The pond area (with a spring that feeds the Tukaseegee River) offers stunning views that stretch from the peaks of Transylvania County all the way to Mount Mitchell. The garden now holds the largest single collection of Southern Appalachian native plants and their cultivars, says Holdbrooks.

It took six years to complete Chestnut Lodge, a refined homebase for the nonprofit, which now has several full-time staff, including director of horticulture Eric Kimbrel and gardener Kyle Meece. Here Holdbrooks and Chance keep records and share them with other public botanical gardens through a newly acquired grant-funded database. The SHR participates in national research and has created several conservation partnerships.

One of the initiatives Holdbrooks is most proud of is the reserve’s work to restore the red spruce, decimated in the South over the last century due to deforestation, acid rain, pests, and, more recently, climate change. High-elevation spruce fir forests in the Southern Appalachians are the second-most endangered ecosystems in the country, she says (this includes several types of firs, including those affected by the wooly adelgid blight). Red spruce are pivotal in this type of forest because of the habitat they provide for the Carolina northern flying squirrel, an endangered species that relies on this species for food and parasite protection.

While efforts to restore the red spruce have met with mixed success elsewhere, the reserve turned out to be the ideal place to grow them. Working in coordination with the Southern Appalachian Spruce Restoration Initiative, SHR is now growing over 4,000 red spruce seedlings each year in its nursery. Over 1,700 red spruce have been planted through SARSI, and the effort has a 90 percent success rate, far above average for restoration efforts of its kind. 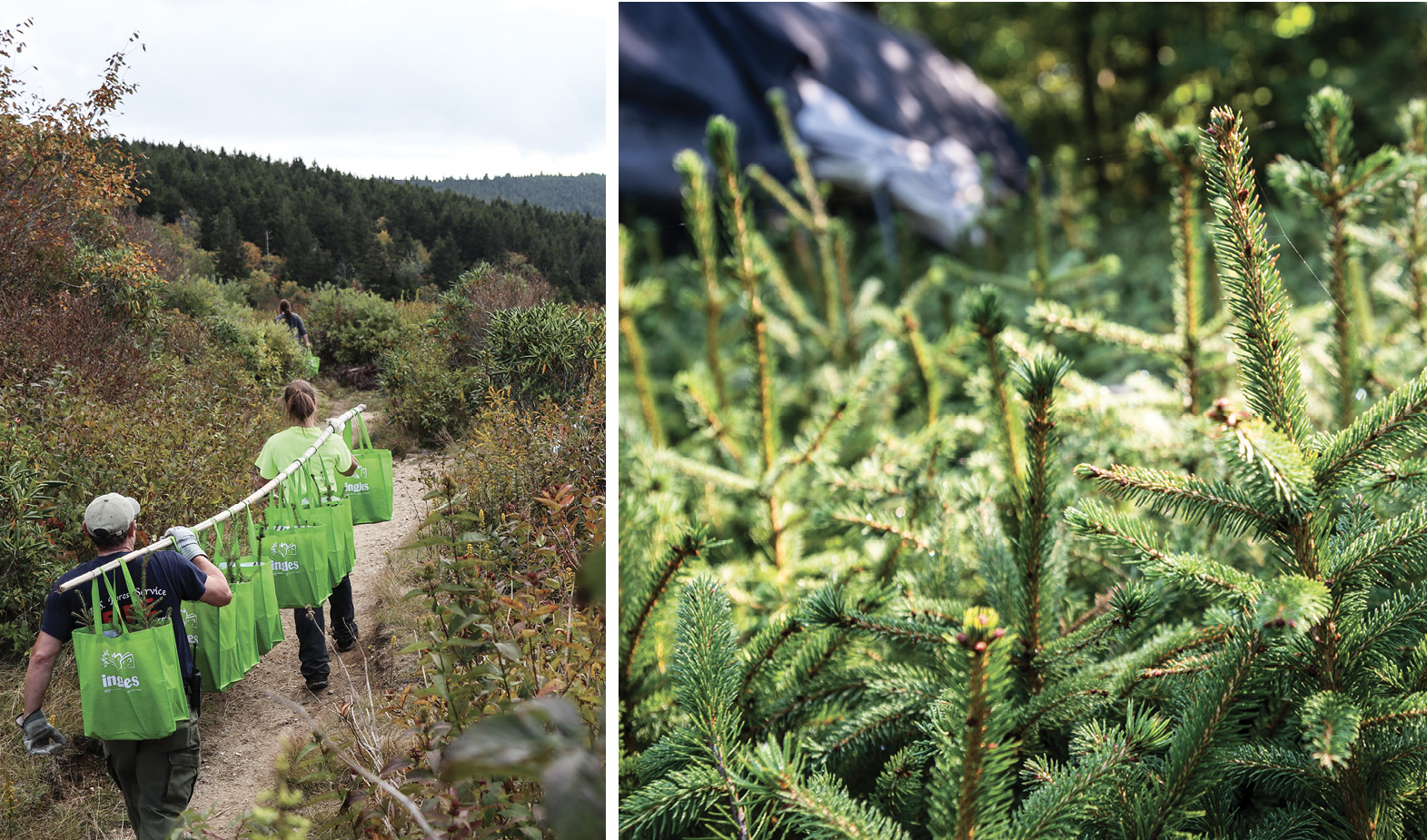 “We could go out and plant firs now, but in 10 years, only about 10 percent would be left,” says Chance. Focusing on the red spruce has proved to be a winning strategy. Since the project started, the red spruce is now the “least in decline” of the endangered Southern Appalachian evergreens, says Holdbrooks.

In addition to the flying squirrel, the reserve sees monarch butterflies on their annual migration and contributes data on them to a national organization. The pollinator garden tracks the presence of these endangered insects.

SHR is open to the public on visitor days during the spring and early fall, but groups such as garden clubs can reserve private tours, all of which are around two to two-and-a-half hours in length. There’s an annual public plant sale and a spring symposium featuring some of the biggest names in landscape design, including (last year) Thomas Wolz, widely recognized for incorporating the human as well as biological history of an area into his designs. The reserve’s staff works with local schools, making outreach education visits every month, and groups of students visit regularly as well. 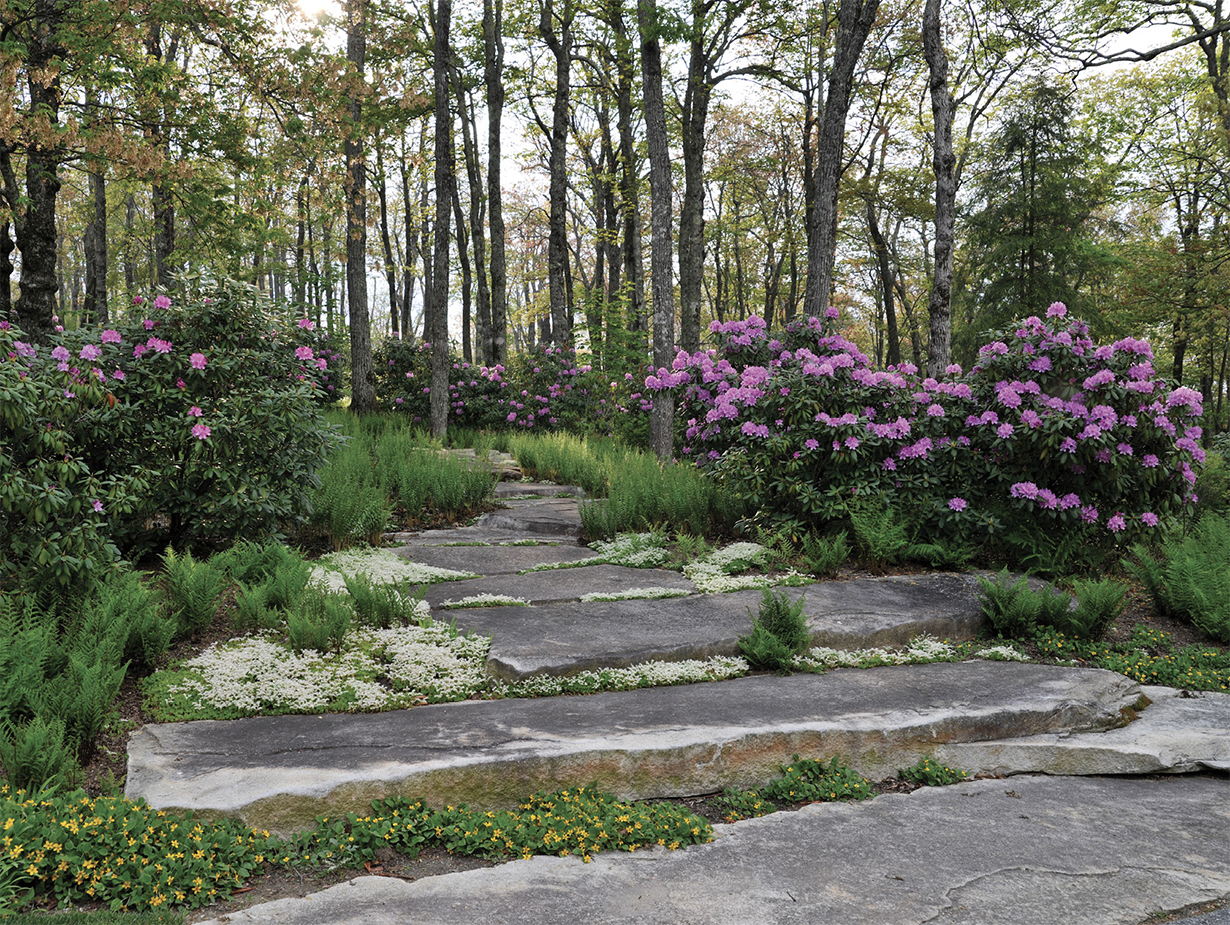 Come On In The main foot entrance to the SHR, which holds periodic visitors’ days for a nominal fee that support the nonprofit’s ever-expanding work

Although the Balentines live in Atlanta, they come up frequently on the weekends and always have their hands in the soil when they visit. This place is the couple’s legacy, says Holdbrooks, one they’ll continue to nurture until the next stewards of the land come along. Even as resort developments continue to expand in this area, this patch of garden and forest at the top of the world is a place where Western North Carolina’s native plants and animals will always find sanctuary.