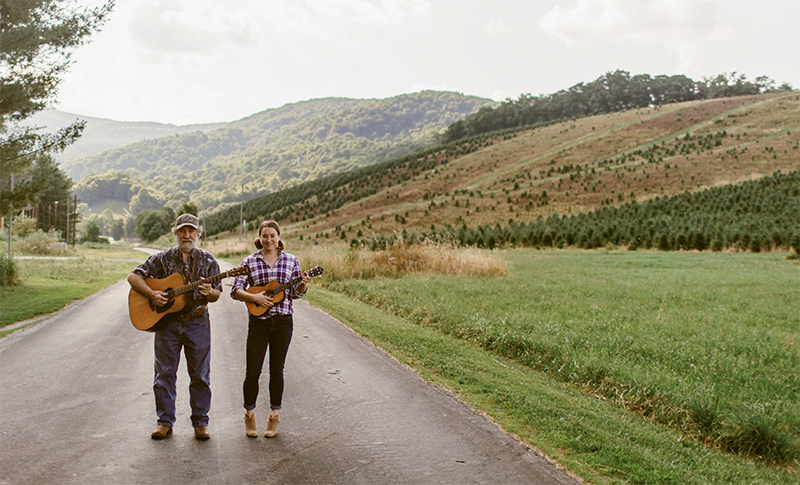 Wayne and Jayne Henderson outside his home in Mouth of Wilson, Virginia

It’s the day after the annual Wayne Henderson Festival in Virginia’s Grayson Highlands State Park, and outside the home of the eponymous artist, there’s still a kind of afterglow in the air. A tour bus is parked in the driveway, and several people have set up camp chairs around the yard, strumming familiar bluegrass tunes. Some wander in and out of Henderson’s guitar shop, where the world-famous luthier and fingerstyle guitarist is picking with a few friends. Around 2,000 people attended the festival, some traveling thousands of miles to this rural community that’s 45 minutes from the nearest interstate.

Wayne, 71, casts a long shadow in the guitar world. But his daughter, Jayne, is stepping out from under it with her own acclaimed custom guitar business. It’s an outcome that neither could have predicted years ago. But now that their life’s work is in harmony, this father and daughter are hitting the high notes together. 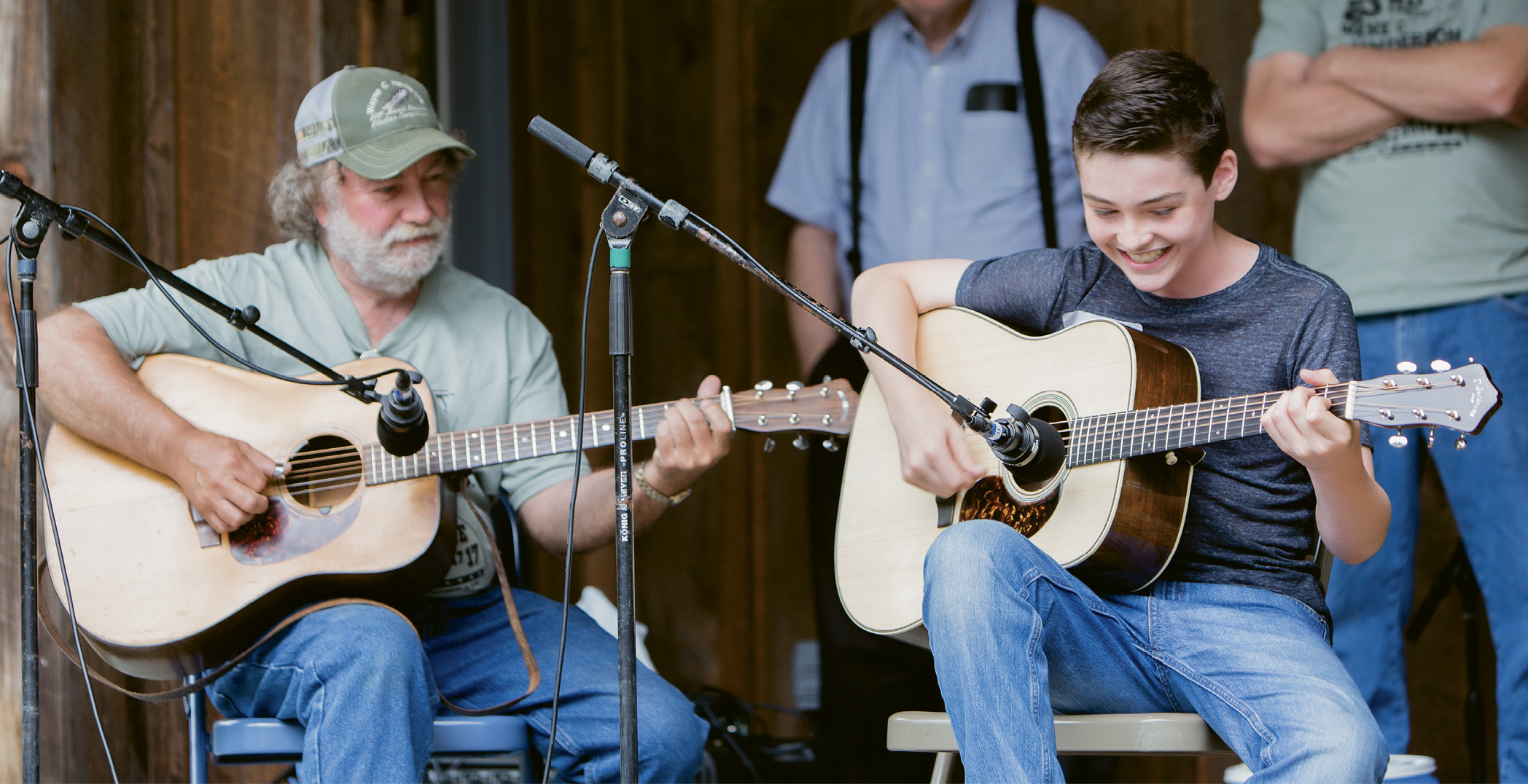 Wayne grew up not far from where he currently lives in tiny Mouth of Wilson, Virginia, just a skip over the North Carolina border near Sparta. In his younger years, it was a tobacco farming community—a place where nearly everyone played music and knew the same old-time, bluegrass, and gospel songs, though everyone brought their own style. It was only natural that young Wayne would give it a try. “If you have a cousin or two who can play something,” he says, “it’ll drive you nuts if you can’t do it, too.” As a child, he took every opportunity to learn informally from family and community elders.

He made his first guitar from a cardboard box when he was around seven or eight. Using whatever tools he could find on the farm, he continued to make more through the years. “I was good at figuring out how something was done by looking at it,” he says. A strong influence on his musical development, local musician E.C. Ball had a 1949 Martin D-28 (considered a benchmark acoustic guitar), and he’d let Wayne play it sometimes down at the local general store if he was really careful with it. Today, the guitars Wayne makes are often compared to those rare early Martins.

Wayne developed his own fingerpicking style and started to get noticed, winning contests around the region. After finishing school, he worked as a rural mail carrier. But he didn’t stop playing or making guitars. “It’s like breathing for him,” says Jayne. He’ll often be in his workshop until three or four in the morning. 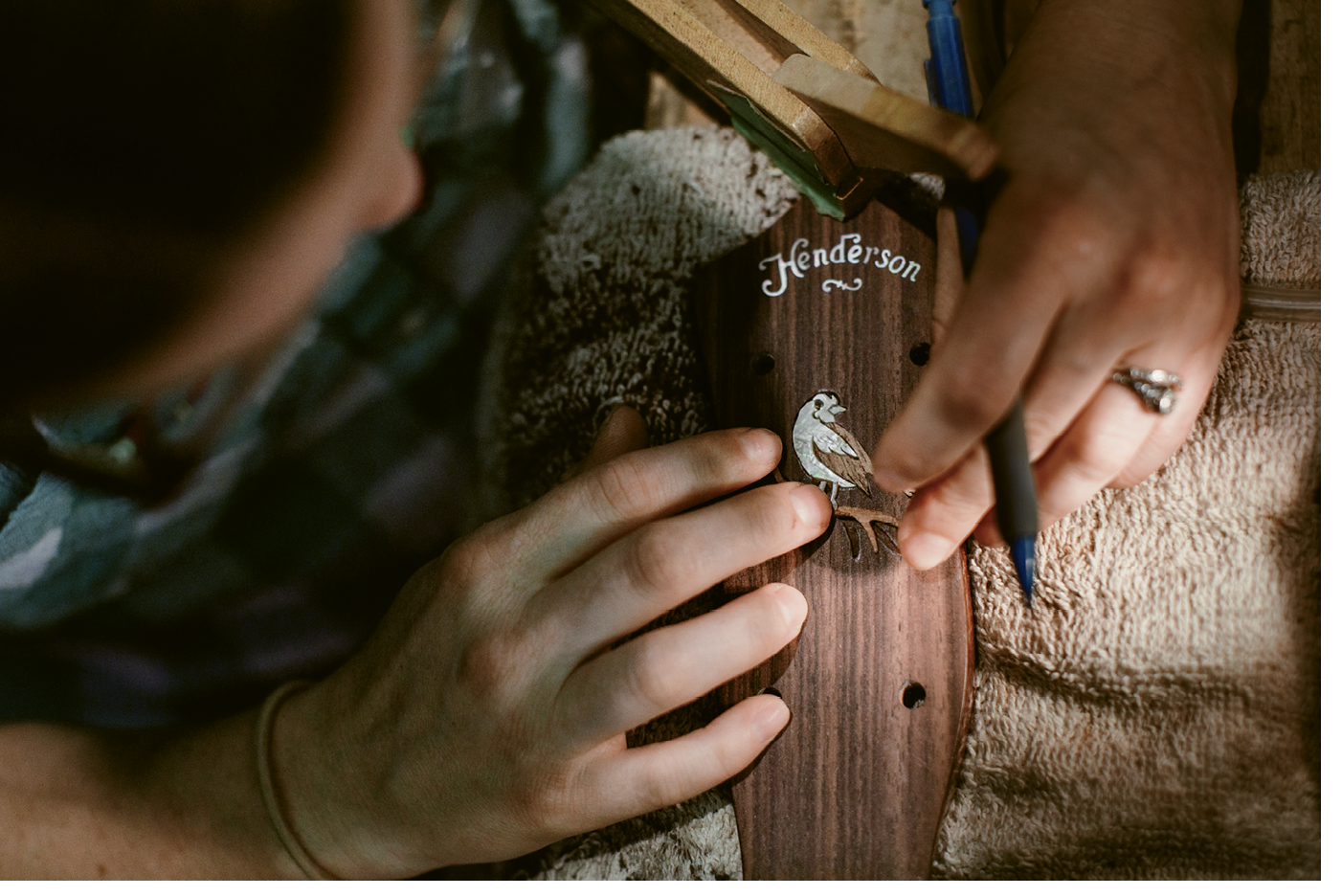 Wayne’s humble and soft-spoken demeanor belies his legendary reputation as a musician. He toured the world as a featured performer with Masters of Steel String Guitar, performing at such places as Carnegie Hall and the White House. Among his guitar-playing colleagues, word got out that, in addition to his musicianship, he was an excellent instrument-maker. He started to get requests from the likes of Tommy Emmanuel, Peter Rowan, Gillian Welch, and his long-time friend Doc Watson. Because of his meticulous attention to detail (each instrument takes about two months to make), he’s always got a waiting list. “I’ve been behind on orders for over 40 years,” he says. Even one of world’s greatest guitar players, Eric Clapton, had to wait 10 years for his, and that led to Allen St. John’s 2006 book Clapton’s Guitar: Watching Wayne Henderson Build the Perfect Instrument. After that, Wayne’s fame spread beyond “guitar freaks” to a wider audience, he says.

In 1995, Wayne received the National Heritage Award, a lifetime honor from the National Endowment for the Arts recognizing an artist’s outstanding contributions to his or her given field. No more than 15 artists receive the honor in any given year. Also in 1995, the first Wayne Henderson Festival was held in Grayson Highlands State Park, bringing together professional and aspiring musicians for performances and competition. In recent years, Wayne donates an instrument he’s made for charity, and proceeds from the event have provided over $230,000 in music education scholarships for local students.

As a child, Jayne sporadically took music lessons. She had a guitar her father made from Brazilian rosewood salvaged from the bar on Truman Capote’s yacht. (Friends often just offer her father things like that, she says.) A high achiever in academics and swimming, she says she was just so-so at playing guitar, although her father disagrees. Maybe it’s the characteristic Henderson modesty, but feeling that she’d never be as talented as her parents, she didn’t pursue music seriously. She considered a career in medicine, similar to that of many members of her mother’s side of the family, but ultimately decided to study environmental law at Vermont Law School. That experience, though, left her tens of thousands of dollars in debt, close to the amount commanded by one of her father’s guitars. Looking for a way to pay off her debt as quickly as possible, she approached Wayne about making a guitar that she could sell. He proposed an alternative: he would teach her to make one herself. Bit by bit, as she constructed one guitar, and then the next, she realized she had found a new path. “I would get so excited imagining what it could be. I’d go to bed thinking about what I was working on and couldn’t wait to get up in the morning and get back to work,” she says. 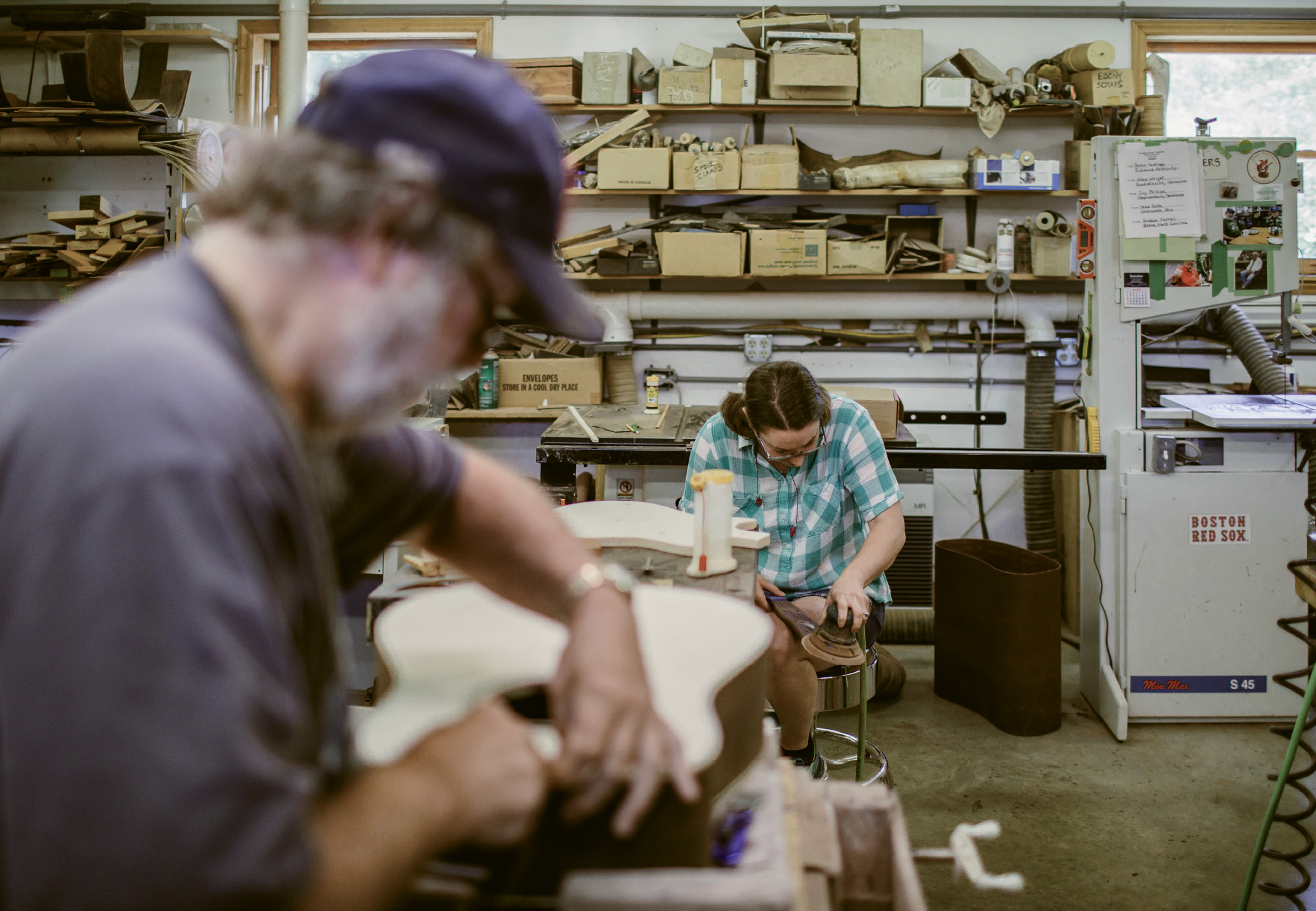 While Jayne has her own workshop in Asheville, she often visits and works alongside her dad in his shop, helping him complete orders.

Jayne left her job at an environmental nonprofit to make guitars full time in 2011. She now splits her time between the shop in her Asheville home and the one at her father’s house. At first, she says, she was concerned that customers would commission her only if they wanted one of her father’s guitars but didn’t want to wait. “I’m getting past that now,” she says. “I have my own niche.”

That niche is characterized by smaller-bodied guitars, an emphasis on sustainable materials, and trying some things that are new and different. She leans toward the creative side of the work and is known for her intricate decorative inlay designs, personalized for the guitar’s future owner. To do that, she makes an effort to get to know all her clients. “I develop a friendship with the person,” she says. “I choose the wood with the person in mind. I want to make something I think they’d be excited to play.” She has now made 109 instruments, and her waiting list is on the way to rivaling her father’s. “Guitars are kind of like kids,” she adds. “Each one is different. I love hearing it make its first sound. It’s great to see the way it brings joy to the person who plays it.”

So, what’s the secret to the sought-after sound of a Henderson guitar? It turns out there are no shortcuts, and ultimately, there’s no substitute for experience. Both Hendersons agree that the way the braces (wooden supports inside the guitar) are shaved and shaped makes a big difference in a guitar’s sound. The resonance in a guitar comes from the top, so the stiffer the top, the greater the vibration will be. By the same token, it also has to be flexible. Tapping on the wood and listening to it can tell you a lot about the sound a guitar will produce. “You listen to the wood and shape it the way it needs to be shaped,” says Wayne. “It needs to be light enough but strong enough that the whole thing doesn’t fall apart.”

“You can’t hear the guitar yet, but you can feel air coming out,” Jayne says, adding that she started using a tuner to judge the sound while she’s in the process of making a guitar. To some degree, these are skills that are developed through experience. But to a certain extent, this ear for sound can only be attributed to natural ability, something both Hendersons are clearly blessed with.

Father and daughter also share an unwavering commitment to working on an instrument until it is the best it can be, no matter how long it takes. “You can work on something all day and then have to redo it,” she says. “It’s not easy.” But there’s no question about redoing it; it has to be the best it can be. “It’s not just a block of wood,” says Jayne. “We put so much of ourselves into it. It’s a being. It’s a living thing.” That’s why, she says, her father describes their instruments as having a soul.

“I’ve always said I’d love to make as many instruments as Stradivari,” says Wayne, referencing the famed Italian violin-maker who made 1,100 instruments before dying in his nineties. So far, Wayne has made 745 guitars, 141 mandolins, 20 ukuleles, 20 banjos, four dulcimers, and four fiddles. “So I’m close,” he says.

And he has no intention of quitting. “He can’t not do it,” Jayne adds, “so it’s not like work.”

Growing up, Jayne says her father’s fame and his open-hearted nature meant that there were always a lot of people around him: friends, acquaintances, and those who wanted to spin in his orbit. Since her parents had split up and she lived most of the time with her mother in Roanoke, it was hard to get the one-on-one time with her dad that she craved. Now, working side by side in the workshop, “I’m meeting him in his element,” she says. "But it turns out it’s mine, too.”

For more on Wayne Henderson and his namesake festival, happening June 15, 2019, visit waynehenderson.org. Find info on Jayne Henderson’s guitars and ukuleles at ejhendersonguitars.com.