One-stop Bar Hop: A new tour brings the craft cocktail experience to you 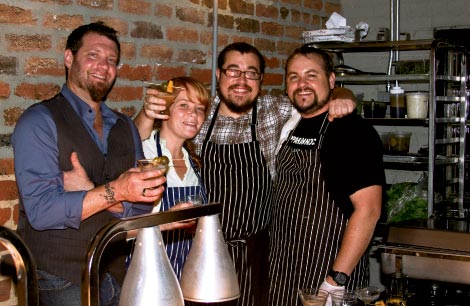 As Asheville’s culinary scene booms, it’s no surprise that a smorgasbord of food and beer tours have cropped up. In one evening, visitors and locals can head out to sample the best restaurants, bars, and breweries the city has to offer. But a new tour catering to the craft cocktail trend lets folks savor the most original  drinks in Asheville from the comfort of one bar stool.

Josh Bailey and Stephen Steidle, who launched Eating Asheville walking food and brewery tours earlier this year, have cultivated the Craft Cocktail Experience. And that’s exactly what it is, a complete experience that highlights some of Asheville’s most talented mixologists in one location with live music, hors d’oeuvres, and original drinks.

But don’t expect to see the same faces behind the bar at the next event slated for mid December at MG Road. “We want to mix it up and make it unique each time,” Bailey says. Just like each inventive cocktail.