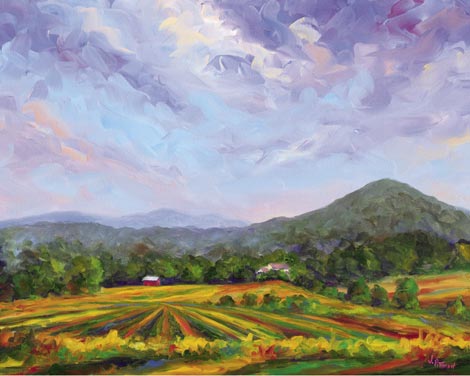 Since I’ve only lived in North Carolina since 1975, I have to admit I’m a transplant—one of “those damn Florida people.”

But even a transplant can put down deep roots and take nourishment from an adopted home.


Appalachian poet and essayist Thomas Rain Crowe coined the term “the new natives” for those incomers who “strive to work reciprocally and in balance and in harmony with the native people and the land.”


That’s my family: new natives. We may be from away, but at least we saw the error of our ways and moved to the mountains,  where we learned to raise tobacco, plow with mules, milk cows, and butcher pigs. We got to know our true native neighbors and their ways by working with them.
Theirs was a wisdom that couldn’t be found in books. They were attuned to the land, the weather, the seasons, and the phases of the moon in a way that seemed almost uncanny to someone who’d grown up where central heating and air conditioning made weather almost irrelevant and the moon was only occasionally glimpsed through a web of power lines and television antennas.


Like the songcatchers who once roamed these mountains writing down the old ballads, I listened and remembered. And when the day came that I began to write a novel, there was all this wonderful material just begging to be used—characters who became Miss Birdie and Aunt Omie, the landscape and life of the mountain farms and forests, the history of the region, and the language—oh, the language like poetry. “I was weedeatin’ in that ditch there and one a them big gorf rats like to run up my britchie-leg,” said Mearl, my neighbor across the hard road.


I tell people that my books are a love song to Madison County and a world that is fast slipping away. We were fortunate to have moved to our farm at a time when many people were still living as they had in the early years of the century, without television, Internet, or cell phones. Instead, conversation, storytelling, and homemade music on the front porch were the entertainment. These people are the heart of my stories.
But I have to write about the changes, too.


These mountains I love are seeing an influx of various pilgrims—Florida people looking for cooler summers, Northerners looking for warmer winters, earnest organic farmers, telecommuters with jobs in far-off cities, artists and artisans, New Age seekers, Latin American laborers—all adding spice and savor to what was once a dish with only one ingredient.


I was talking with a lifelong resident of the area and the subject of her neighbor—another of those Florida people—came up. “Him?” she sniffed, “He ain’t showed me nothin’ yet.”


By their works ye shall know them, I believe she was saying. True natives and new natives alike watch each newcomer, waiting to be shown their worth. And the fact is that many of these new people are enriching the mountains, bringing energy and freshness to the ongoing work. The best of them listen to the longtime residents, respecting their wisdom and experience, always trying to make sure that what we love about this land isn’t lost forever.


You never know when or where you’ll experience that transfiguring moment—that step across the divide between outsider and new native. It can sneak up on you, or it can come like a clap of thunder.


When I was new to the mountains, I went with a neighbor to a Decoration Day gathering at her family cemetery. A group was gathered atop the gentle hill under one of those crystalline blue skies that they say proves God is a Carolina fan. The invited preacher hadn’t appeared, so some took turns reading from the Bible or speaking a few words. And then Sylvie, another neighbor—a short, stout woman known for her ability to outperform a man in cutting and barning tobacco—began to sing “Amazing Grace.”


Her voice was rough, with a heavy mountain twang, and she sang from her heart and her belly and her soul with the same strength she brought to the tobacco field. Her song was a shout, a statement of faith, a declaration of who she was and where she was, and an anthem for all who once were lost but now are found. It raised goose bumps on my arms, and when the last fierce notes fell away, losing themselves in the trees and pastures around us, I was fighting back tears.


Amazing grace—it’s here all around us in these mountains.

Vicki Lane is the author of The Day of Small Things and the Elizabeth Goodweather Appalachian mysteries, which will include Under the Skin (Bantam Dell) due out in October. www.vickilanemysteries.com.