Natural Charm: From pageant queens to the namesake blooms, the 65-year-old Rhododendron Festival continues to celebrate the beauty of the mountains 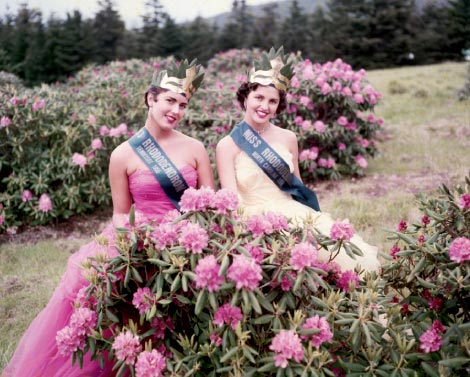 Straddling the Tennessee line in Bakersville’s backyard, Roan Mountain rises an incredible 6,285 feet into the clouds, and is the highest peak in the Unaka Mountain range. When botanist Dr. Asa Gray explored the area in the 1840s, he called it “without doubt, the most beautiful mountain east of the Rockies.”

Roan’s high country is the native home of the Rhododendron catawbiense, also known as the Catawba Rosebay, Mountain Rosebay, or Purple Laurel. These plants display spectacular blooms in June and July and range in color from deep purple to pale pink to white.

Bakersville resident Bob Hensley knows their beauty well. Not only does he lead botanical tours atop the mountain, he’s one of the dedicated volunteers behind the annual North Carolina Rhododendron Festival and its beauty pageant. This year marks the festival’s 65th anniversary, making it one of the longest running events in the High Country.

“We’ve come a long way since the festival started in 1947,” says Hensley, who serves as business manager for the event and pageant. “It began when the two communities, Roan Mountain, Tennessee, and Bakersville, came together to look for a way to boost the economy through tourism. We had something wonderful to offer—the rhododendrons at the top of the mountain.”

The first step was to build a better route to the pinnacle. The one rugged road out of Roan Valley “wasn’t much more than a glorified pig path,” explains Hensley.

Once the road was in place, the festival came together as a small event. “People gathered at the mountain, had a buffet dinner on the ground, and there was some speechifying by politicians,” he says. “Young ladies walked out in their Sunday best or maybe their prom dresses, and the queen received a crown of rhododendron leaves.”

The festival and pageant might have remained an obscure local event had it not been for the involvement of O.D. Calhoun, who owned movie theaters across North Carolina, including The Carolina Theater in Spruce Pine. To promote the festival, he worked with the Bakersville Lions Club, and called on his substantial contacts, including Walt Disney, who he’s said to have met at a film screening. Hugh Morton, who was beginning to develop Grandfather Mountain at the time, was also key in promoting the event.

By the late 1950s, the festival was nationally known and the Rhododendron Queen pageant was second only to the Miss America contest in prizes and prestige.

“The winner traveled all over the world,” says Hensley. “Not only coast to coast, but to Australia, Hawaii, even to England, where she was presented at court. From 1964 to 1969, the queen might travel in excess of 100,000 miles a year.” Calhoun’s friendship with Disney secured the queens a spot on a float in the Rose Parade until the late 1960s.

With popularity came challenges, and the mountain’s delicate plants were threatened when a visit by Vice President Richard Nixon and his wife, Pat, boosted attendance.

“In 1958, the festival had the largest crowd ever when Nixon made an appearance. Some 5,000 people came,” says Hensley, “which was great for the festival, but had an impact on the mountain. Before, the festival had attracted only about 1,000 people, but even that number is too many for the sensitive nature of the gardens.”

Although the celebration originated on the peak, a snowstorm during the June 1972 event forced organizers to reconsider the location. The contestants were freezing as they stood outside in their pretty dresses. And so it was decided to move the event to Bakersville, where it’s held today.

The festival has continued to evolve over the years. Today, two queens are named, a Junior Queen who receives a $1,000 scholarship and Senior Queen, who wins a $5,000 scholarship. Numerous other events broaden the festival’s scope, including a 10K run, a street dance, golf tournament, car show, and a fair exhibiting art, mountain crafts, and an array of local foods. This year’s festival takes place June 17 and 18.

As in the beginning, everyone involved with the festival contributes on a volunteer basis. Hensley, who has been business manager since 1998, loves the work. “For me, it’s a hobby of passion. We all love welcoming folks from all over the country who come to enjoy our corner of the mountains, have fun at the festival and, as always, take pleasure in Roan Mountain’s gorgeous rhododendrons.”