Native Daughter: There are endless reasons we all fall for the mountains, but one enchants us above all others: This place feels like home in our hearts. Here, five writers share how their deep connections to these hills were forged with Sunday drives, old-time music, wildflower hikes, and through the discovery of inspiration and strength. 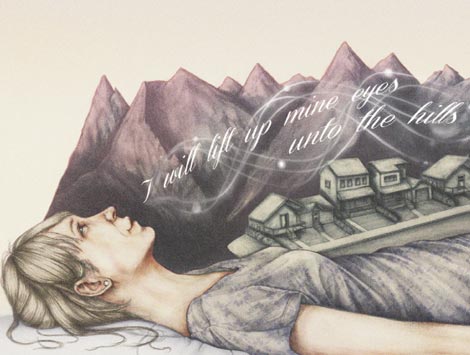 When I was growing up here, place trumped people. By that, I mean I had a community of people but we weren’t united by each other, we were united by the mountains. My first question to any stranger is, “Where are you from?” Sometimes it’s met with stares. The individual inevitably has to stop and ponder. “Do you mean where I lived before I moved to Asheville?” they ask. No, I say. “Where are you from?” stressing the word from, hoping this will clarify the question. I mean, of course, where are your roots? Where is that place that you always return to in your mind? Where is home?

It wasn’t until I read Cross Creek by Marjorie Kinnan Rawlings that I came to understand some people don’t grow up in their home. Some people grow up in the big city while yearning for the swamps, and some grow up in the swamps yearning for the big city. I guess that can get all kinds of confusing. I’ve had my share of things to sort out, but the one thing I’ve never had to decipher is where I’m from. My home was clearly defined for me four generations back. My people are mountain people. I am a mountain girl. I belong to these mountains as much as the laurel thickets or lady’s slippers. And for that, I am grateful. Realizing where one belongs is no small accomplishment.

Each time I leave and return to Asheville, this point is emphasized for me. The moment my eyes see the mountains rising in the distance, I breathe a sigh knowing I’m almost home. My heart skips a beat the same as if I were seeing an old lover after years of absence. I generally call one of my sisters to announce, “I can see mountains!” My youngest sister’s response is always the same. “Thank God. Stop and kiss the ground,” she says, and we both know what she means.

My father used to let four beach-tanned, stair-stepped, blonde-headed girls out of the car at the first sight of the mountains just so we could kneel and kiss the ground. We were only gone a week, and none of us would have missed a trip to Myrtle Beach to save our lives, but seeing the mountains was cause for stopping the car so everyone could feast their eyes on home—and yes, literally kiss the ground. Inevitably, a conversation would ensue about the benefits of living in the mountains versus the flatlands. Who would choose to live where the land stretched out flatter than a fritter with nothing to stop the eye? We’d shake our heads in sheer wonder and drive the rest of the way home, gratified to be ascending, in our wood-paneled station wagon, the mountains of home.

A wooden plaque hung by the kitchen door of my parent’s home, and it now hangs by mine. It’s the same plaque that adorns the walls of many mountain homes. It reads, “I will lift up mine eyes unto the hills, from whence cometh my help.” As an adult, I discovered the punctuation was wrong and that leaving out the next verse created a contextual problem. The original sentence ends with a question mark and continues, “My help cometh from the LORD, which made heaven and earth.” It refers to the  Psalmist looking off to the hills of Jerusalem, where the Lord dwelled, seeking his help. He isn’t finding his strength in the hills themselves, as I’d thought; he’s finding it by looking toward the place of the Lord. I called all my sisters and exclaimed, “That sentence has a question mark at the end of it, not a period!” They ran for their Bibles and we realized the newer translations include the question mark, and the King James does not. Their stunned silence came through the line. My oldest sister, the most pious of us all, said, “Well, that’s not how my plaque says it.” I’m not one to worship the created over the creator, but that settled it. We agreed the plaque stayed put, and the sentiment with it. The mountains of Western North Carolina are our Jerusalem.

You see, the mountains formed the walls of my childhood home. The valleys formed the floors. The ridges were my windows. Contentment was my companion. What else do I need? They have been my home for more than 50 years. The Lord formed me in my mother’s womb, and placed me in the bosom of the mountains. He knew strength would be needed for the journey. And so, I lift mine eyes unto the hills.

Cinthia Milner grew up in Haywood and Buncombe counties. She graduated from Furman University (still too far away from the mountains for her liking). She is the mother of two boys, a horticulturalist, and regular contributor to WNC magazine.