Music Men: Carrying sound and story is the only way to live for a musical storyteller, rock-and-roll rambler, and two gifted brothers who all call the foothills of Western North Carolina home 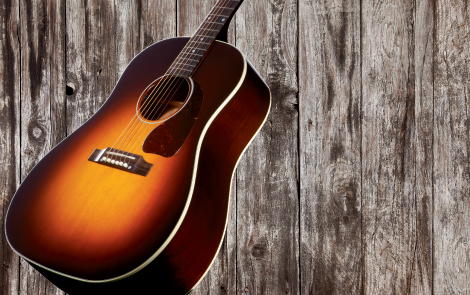 It’s found where the distance between saint and sinner is no further than the space between frets, where backsliders and Baptists sit together, right up on one another, listening to a mandolin that sounds like angels dancing on the rim of a Mason jar. It’s wound around the country lyrics of a story song, of folks leaving town on a ghost train or the wings of a dove. And, it lives in the wail of the bastard child called rock and roll, whose family tree branches into juke joints and smoke-filled bars, its roots prying up the floorboards of front porches and barn dances.

The music that lives in Western North Carolina, either by birth or divine guidance, is as good as it is varied. The sound comes from the instruments, but the music comes from the souls of the boys pulling the strings. It rolls down the mountains and through the hills and takes hold before the soil turns to sand, remaining on the solid ground it knows well. Let others shag on boardwalks. We pound boots on quartz and clay, nodding our heads in time and agreement. So it has been and so it shall be, forever and always. Amen.

On any given night, the notes and voices of a gifted bunch of musicians spill out on the sidewalks outside the bars and music halls that sit at the base of the mountains. Storysmith Michael Reno Harrell, guitar genius Jonathan Birchfield, and homegrown phenoms The Harris Brothers stay here because they know the invitation to “come pick some” is always open, which is as good a reason as any to be a musician in the foothills. 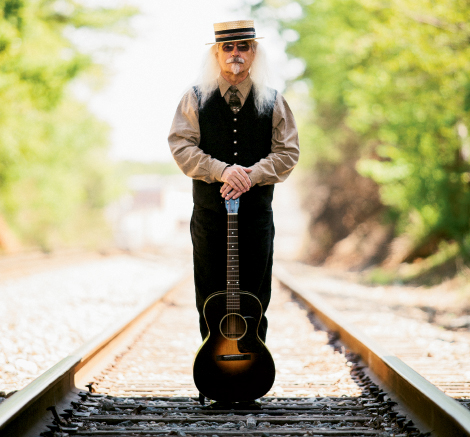 In a perfect world, every town would have a storyteller, a keeper of the trunk of memories reminding us who we are and where we came from in the time before big boxes uprooted mom-and-pop shops and television homogenized our language and took away our pretty talk—when things were, for better or worse, real.

Michael Reno Harrell is that keeper. And, if there were a perfect job, it would be to follow him around all day, every day, and listen to him tell his stories through song and speech. Everyone would fill out applications and hand over reference letters in hopes of being chosen, knowing the check stub would read “zero” because the pay would be priceless. Since no such job exists, folks buy tickets to his one-man plays, such as My Roots are Showing, and storytelling gigs. They hope to get invited to the house concerts his many fans throughout the South arrange in their backyards and barns and on porches.

While other musicians seek out gigs and hope the phone will ring, Michael is booked solid, thanks to his appeal and the dedication of his partner in all things, his wife, Joan. She’s instrumental in getting Michael and his audience in the same room, whether that room is in Carolina or Colorado.
Some think of him as a musician, others a singer, others a storyteller, but truly, Michael is a writer. “He paints pictures with words,” says fellow foothills musician, Jaret Carter. Michael’s writing process involves waiting for “something to spark.” He knows right away if it’s good, writing of army ribbons or seeing the world from a boxcar door or a letter sent to a granddaughter far from home.

Michael’s stories are so real to fans, he finally stopped admitting that there really wasn’t an aunt or cousin or granddaughter or any one of a dozen characters he brought to life with pen and strings, finding it kinder to just let them believe. The truth is, these personas do exist. We’ve all known the likes of them. That’s Michael’s gift, reminding us of the letters our grandpa wrote of town and the Texaco, of the time the neighbor boy went off to war and never came back, of radio shows and train whistles. And somehow, he makes us remember that it wasn’t all that long ago.

As he puts it, “I try to make the world my stories inhabit intersect with the audience’s world in places where they can see their backyards.” 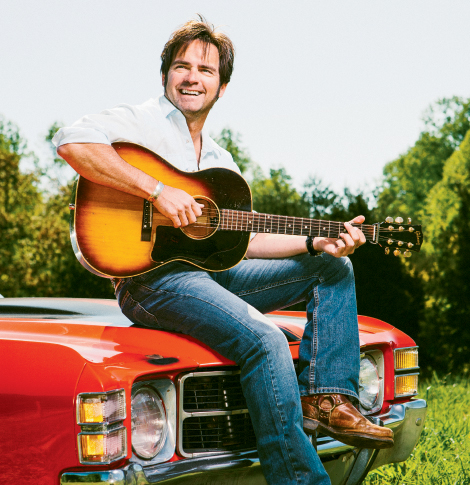 Jonathan Birchfield doesn’t have to listen hard to hear the highway call. His daddy made that easy for him when, in Jonathan’s early garage band days, he packed amps, guitars, and other teenage musicians into the back of a ’72 El Camino and toted them to play parties and prom nights in nearby towns. Today, Birchfield throws a change of socks, journal, laptop, and a book or two in a backpack, and writes songs in cemeteries and campgrounds on his way to play shows and festivals across the country. Twice he’s left behind and gone back for the 1959 Gibson he named Chess.

On his latest album, he writes of Carolina roads in “Dance With Me,” blue dresses in “Drive-In Nights,” and cheeseburgers all-the-way in a namesake ode to the beloved Claremont Cafe in Catawba County. He looks for, and finds, the inspiration that fed greats like Jackson Brown and James Taylor. And once a year, no matter how far the road has led him from home, he returns  for the chance to get back to the land and let his soul free for Sodstock.

A one-day music festival near Maiden, held on the 400-acre sod farm of Dave McCart, Sodstock is an idea born of beer and brilliance. McCart and Birchfield’s longtime friend, Tim Yount, printed the T-shirts, invited the bands, and welcomed 600 concertgoers through the gates at the inaugural event in 2010. Though it has grown, the festival is still for the love of music. “I start looking forward to the next Sodstock as soon as the last note has faded,” he says.

When he’s home, promoters and bar owners in Blowing Rock, Morganton, and Hickory call on Birchfield to take care of their crowds. Folks who come to drink, stay to listen because his music is a throwback to the days when pure rock and roll made us feel. His song list includes lyrics that are part and parcel of the songbook in our memories, of flatbed Fords and American girls.

He knows the classics as well as the songs he penned himself. If kicking off “Born to Run” makes diehard fans cringe with certainty that he won’t do it justice, it also brings them to their feet when he steps away from the microphone having convinced them he loved Wendy with all the madness in his soul. “I have to wear the songs I sing,” Birchfield says. “I need to be able to put them on and walk around in them.”

So, he wears sweet homes and blue skies and always there are the songs of southbound trains, the midnight hour, and headlights and wind and rain, while the house hangs on for his next word, his next note. “You’d give it all up,” sings Birchfield. “You’d cash it all in. Say goodbye to your peace of mind. Throw caution to the wind, and just enjoy the ride.” 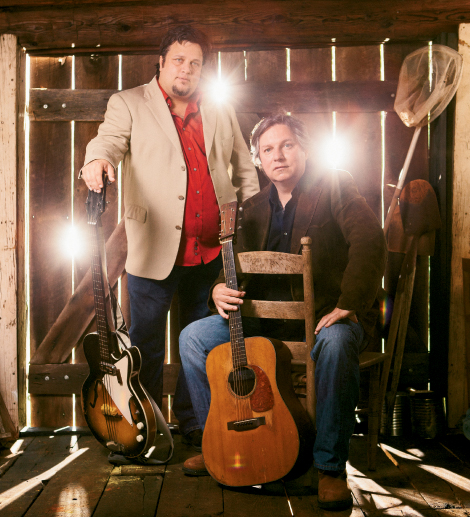 It’s the whisper heard between sets. “Why aren’t they in Nashville? Those boys are better than anything on the radio.” But a suitcase that always shares the stage with Reggie and Ryan Harris isn’t for traveling; it’s for the sound it makes when Reggie hits the kick pedal that smacks against the Samsonite. Sound, not fame, is what they’re chasing.

As a child, Reggie would open his daddy’s guitar case, lay his head down next to the instrument he was not allowed to lift, and draw his thumb across the strings to hear the tones. He supposes it started there, his search for a sound, a particular sound whether it’s tires flapping on asphalt for a highway song or the clucking in “Dixie Chicken.”

It’s a gift recognized by other pros, including guitar virtuoso Chris Clifton, who says Reggie has “the best right hand in the business,” appearing to fly over the strings. But it’s Reggie who takes flight. His own playing takes him to a world outside the confines of the stage. “When I used to play electric, sometimes I felt like I was hovering over the crowd, right above them. Can you believe that?” he asks. “But now, I look out and see Ryan’s little girl coloring in a book and I try to play what that would sound like, a little girl coloring.”

If Reggie’s playing is the quest, Ryan’s singing is the promised land, his voice so pure, so clear, so true. “I’ve heard Ryan sing a thousand times, but sometimes, like when he sings an old George Jones tune, it hits me just how crazy good he really is,” says longtime friend Jaret Carter.

Reggie and Ryan don’t want to be held to the purism of any one musical category, even resisting the tug of the bluegrass community to keep The Harris Brothers all to themselves. They feel connected to the old music, but are under no pressure to play it. They never use a song list, counting, instead, on the music to tell them what’s next. Ryan sings the blues as though he’s tore down level with the ground and convinces his audience that messin’ with his pride and joy will, indeed, make a man get mean. He can rock a gypsy soul in one song and be a lineman for the county in the next, or paint a starry, starry night.

There is no need to cross that mountain for Music Row, for everything they want is here—music, family, momma’s kitchen, and each other. It’s impossible to picture these sons of the foothills anywhere else.