Mushroom Makers: Pick up some peak season fungi this fall 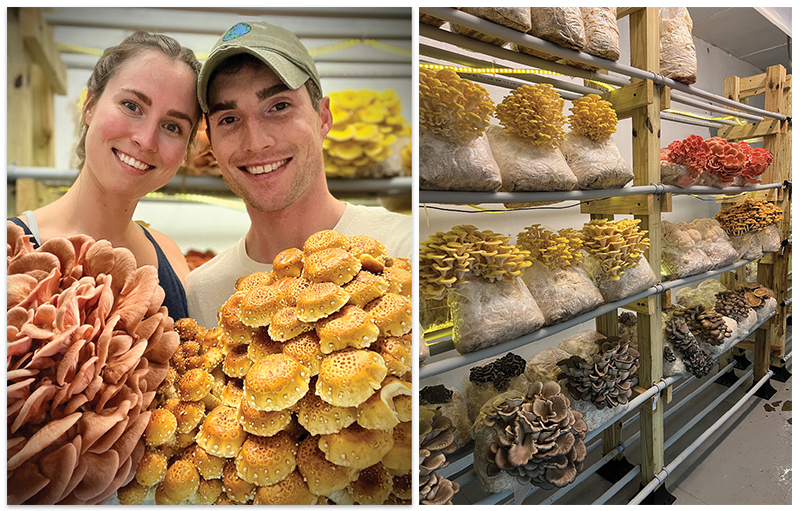 In the Grow Room - Miika Greenwood (left) and Avery Hughes (right) pose together with hand-raised mushrooms.

About a billion or so years ago, fungi and animals branched in separate directions on the tree of life. Despite the obvious gaps between the two today, a common ancestor passed on DNA that still links fungal life closer to us than plant life. To Avery Hughes, owner and operator of High Country Fungi, this is less of a mind-blowing fact and more of a “cool tidbit” about the infinite surprises of fungi.

“[When] I started learning about more mushrooms, it really just opened up a whole new world for me personally,” says Hughes, who has a storied history with fungi. In 2019, after years of connections made with fungi of all types and a spontaneous plane ticket to Oregon to learn from an expert, he converted a brewery in Avery County into a fungi warehouse.

That warehouse now sees three hundred pounds of mushrooms per week during peak season, which runs from August to October. Hughes runs the business with his partner, Miika Greenwood. Together, they’re the fungal caretakers, working eighteen hours a day, seven days a week.

High Country Fungi cultivates a number of gourmet and medicinal mushrooms each year. These aren’t the white button shrooms you’d find in Ingles (which Hughes is quick to point out are actually all the same type at different growth stages), but specialty varieties: Oyster, Lion’s Mane, Comb Tooth. They’re tricky to manage, but many hold a number of health benefits.

“I think the trickiness of growing it is really rewarding,” says Hughes. “I wanted a challenge, that provided the challenge, and I really noticed the benefits of it.”

High Country Fungi sells to seventeen accounts ranging from high-end restaurants to a taco truck, with a couple stores in the mix. Despite demand, they still set up a booth at the Watauga County Farmers Market each Saturday. There, folks can purchase fresh or freeze-dried mushrooms, medicinal extracts, or grow-kits for your countertop.

“Every Saturday we get to go hang out with our community no matter what, and that’s kept me going because we take this pandemic very seriously,” says Hughes, who sees the market as a world of comradery. “We think of ourselves as very welcoming, very intersectional, and mushrooms themselves speak to that concept.”

High Country Fungi - For more information, and to see more from the grow room, visit @highcountryfungi on Instagram.