Home /Murals, monuments, and a step toward reparations

Murals, monuments, and a step toward reparations

Murals, monuments, and a step toward reparations: Ashvegas presents the news from Buncombe’s boom town 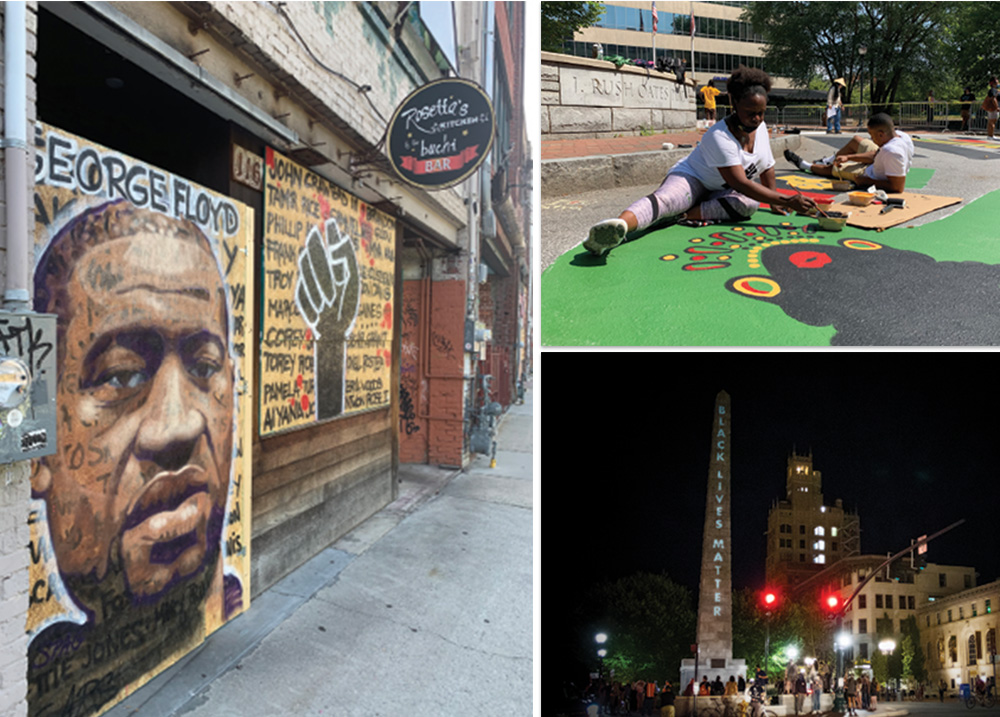 It’s been a summer of highly symbolic, and deeply significant, actions in Asheville around the issue of racial justice following the death of George Floyd of Minneapolis, who was killed while in police custody on May 25, sparking global protests.

Visual art took center stage in the wake of downtown demonstrations in June with a wave of spontaneous mural painting and projections. An organized street mural project followed in mid-July. The first wave of protest art appeared on the blank plywood that downtown business owners had used to board up their windows. Patton and North Lexington avenues became outdoor galleries as a host of artists painted portraits of Floyd and other victims of police violence.

Also in July, about two dozen artists organized by the Asheville Area Arts Council painted “Black Lives Matter” in large, colorful lettering on the streets surrounding the Vance Monument, an iconic marker honoring Zebulon Vance, the Civil War-era NC governor who was born in Buncombe County and remained a lifelong white supremacist. The project was led by three local Black artists: Jenny Pickens, Joseph Pearson, and Marie Cochran. Also in July, visual artists Liz Williams and Al Murray projected the words “Black Lives Matter” on the monument and images of Floyd on the facades of the Asheville Art Museum and Buncombe County Courthouse.

Following the city’s protests, Asheville City Council and the Buncombe County Board of Commissioners approved a joint resolution calling for the removal of two Confederate monuments and the creation of a committee to decide whether to remove or repurpose the Vance Monument. The two smaller markers were removed a few weeks later, and on July 10, a crew erected scaffolding around the 75-foot-tall granite Vance obelisk and covered it with a black tarp. It is to remain covered until the committee makes its recommendations some time this fall. 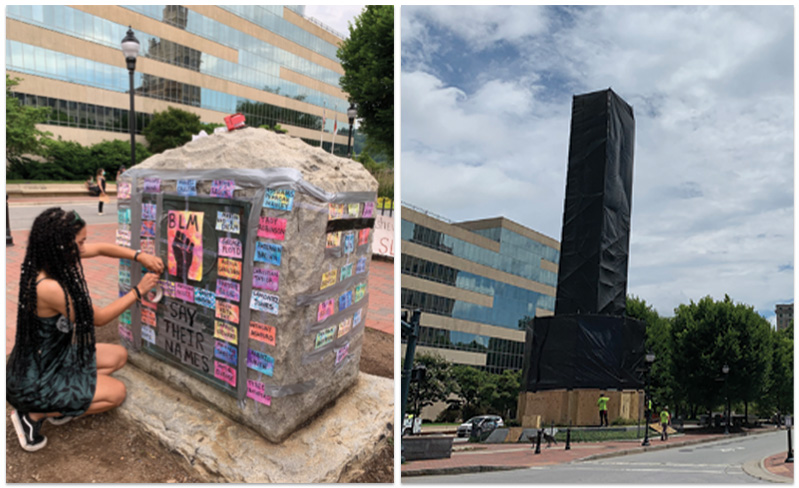 Asheville City Council took action again on July 14, this time voting unanimously to approve a resolution acknowledging the presence of systematic racism in the community and the country, apologizing to the city’s Black residents for the city’s role in slavery, and expressing support for reparations. It was an historic measure that made headlines with national news outlets.

“It’s simply not enough to remove statues,” Asheville City Councilman Keith Young, one of two Black council members, said during the meeting. “Black people in this country are dealing with issues that are systemic in nature,” and those issues must be addressed, he said.

The resolution does not call for direct payments to residents. Instead, its focus is to begin creating generational wealth and boost the economic mobility and opportunity of Black residents by addressing a host of issues, from affordable housing to racial disparities in health care.