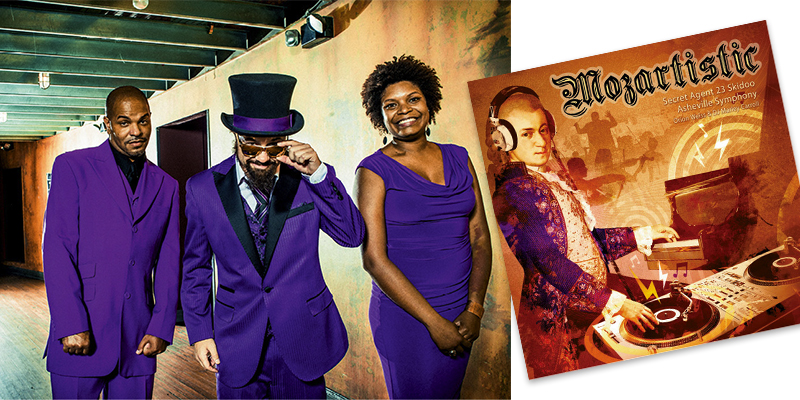 At its best, kid-hop is a family-friendly version of hip-hop, with lyrics full of universal appeal. A former Asheville resident who still records here, Secret Agent 23 Skidoo gets it: He’s been making up-tempo, positive kid-hop for a decade now. His fourth album, 2014’s The Perfect Quirk, earned a Best Children’s Album nomination at the Grammy Awards. This year, his album Infinity Plus One was the winner in that category.

With his latest release, Mozartistic, Skidoo may have created his most compelling work yet. An inspired mash-up of symphonic music, beats, and rapid-fire rhyming, the EP enlists the talents of the Asheville Symphony—under the direction of conductor Daniel Meyer—along with pianist Orion Weiss, turntablist Marley Carroll, a rocking rhythm section, and the production/engineering skills of Echo Mountain Recording’s Julian Dreyer.

The disc’s five tracks offer up variations on two numbers (the title cut and “Supersonic Symphonic”), plus a thrilling reading of “Turkish March” from Mozart’s Piano Sonata No. 11. That work is played straight, featuring Weiss and the symphony; and though it’s sandwiched between the kid-hop tracks, it fits in seamlessly and may stealthily introduce younger listeners to classical music.

Listen to the EP and purchase a copy at www.ashevillesymphony.org/mozartistic.