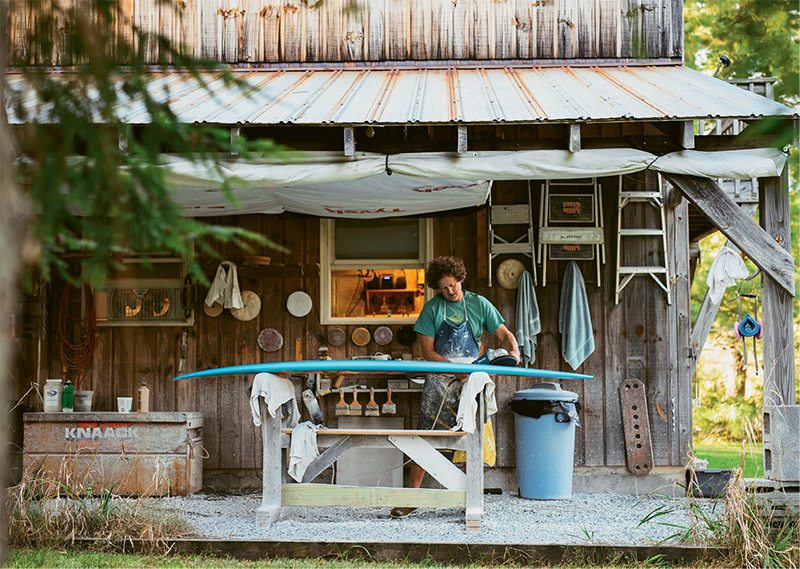 Made in WNC A resident of the High Country since 1988, Pressly builds surfboards from his studio next to his Valle Crucis home. Each takes about 30 hours to make, and he ships them nationwide. And any time the surf’s up, he heads to the coast.

With his pouf of curly hair, bright smile, easy vibe, and zeal for surfing, Bill Pressly could be a permanent fixture on any beach in Southern California, but he’s elected to run his surfboard business, Bill Boards, out of his Valle Crucis workshop in high-altitude Watauga County. He’s spent the past 15 years here making custom boards that he ships to clients across the country, and it all stems from a long-time passion for surfing.

Pressly discovered the sport in the early ’70s at 11 years old, watching a Hawaiian surf competition on TV. Though he was living in the suburbs outside of Washington, DC, at the time and was three hours from the beach, he turned to the yellow pages to find the nearest surf shop, in Bethesda, Maryland. “I begged my dad to take me,” he remembers. “They had two boards for sale. I put $30 down and spent the summer mowing lawns to raise the other $30.” 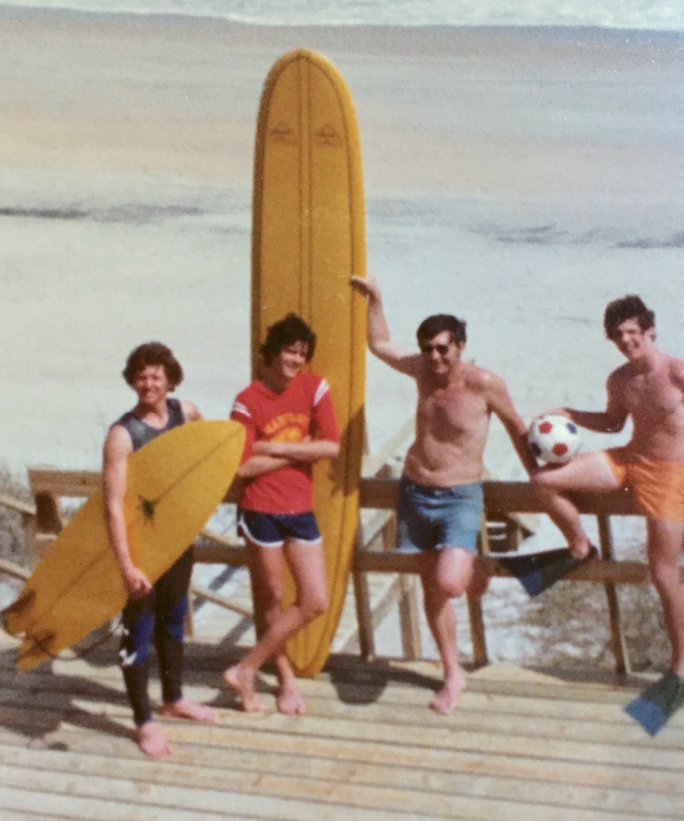 Totally Tubular Pressly (left), his father (with longboard), and two friends at the family’s Carolina beach house in the late 1970s

Though Pressly spent much of his childhood in Maryland, his summer vacations were often taken on the North Carolina coast. The blue-gray waters of the Atlantic were where he learned to ride waves. His early impassioned foray into the sport foreshadowed the surf-centric life he would ultimately lead, despite living several hours away from the ocean.

The mountains have always called to Pressly, a sports enthusiast whose family also lives in Valle Crucis. They settled in the area and opened Mast Farm Inn in 1985, while Pressly was in college, first at Mars Hill and then Virginia Tech for forestry. Though Pressly still makes regular trips to his family’s beach house on the Carolina coast to surf, he needs the isolation of the mountains to get any work done. It may seem ironic, but it’s the very absence of waves that allows him to create handcrafted boards. “If I’m at the beach, I’m just too focused on surfing to get any work done,” he says laughing. When at home, if he’s itching to ride a wave, he checks the weather and decides if it’s worth it to make a trip to the coast, which takes planning at least a day in advance.

Pressly also notes that Western North Carolina presents a great atmosphere for artisans. “The mountains are full of other craftsmen doing things like this,” he says. “What I make just happens to be used hundreds of miles away.”

Stepping into the workshop Pressly built next to his also handcrafted home offers a glimpse into every step of the process of surfboard-making, from initial shaping to pouring the final layer of colored resin, sanding, and polishing. Although Pressly now uses some equipment that makes it all more efficient, he didn’t take a single shortcut when he made his first successful surfboard. In fact, he didn’t even use the power tools standard in board production. “I did that one completely by hand,” he says. “I wanted to get the feel of the process and see how it worked.” He reshaped the body from a 1960s-era longboard he’d used for years until the nose broke.

Though Pressly laughs when he explains that he learned his craft by watching a VHS how-to video, he also admits this wasn’t his first time building sports gear. Through his high school shop class he’d learned to make skateboards, which he sold to friends. The process was similar in that it involved shaping and working in fiberglass. “I almost failed my shop class because that’s all I was making,” he says. In the late ’70s, Pressly even had a go at making a snowboard—another sport he enjoys. 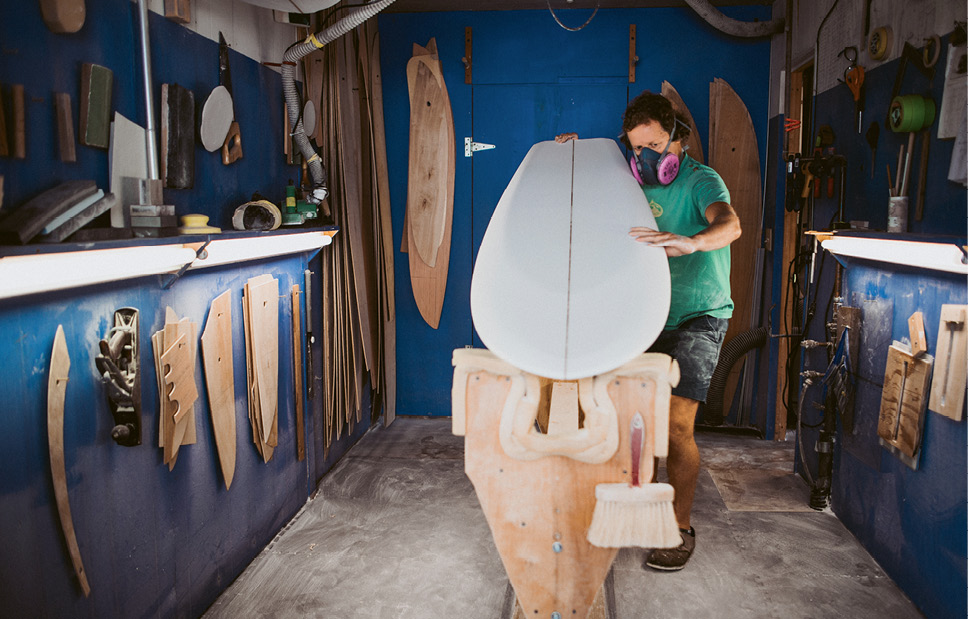 “There are mass-produced surfboards out there, but that’s not my market. The people who come to me are interested in something handmade.” —Bill Pressly

By the late ’80s, Pressly had a strong tie to Boone via family and friends and decided to permanently settle in the area. Also a mountain biker, he opened Boone Bike & Touring in the early ’90s, which he operated for about 13 years. Owning the shop in what was then a small, quiet town allowed him the opportunity to travel, occasionally for several months at a time, which he’d spend surfing or snowboarding out west. So when he decided to sell the shop, he took up his first passion. Pressly made an eight-month trip with no return date, surfing in Mexico, Costa Rica, California, and Vancouver Island. And when he arrived home in 2004, he set about making his first board. He made a few for himself and his friends. “They worked better than the snowboard,” he says, smiling.

Today, Pressly’s process is thoroughly streamlined, but his years of experience haven’t sped things up that much, which is fine with him. He spends around 30 hours on each board. “There are mass-produced surfboards out there,” he says, “but that’s not my market. The people who come to me are interested in something handmade.” Though he says there are other surfboard makers working in the mountains and inland in the Pacific Northwest, he’s the only one who he knows of this far inland on the East Coast.

When it comes to custom boards, Pressly always defers to what the client wants, but appreciates being given creative leeway with color and pattern. “I usually ask what colors they don’t want,” he says, “and it’s fine if people have really specific ideas, but the great ones are when I get to do more of what I want.” He gestures to one board awaiting delivery to its owner in Santa Cruz, California. One side is a deep turquoise blue, the other a kaleidoscope of colors, including coral pink, maroon, electric lime green, and a rich orange. “This guy told me to do whatever I wanted and make it cool,” he says, beaming. “It was the best.”

Business is booming, but living in Valle Crucis means that his community of surfers can feel distant. Friends are, however, just a phone call away. And because demand slows down in wintertime, Pressly hits the road to surf at all of his favorite spots, reconnecting with a community of surfers that span all ages and locations along the way. “It’s been a driving force in my own life for 40-something years,” Pressly says. “I don’t see it going away. I think I’ll surf till I die.”

To see more of Pressly’s work or inquire about a custom board, visit www.billboardssurfboards.blogspot.com.