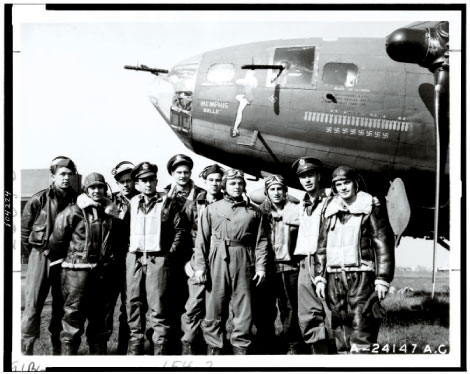 Flying just above the rooftops of downtown Asheville, a B-17 headed for the gap between city hall and the county courthouse. But the plane’s wingspan was too wide to squeeze through the divide. A crash looked imminent, however the pilot banked the bomber 60 degrees and passed one of the wings through the narrow space before pulling up and disappearing over Sunset Mountain. One onlooker exclaimed, “somebody ought to court-martial whoever is flying that plane!” It was 1943, and pilot Robert K. Morgan was on a 31-city publicity tour with the Memphis Belle, the plane that carried him safely through 25 missions in Europe during World War II.

The spectacle didn’t surprise anyone who knew Morgan as a wild child growing up in Asheville. Though his family was forced to give up their Biltmore Forest home after the Great Stock Market Crash of 1929, they were lucky. Cornelia Vanderbilt allowed the family to live in a cottage on the estate because of her close friendship with Morgan’s mother, Mabel. He grew up with his run of the grounds—hunting, fishing, and in his teens, entertaining friends, especially ladies, with picnics.

His mother nurtured his wanderlust by talking about traveling to Spain, England, Germany, and France one day. They never made those journeys together; years later, his mother took her life after being diagnosed with cancer. Instead, he saw Europe from the cockpit of the world-famous bomber.

Beating the Odds
“If you want in just one word how we were able to go through the hell of Europe twenty-five times and get back home without a casualty, I’ll give it to you,” Morgan said during one of his speeches to support the war effort. “The word is teamwork. Until you have been over there, you can’t know how essential that is. We had ten men working together, each ready and able to help out anybody else who might need him.”

The Memphis Belle was one of approximately 13,000 heavy bomber B-17 Flying Fortresses designed by Boeing aircraft company during World War II. The plane and her crew made history when, between November 1942 and May 1943, they were the first to complete the requisite 25 bombing missions from England into Nazi-held Europe.

In 1942, when the U.S. Eighth Air Force joined efforts with the British Royal Air Force, they had an almost impossible goal: to keep up unceasing, strategic bombing on enemy military and industrial sites. American bombers flew during the day; the RAF flew at night. Bombs dropped around the clock.

Daytime precision strikes were no easy mission. The German air force, or Luftwaffe, was a formidable foe and their facilities were protected by strong anti-aircraft installations. The B-17s had to run a murderous gauntlet of enemy flak and attacking fighter planes to reach targets and return safely. In the first three months, more than 80 percent of the Eighth Bombing Squadron planes were shot down. As Morgan explained in an article for Flight Journal in 2002, “That means you eat breakfast with 10 guys and dinner with two.”

To keep up morale, the command generals set an incentive for the individual bomber crews. After they completed 25 missions, that plane’s men would be rotated back to service in the States. The Belle crew was the first to hit that mark. They received a total of 60 decorations, including the Distinguished Flying Cross, Air Medal, and four Oak Leaf Clusters. “The Belle’s crew wasn’t better than any other B-17 crew,” Morgan recalled in an interview. “We were not heroes. We simply did our jobs, and were in the right place, at the right time.”

Morgan was modest. In the 20,000 combat miles flown by the Belle, she dropped more than 60 tons of bombs, shot down eight enemy fighters, likely destroyed five others, and damaged at least a dozen more. On five occasions she had engines shot out and once came back with her tail nearly gone. She hit German submarine pens, munitions factories, and military installations. Without the efforts of the Belle crew and other Allied bombers, D-day may have come much later.

Taking Flight
Flying wasn’t Morgan’s ambition as a boy, but when it looked like the country was headed for war, he enlisted in the Army Air Corps. He even fudged a bit on the eye test so he could make the cut for pilot training. At 24 years old, he took command of his B-17 and named her after Margaret Polk, his sweetheart in Tennessee.
Morgan was described as a “fast-driving, hard-drinking hell-raiser” in those days, a description that fit many pilots then. Yet while Morgan and his fellow airmen may have indulged during pub crawls while on leave in London, on missions they were all business—trained, steady, and coolly professional.

In his book on the bomber boys of World War II, Masters of the Air, historian Donald L. Miller describes how Morgan prepared his guys, writing, “he would call his crew together and have them huddle up like a football team. He would talk to his men quietly for a few minutes. What was said was unimportant. ‘The important thing,’ Morgan recalled, ‘was that this was our huddle, our moment to come together among ourselves. To hear one another’s breathing, feel one another’s hands on our shoulders. To experience that instant when we stopped being ten separate entities and became one.’ These wisecracking American boys who seemed to take nothing seriously would suddenly have ‘the solemnity and level gazes of men twice their age… It was ten minds coming into acute focus.’”
The B-17 was part bomber and part battleship, with machine gun turrets placed at its top, sides, nose, tail, and belly. The plane was 75-feet long and one gunner said it was like being inside a “lightweight aluminum cigar tube.” With a 100-feet wingspan, it looked roomy. Yet, most of the interior was taken up by the bay where bombs were stacked from floor to ceiling. Space for the crew members was claustrophobically tight. They were literally jammed into their stations.

Since the pilot and copilot were in a cockpit above the nose of the bomber, they couldn’t see below the plane or behind it. “If it weren’t for the tail gunner using the interphone to keep me posted on the formation behind,” Morgan said in 1944, “the top gunner reporting to me what he can see, the ball turret gunner telling me what he can see, it would be almost impossible for me to fly the airplane in combat. I can’t get up and look around. Those fellows are my eyes.”

The B-17s flew in formations of as many as 100 at a time, at an altitude of about 20,000 feet and sometimes traveling as far as 600 miles to reach targets. “The secret to the B-17 was the capability of flying in tight formations—so tight that the wings were often almost touching,” said Morgan. “We were able to put out an amazing amount of firepower.”

Back in Action
Though Morgan eventually parted ways with both his belles (Polk and the plane), his piloting role in World War II didn’t end. After the exhausting public relations tour, he requested to be put back in the fight. He was assigned as a B-29 Super Fortress squadron commander and his plane was named Dauntless Dotty after his Asheville bride, Dorothy Johnson, whom he married before being reassigned in the Pacific.

“After the Belle I trained in B-29s and flew 25 more missions over Japan from Saipan,” Morgan wrote in 2000. “The 29 couldn’t hold a candle to the 17. Engines overheated constantly—they were underpowered. So, if you lost an engine or two as I did, it was impossible to make it back to Saipan. When I lost those two engines over Tokyo, I was able to straggle into Iwo Jima and land. It saved our lives.”

Morgan returned to Asheville for good in April 1945, though he had difficulty settling into the quiet life and later remarried. He continued to fly for the rest of his life, making regular appearances at air shows and civic events, and stayed involved with the preservation of the Belle and other aircraft. Today, the plane is still undergoing restoration at the National Museum of the U.S. Air Force in Dayton, Ohio.

“There is something magical about the emotions Belle draws from people that has nothing to do with my crew or me,” Morgan wrote in Flight Journal in 2002. “The Belle simply makes people proud to be Americans and thankful to live in freedom.” When Colonel Morgan died in 2004 at age 88, he was given a hero’s send-off at his funeral with flyovers from a B-52, P-51 and, of course, a B-17.