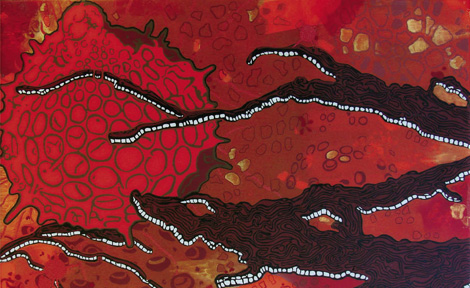 Sitting beneath a dozen or so wall-mounted spindles wound with various colors of adhesive vinyl in her shabby-chic River Arts District studio, Marie Knight describes her favorite virus, T4.

“What’s cool about it is that its structure and function are so intertwined,” she says, explaining how the virus is perfectly shaped to deliver its DNA into an unlucky bacteria cell. It’s a topic of conversation better suited to a science lab than an art studio, but so is the microscopic subject matter of many of her works.

Drawing from science textbook diagrams, art-deco patterns, and sign-making techniques, Knight creates graphic representations with adhesive vinyl and sign paint, specializing in the tiny life-forms that thrive below the surface of human perception. “A view into the realm of the microscopic is essential for appreciating the freaky beauty of nature,” says Knight.

A wastewater analyst at an aquatic toxicity lab by day, the Morganton native has an acute knowledge of just what goes on at the microscopic level. She holds degrees in molecular biology and biochemistry from Wesleyan University in Connecticut, though her art training is limited to a high school survey class and introductory drawing in college.

After moving to Asheville in 2005, Knight began experimenting with vinyl at her boyfriend’s sign shop, tailoring the methods of sign making to suit her artistic endeavors. Each work starts as a sketch, which she scans into a computer and converts into vector form. The vector drawing is fed as instructions to a computer-directed plotter, which etches the shapes into sheets of adhesive vinyl. Knight then arranges the vinyl cutouts on a smooth surface, such as aluminum or Plexiglas, and embellishes with paint.

Although her focus is not confined to microorganisms (other topics have included trilobites and Cyclopean women), many of the works come out looking like expanded, distorted versions of microscope slides. It may seem like an unlikely marriage, but Knight sees a broad overlap in the dual pursuits of science and art: “Both are ways of looking critically at the world, being observant, and noticing details, then recording accurately and making something out of it.”