Home /In the Magical Realm

In the Magical Realm

In the Magical Realm: In Chunns Cove, Douglas Ellington’s fairytale cottage continues to cast a spell 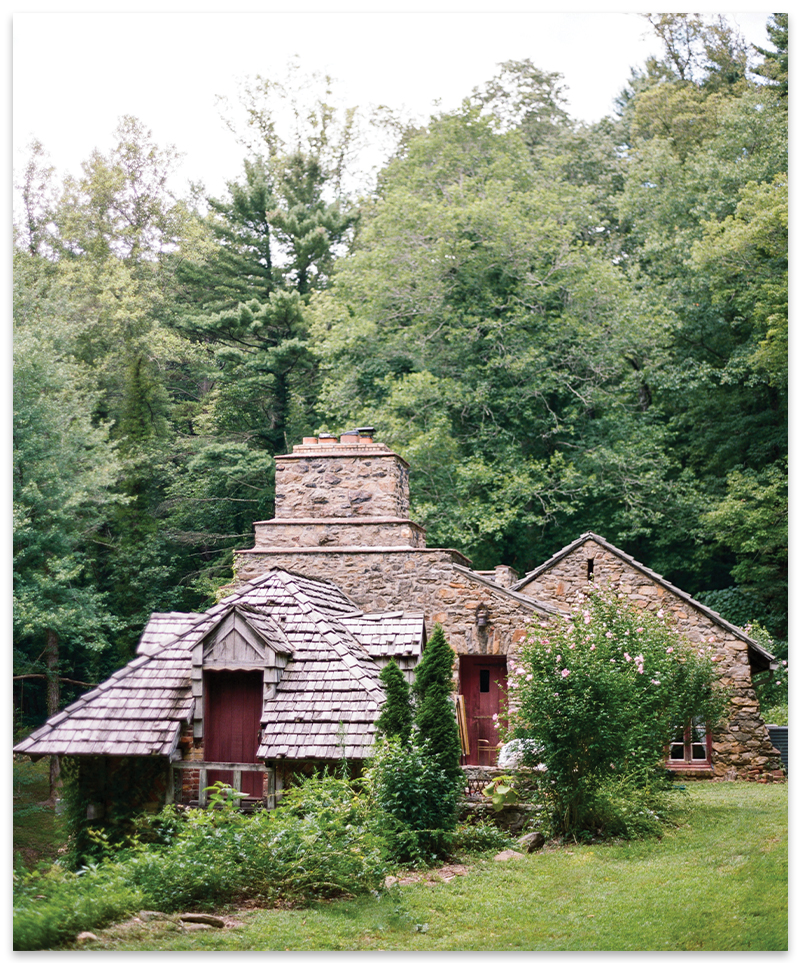 On summer nights when she was little, Sallie Middleton Parker would sit in the living room of her family’s summer retreat, looking out into the inky black night to see thousands of twinkling fireflies and the red glow of cigarettes held by the grown-ups around an outdoor fire. Laughter—there was always laughter—rang out through this secluded pocket of Chunns Cove as the sparkling conversation bounced between topics from art to politics to philosophy. At the center of it all were her grand-uncle and grandfather—always dashingly dressed; linen suits in the summer, tweed in the winter. These two towering twentieth century Asheville figures—architect Douglas Ellington and his brother and business manager Kenneth—held gatherings with the most interesting people in town at the house Douglas built without a blueprint. Then and now, something special surrounds this home that the family called The Cove. Part fairytale cottage, part arts-and-crafts dream, it’s almost universally described with a single word, “magical.”

Brick with field-stone chimneys, a central tower, hand-split wood shingles on the hip roof, casement windows painted in a Roycroft-red, and a rounded front door. When the ivy that climbs the walls is in season, the cottage looks like “it could be in the Shire,” says the home’s Strategic Partner Lauren Rusignola. Ellington designed Asheville’s most iconic building—City Hall—as well as First Baptist Church, Asheville High, and the S&W Cafeteria, among others; eminent edifices of scale and grandeur. But for the home that would stay in the family for generations, the footprint was modest, the aesthetic whimsical—a place where creativity could (and did) thrive; a place where the architecture seemed to conspire with nature. The babble of the creek, the breeze coming through the valley, and the melody of bird song in the air became part of the milieu.

The commission to design the First Baptist Church brought the Ellington brothers to Asheville in 1925, the height of the city’s boom years. They opened an office at 16 1/2 Wall Street, later moving across the street to the Flatiron Building. Within just a few years, Douglas was the city’s most sought-after architect, responsible for the iconic Art Deco designs that still define the city today. He was far from a novice. In 1911 he had been awarded the Paris Prize by the Beaux Arts Society of New York, allowing him to study at the Ecole des Beaux Arts in Paris where he became the first American to win the prestigious Prix de Rougevin for a “measured drawing.” He had taught at Columbia University and The Carnegie Institute in Pittsburgh. But it was here in Asheville that his vision hit an inflection point, finding support in a city that was chartering a course towards a prosperous future. He and Kenneth decided to plant roots here.

Kenneth found and purchased the Chunns Cove property, which included a two-room nineteenth century log cabin. Preserving the cabin and adding onto its right side, Douglas expressed a more imaginative side of his architectural and artistic ideals than seen in his civic and commercial projects. The central room was built to resemble the bow of a ship with hanging lanterns, a ship-rope bannister, and a hidden Neptune in the room’s ceiling. On the home’s exterior, a man’s face peeks out from the eves, like the figures found in medieval cathedrals. On the front door, a stained glass insert features two smiling gentlemen and a Shakespearean quote: “Welcome ever smiles, farewell goes out sighing.” All around the house, there are features made by local artists, many of whom had worked on Ellington’s projects: wrought-iron door hardware, chandeliers, and sconces. Ellington was a “roll up your sleeves” type of architect, says Middleton Parker, often joining his construction crews to ensure specific elements were executed according to his vision.

He was also, she says, “the original recycler.” In the living room floor, a band of mosaic includes marble from City Hall and tile from the S & W cafeteria. Brick in the kitchen comes from a downtown pharmacy that was being demolished. The iron grate in the living room window comes from Asheville High. Stone from the surrounding fields and chestnut cut from the cove were used throughout the house, which took four years to complete.

It wasn’t just the architectural features that made the house unique, though. Asheville’s artists and intelligentsia were frequent guests, including Thomas Wolfe, who once got into a tussle with Douglas on the roof of the garage over local socialite Tot Weaver. There was a kind of bohemian elegance in the interior design—furniture made by local artisans, dogs curled up on sofas, and crackling fire in the winter. Both Douglas and Kenneth fostered a spirit of learning, creativity, and imagination here. There was a ‘witch’s rock’ in the forest and each year, when the leaves began to turn, a red leaf would appear on each of the children’s pillows, says Middleton Parker. That meant the red fairy had visited. They would run out into the woods to the ‘fairy trees’ and shake them until a shower of small toys and presents rained down. Kenneth was known for his fantastical bedtime stories. The children put on frequent puppet shows, with Wolfe often in attendance (he apparently talked too much during the performances). There were always fresh flowers in the house, a tradition that has still carried through to today.

For Sallie Ellington Middleton (Kenneth’s daughter and Middleton Parker’s mother), the home and its surroundings were inspiration for a notable career as a watercolor artist and illustrator. As a child, she came to know the woods of Chunns Cove intimately and returned later to make The Cove her permanent home. She passed away in 2009. The painstaking detail seen in her work reflects her attention to local flora and fauna. Wildflowers, mushrooms, birds, and the signature Blue Jay feather she included in nearly every work were rendered with knowing expertise. A book about her work, “The Magical Realm of Sallie Middleton” (1980) by renowned Georgia author Celestine Sibley, highlights the influence her childhood surroundings had on her painting.

Douglas’s time in Asheville was short-lived as building ground to a halt during the Depression, and he had to move to Maryland in 1932 to sustain his business. Still, the house has remained a beloved family gathering place through the years. There have been Preservation Society and book club meetings here, school group tours and family events. For the first time last fall, the home was opened to the public for weddings and other events. “It’s a great place to celebrate anything,” says Middleton Parker.

The romance of the house and the grounds is undeniable. To keep wear and tear on the property to a minimum and reduce impact on the neighborhood, the weddings will be scheduled on a “very selective” basis for smaller groups, says Rusignola. In Douglas’s spirit, sustainability will be a core principle—no disposable water bottles for example, no sparklers and no harmful chemicals. The Ellington-designed S & W Cafeteria is now owned by a new generation of the family (also named Douglas and Kenneth) and features a gathering space that some wedding parties may choose to rent for some of the elements of their celebration.

The caretaker’s cottage behind the house has also been converted into a lodging featuring Ellington Middleton’s art and a bathroom window with Ellington’s signature Art Deco feather motif, seen throughout city hall in the lighting and ornamentation on the façade. It’s also in the logo of the Preservation Society of Asheville and Buncombe County.

“While not easily described, the house feels as though it has always belonged in the landscape and gives a sense of timeless charm and character,” says the society’s director Erica LeClaire. Adding to that, her colleague, executive director Jessie Landl echoes what so many others have said: the house is “truly magical.”

In just five years, Douglas Ellington transformed the landscape of the city during its “boomtown” era—Asheville’s population was growing rapidly, and Ellington’s fresh Art Deco designs quickly filled the city’s skyline. The First Baptist Church’s commission is what lured Ellington to the area; his subsequent projects, regardless of scale, demonstrate his attention to detail and the modern elegance of his style. Elllington eventually left Asheville, but not without creating a lasting legacy.

Looking to see his eye-catching designs in person? Here’s where to find them: