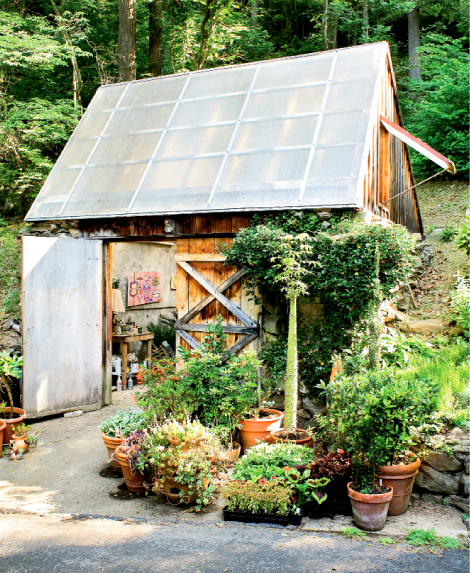 In 1946, Professor Hu of the Beijing Botanical Institute connected the dots between two fascinating discoveries: The first was a species of tree similar to sequoias identified in fossils uncovered in North America, and the second a grove of enormous unidentified trees stumbled upon by a forester exploring the Szechuan province of China. By deducing that the two were one and the same, Hu rocked the botanical world, in a sense bringing back to life an extinct giant. By the end of the decade, Metasequoia specimens, aka dawn redwoods, began to find their way to the States in the hands of excited foresters, botanists, and biologists.

Dr. Elwood Demmon, then director of the Southeastern Division of the United States Forest Service, was one of those giddy scientists. The story goes that more than 60 years ago he toted 200 dawn redwood saplings in tomato cans, along with two and a half pounds of seed, from China to Asheville, en route to the Arnold Arboretum in Boston. At least two of those trees didn’t make the trip north, instead taking root on the grounds of Blue Briar Cottage on Sunset Mountain, the home of Elwood and his wife, Doris.

Today, the pair of dawn redwoods rise 125 feet and boast a girth of three and a half feet. They stand sentry at the entrance of a natural wonderland cultivated by Peter and Jasmin Gentling, who’ve made Blue Briar their home for the last 40 years. While helping to create a peaceful retreat from the city below, the giants, quite frankly, block the view from this breathtaking home, causing some visitors to ask the unthinkable: Why not cut down the trees? “Cut them down?” questions Jasmin. “Those trees are the garden.”

As spectacular as the trees are, some would beg to differ with Jasmin, because the garden they watch over is equally awe-inspiring. For one admirer, Helen Dillon, a renowned gardener and author, the landscape’s unique quality lies in its connection to the forest at its borders. “Peter and Jasmin’s garden has an extraordinary compatibility with the surrounding landscape of a wild wood and all its trees and flowers, animals and birds,” she says.

Common native plants such as sweetshrub mingle with woodland evergreens including rhododendron, camellias, and mahonias. Semi-formal boxwoods are pruned into amusing shapes. Japanese maples abound in a multitude of cultivars, ferns cover the garden floor, espaliered fruit trees are trained along pathway edges, and a striking weeping blue atlas cedar forms a curtain between the vegetable garden and pond.

This 15-acre Eden is the backdrop for Blue Briar Cottage, built in 1906. The Gentlings bought the arts and crafts-style home in 1971, inheriting its intriguing history with the purchase. Secretary of State William Jennings Bryan is said to have rented it while he built a home in Asheville. The house was empty for years, and the police found 1,000 cases of whiskey hidden there during prohibition. Later, it was taken over by the city, fixed up, and rented to President Herbert Hoover’s son, who spent a summer at the house while recovering from a tubercular infection.

Still, it wasn’t the tales of famous inhabitants that captured Peter and Jasmin’s imaginations, but rather the potential for an extraordinary garden. And through their talents, an overgrown hillside has become a revered oasis.

What brings visitors from all over the world to study this lush landscape, or simply stroll its paths? The easy answer is the sheer variety of plant life. But there is also an intangible quality behind Blue Briar’s appeal. “Good gardens are expressions of the owner’s personality,” says Bill Thomas, executive director and head gardener at Chanticleer in Pennsylvania, who has visited the Gentlings’ spot. “One can get advice from others, but the garden will only be good if there is one guiding mind. The owner’s vision and skills, combined with the site, make a garden unique.”

The plot, now included in Smithsonian’s Garden Club of America collection, is the culmination of countless hours of planting and cultivating, which turned a steep terrain into this gallery of gardens—Japanese, perennial, vegetable, and woodland. “When we bought the house, there were some 15 terraces, which I consolidated into seven,” says Peter, a former surgeon. “The front lawn was overgrown with junipers. We pulled all that out, and redesigned the entire garden. Aside from the major trees, I added all the plants.”

Thought is given to the placement of each one to achieve the greatest visual impact, taking into account leaf texture and shape, size and architecture, and variation of color. To add dimension, softer colors are placed up front, and bolder pops draw the eye to the back of the beds.

Although there is no plant inventory, the couple fondly remembers the story of how each specimen arrived. The seeds that gave life to the rugosa rose are from the battlefield at Agincourt, France. The Acer palmatum sprouted from a seed collected at the foot of the great maple in the zen garden at Ryoan-ji in Kyoto. Other plants were gifts from friends whose names read like a Who’s Who of gardeners: Peter Loewer, a prolific author and botanical illustrator who calls Asheville home; Mike Dirr, author of The Manual of Woody Landscape Plants; and J.C. Raulston, namesake of North Carolina State University’s arboretum.

“This garden is a place where relationships have developed over the years and a lot of that is due to Jasmin. She was always willing to be hostess to visitors,” Peter says. “A garden is a wonderful place to form friendships.”

As time has passed, Peter’s focus has shifted from expanding the greenscape to enhancing his scientific knowledge with courses in plant physiology. Today, much of his time is spent in the greenhouse surrounded by cold frames overflowing with propagated plant material. It’s the home of Blue Briar Nursery, a tiny operation specializing in commissions, such as aucuba for Biltmore Estate and golden tiara hostas for Floriade horticultural festival in the Netherlands.

While Peter tends to the nursery, Jasmin nurtures the vegetable patch and flowers. The work has had a profound effect on them. “Being outside in sun, wind, and rain, watching the day and year evolve has given both of us reasons to be alive and engaged,” Peter says. “To take a hot cup of coffee out to the evening bench when the clouds are roiling and the light is settling behind the mountains, to listen to the squirrels chattering and the bear shuffling through the leaves, and smelling the fragrance of the earth is to truly understand what living means.”