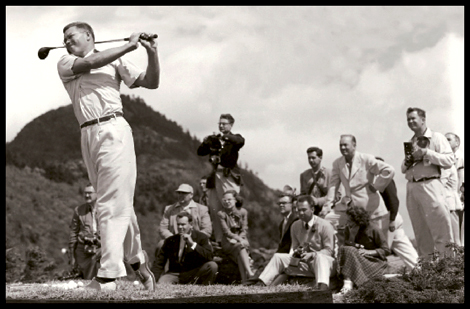 To quote bill murray’s crazy groundskeeper character in Caddyshack, it was indeed a “Cinderella story” when a burly, crew-cut amateur came down out of the North Carolina mountains and nearly won the 1954 Masters. Hailing from Morganton, Billy Joe Patton was a fast-swinging swatter who could pound the ball a mile, but was never certain where it would land. The bespectacled lumber salesman, who was 32 at the time, qualified for his first Masters through his status as an alternate on the U.S. Walker Cup team.

Up to that point, Patton’s amateur record was spotty, though he was known around his home course of Mimosa Hills for his slick play when a few bucks were on the line. However, he admitted his nerves often got the best of him in tournaments. But a change of attitude gave him a fresh outlook. “I scored 75s and 78s in tournaments,” said Patton, “but back home playing dollar golf, I’d knock it around 67 and 68, playing free and easy. I decided I would play at Augusta the way I played here, not letting the game get too serious.”

Patton surprised a sterling field with an opening 70 that tied him for the lead, and followed up with a 74 in the second round that kept him one shot ahead of defending Masters champion Ben Hogan. Despite that performance, the smart money was on the amateur to falter even as he became the darling of the gallery with his booming drives and risky assaults on the pin.

Unfortunately, Patton’s wildness punished him in the third round as he posted a 75 that put him five behind leader Hogan and two behind Sam Snead. At that point, the predictions of his slide down the leader board were proving true.

But Patton was still playing with raw abandon and charming the galleries, telling supporters at one point, “You didn’t pay to see me play it safe.” This amateur, declared the Augusta Chronicle, “would charge hell with a bucket of ice water.”

And he charged on Sunday, cheered on by a bunch of friends who had driven from Morganton to watch the action. Patton couldn’t gain ground on the first five holes, but lightning struck on the par-3, 190-yard sixth. “The china started rattling. The walls trembled,” reported legendary player Bobby Jones. “I had to go out on the porch to see what Billy Joe had done now.”

What Patton had done was fly a five-iron straight into the hole. “The ball hit the hole on the fly and wedged between the flagstick and the edge of the cup,” Patton later recalled. “When I took the flagstick out, carefully, there were three times the number of people there as there were when I hit the shot.”

Patton then birdied eight and nine to make the turn at 32. Behind him, Hogan and Snead were having trouble. When he headed into Amen Corner, Patton led the tournament by a single shot. Bolstered by cries of “Go for it, Billy,” disaster struck at the par-five 13th when Patton yanked out his three-wood and went for it. His rapid-fire shot curled right and splashed into Rae’s Creek, a spot that has sunk many players’ hopes. Refusing to concede, Patton pulled off his shoes and socks, and waded in with the intention of blasting out. However, good sense finally prevailed, and Patton took a drop and finished the hole, still barefoot, posting a double-bogey seven that effectively cost him the Masters—though he later claimed it was a bad shot into the pond at the 15th that truly finished him. Pars on the last three holes left him a single stroke out of a Monday playoff, which Snead won.

But his good humor never waned, and as he trudged away from the 15th, he told a glum gallery, “Hey, this is no funeral. Let’s smile again.”

Patton remained an amateur and played in 12 more Masters, posting two more top-10 finishes and taking the low amateur medal five times. But as he later admitted, he does think often about the
Masters he almost won. n