The Long Road Home: It took a seven-year hunt and a major renovation, but Christine and Rick Mack can finally enjoy their Highlands getaway, far from the bustle of Atlanta 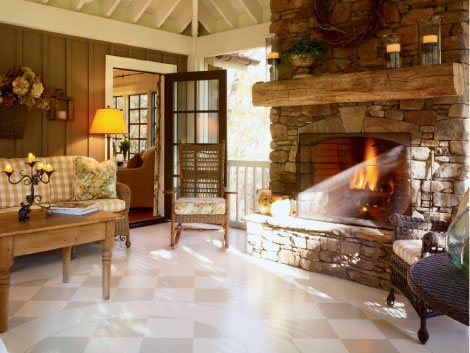 Christine Mack stands at her kitchen counter snipping glossy-leaved boxwood branches and placing them in small glass vases that she’ll use to decorate tabletops and shelves throughout the house. Mid-morning sunlight splashes down through tall multi-paned windows, as her bichon frise, Boo, curls amiably at her feet.

Before Christine and her husband, Rick, bought their Highlands retreat, they made frequent pilgrimages from the Atlanta community of Buckhead to the home of Christine’s best friend, Patricia, on Mirror Lake. “We just fell in love with Highlands,” Christine says. And so began a seven-year quest to find the right home of their own.

Their requirements were simple. Rick wanted acreage and privacy, Christine wanted something special that was close to town (“and shopping,” she exclaims, laughing at the emphasis she puts on her and Patricia’s favorite pastime).

“Patty was very patient,” Christine explains with an affectionate nod toward her friend, who has just popped in. Indeed, Patricia lent her support through the false starts and rough patches during the hunt, including the purchase of a lot off Cullasaja Drive, and a delay after the couple transferred to Washington, D.C., for work. Eventually they moved back to Atlanta, sold the lot, and started the scouting all over again. But one Memorial Day weekend, their luck changed.

The Macks spotted a For Sale sign on Webbmont Road in front of one of the first homes they’d seen—and passed up—during their initial search. “The house was a mess then,” Christine says, shaking her head at the recollection. Water had seeped into the house, rotting the floor joists. At the time, it was a larger project than the Macks wanted to tackle, especially with their demanding jobs in the city (Rick is the general manager of radio station Star 94 and Christine is in corporate real estate).

The interim owners had addressed the damage by replacing the floors and shoring up the structure, but Christine described the house as a rabbit warren, with “low ceilings, dark rooms, and no charm.” They did, however, fall in love with the property and quickly inked a deal. Even their architect, Norman Askins, who had immediately voiced his concern with an incredulous, “you didn’t buy that place did you?” was won over by the gorgeous five-acre expanse. Indeed the land’s gentle slopes and thickets of tall, slim hardwoods and pines create an air of seclusion, despite the closeness of neighbors and the short distance to the center of town.

Askins set to work sketching a plan for a major redesign and renovation. The vistas from the rise where the house sits practically begged for “a lot of glass” to connect the indoors to the environment. The rest, he says, was easy.
The Macks agreed to Askins’ bold initial drawing, which tore away the middle of the existing structure. In its place, a two-story gable became the focal point of the home, while the raised ceiling and multiple windows captured the light and framed the decadent views.

Askins also designed what Christine calls an “eating porch,” a series of screened outdoor sitting rooms that wrap around one side of the house and connect to the master suite and living room. Now, as she moves easily through the dining room, she says the “old” house presented her with a blank canvas, and that she, too, was inspired by their enclave in the woods. The only furnishings she brought with her from Atlanta were a dresser that belonged to her grandmother and several of the painted trays she’s been collecting for more than a decade. So, she and Patricia happily whiled away the hours in local antique stores and home furnishing boutiques, choosing pieces that complemented the woodland theme.

For Christine, this served not only to fill her home with lovely pieces, but was also a way to meet her neighbors and local shopkeepers. “Now I know more people here than I do in Atlanta,” she explains.

The result is a combination of rustic wood, native stone, and thoughtfully chosen art and artifacts which create a balance and harmony. The overall effect is at once organic and casually chic. Askins gives credit to Christine for making the 3,000-square-foot abode “unaffected and honest.” He says, “I love the way the home integrates the land they’re passionate about. It’s laid back and easy.”

Christine echoes the sentiment, adding that the home is a popular spot for informal cocktail parties and holiday dinners.

Though all the surrounding comforts embrace the immediacy of impromptu gatherings, the place itself exudes a sense of timelessness. The tan and white tones are soothing, the open spaces invite quiet lingering, and each window offers a different perspective on ever-changing slants of light, whether in fall or spring, at dusk or dawn.

Christine considers Boo as the pup snuggles against the backrest of the sofa. For her, this home is above all, a place to exhale. “The minute you cross into the mountains you are able to leave Atlanta behind.”