Home /Life at the Top

Life at the Top 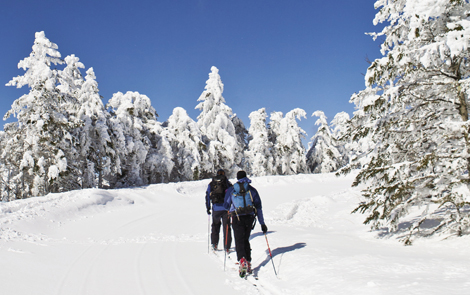 My cross-country skiing buddies and I simultaneously
snapped out of gleeful adventure mode into wary silence.

We’d suddenly realized at once that the alpenglow on distant peaks was sunset. Darkness was quickly descending upon this meadow on Mount Mitchell, but we’d been so enthralled with 10 feet of epic snow and Colorado-like telemark ski conditions that none of us had noticed the light waning until now.

My friends zipped off across the meadow to the cars we’d left near the state park’s closed and snowbound restaurant. I started after them on snowshoes, but then calculated that darkness was only 15 minutes away. There was no way I could keep up with the skiers on the easy route back to the road. To avoid spending the night in the woods in near-zero temperatures, I had one available course—straight up.

Up I went, poling between evergreens that looked as if they’d been covered in whipped cream. I reached the ridge barely before dark. A frozen wall of snow-blasted spruce stood between me and what I estimated was the direction of the restaurant. Back and forth I huffed, trying to find a break in the trees only to repeatedly discover my own tracks. My heart was racing from the climb, but I felt an added twinge of panic as a huge gust of ice crystals blew off the trees. Being an experienced mountaineer means learning from mistakes, and there I was making a new one. I imagined the news headline: “Rangers Search for Missing Journalist.”

Peak Conditions
For people living below the highest peak in the Eastern United States, it’s hard to appreciate the weather atop Mount Mitchell. “We get calls 365 days a year about it,” says Park Superintendent Jack Bradley. “How much snow do you have? How cold is it? What’s the weather going to be like tomorrow?” He chuckles and shakes his head, “That’s definitely one question we can’t answer.”

Here, there is no predicting the weather, especially in winter. At 6,684 feet, Mount Mitchell reigns extreme. The peak boasts North Carolina’s coldest weather recording station—even situated 444 feet below the summit—with an average yearly temperature of 43.8°F. The state’s lowest temperature of -34°F was recorded here in 1985. And from December through February, the average temperature is below freezing.

As low as the mercury drops, the snowfall climbs, with an average of more than 100 inches a year—greater than Buffalo, New York. The state’s greatest 24-hour snowfall occurred on Mount Mitchell in 1993—36 inches. Put a yardstick by your driver’s side door (while imaging a shovel) to appreciate it. North Carolina’s biggest single snowstorm occurred from March 12 to 14 the same year, and dumped 50 inches on the peak.

Forget the yardstick—your car is a bump in the snow.

With this severe climate, it’s no wonder people who slog up Mount Mitchell on snowshoes and skis take comfort in the fact that the peak is continuously populated by park staff. The road to the top is open during long stretches of fair weather, particularly during milder winters, but serious mountaineers often focus on the snowiest, and thus stormiest, times to explore the mountain.

Last February, I got a taste of the staff’s Canadian lifestyle. I managed to finesse an invitation for myself and some cold-weather freaks—I mean friends—to come up and take advantage of awesome winter recreation conditions for three days. There’s something about unlocking the gate at milepost 335 on the Blue Ridge Parkway to start the 16-mile drive up Mount Mitchell that puts butterflies in your stomach. We drove through the gaping mouths of tunnels fringed with icicle teeth threatening to chomp our cars in half. Through swirling snow, we went from dry pavement to a snow-packed trail, the landscape changing from deciduous trees to snow-bombed evergreens that looked like shivering ghostly giants. At the top, we jockeyed for a parking space in gale-force gusts. Only by sheer luck did I avoid having my car door ripped off by the wind. Later, a park maintenance staffer told me that door dislocations happen a lot.

Ranger Matthew Brown greeted us at the maintenance area, a cluster of garages, staff cabins, and communal barracks that looked like an Antarctic research station. “You must have good karma with mountains,” he said, shaking my hand. “This is the first time we’ve seen the sun in three weeks.” By then, winter had dumped 120-plus inches on the peak—50 inches in the previous three weeks.

The superintendent and two rangers bunk in three rime ice-encrusted cabins at 6,200 feet. The buildings hum all winter in the constant wind. Other employees commute from their homes in the valley, which is why keeping the road open is job number one. From N.C. 80, between Marion and Burnsville, the trip is 11 miles of parkway and five miles of N.C. 128 to the summit. When the road is clear and weather permits, Bradley does his best to facilitate park visitors.

We took in our surroundings and then carted our gear across the parking area to the six-room barracks. The structure is a residence for a few rangers and summer seasonals, and it’s “can’t-get-home” quarters when commuting employees don’t dare leave. Downstairs, there’s a large living room and kitchen. We’d lucked out. That night, on-site staffers were celebrating Mardi Gras with a mega-meal, and we were invited.

The work of Winter
Resident rangers usually work 10 days on and four days off. The headquarter’s receptionist and the park’s go-to maintenance guys, Larry Blevins and Wade Barnett, work Monday through Friday. “You can’t just sit around the stove in the shop,” Barnett says. “Last winter we had nine feet of snow on the ground and 18 days in a row of subzero temperatures. In those conditions, you really wear out the equipment. Things break, freeze up, fall off. We had to change the snowplow’s cutting blades every seven days.”

Blevins adds, “If it breaks, we’re out there fixing it. There are times when you’re lucky to get 10 minutes outside before you have to go back in.”

Employees plow during daylight hours seven days a week as needed using a huge front-end loader and plow-equipped dump and pickup trucks. The diesel fuel requires a certain mixture of kerosene to keep it from jelling in the cold. “If we delayed plowing long enough to let a wet snow turn to ice, we’d have to cross plow back and forth with the loader one scoop at a time to break it up,” explains Bradley.
That was the monumental task after the 50-inch blizzard of 1993. It took five days to excavate the roads with a front-end loader. The first day of that storm, Bradley began plowing at 5:30 a.m., but had to stop after barely making it back to the maintenance area for gas. “I couldn’t see the gate when I came crawling back up the road,” he says. “At 11 a.m., it was as dark as it is at 11 o’clock at night. Then came thundersnow and intense lightning. It must have been snowing four inches an hour.”

That was the worst snowstorm of the 25 winters Bradley has spent on the mountain. “I’ve never seen anything else like that,” he says. “Drifts 12 to 16 feet deep would suddenly appear and be gone an hour later.”

Back-up systems need attention, too. Generators power the maintenance area and headquarters during outages, which have lasted weeks at a time. “This would be a pretty dreary station if we didn’t have generators,” Bradley says. “One thing is certain, you’re always ready for spring.”

The duties also include removing downed trees. Snow often mixes with freezing rain, which means that parking areas, trails, and even the road can become blocked. Also, the rangers stand ready to react if hikers are reported lost or overdue, but those occasions are relatively rare because the adventurers who brave Mount Mitchell in the winter tend to be experienced and well-equipped.

Summit Tour
The morning after our Mardi Gras celebration, we set off on a cross-country ski tour to the summit. As we climbed, we watched the front-end loader pile snow into massive mounds. We skied and snowshoed up the new, icicle draped summit ramp. I looked down at Elisha Mitchell’s grave. I have nothing against Mitchell—anyone who risked and lost his life on a virgin-forested mountain striving to accurately measure a peak in the mid-1800s deserves credit. But somehow, it seems more appropriate to bestow a name like Mount Washington, the highest in New Hampshire, honoring a man for measuring the potential of a people.

As we gathered on the summit, clouds leapt over the windswept ridge like sheep in an insomniac’s count. Hoar frost stood out in feathers from every surface. The plaques at the peak and Brown oriented us to the surrounding white world before we had big fun skiing down the wide ramp from the summit. Near the parking lot, we plunged between snow-choked spruce trees and floated down into waist-deep powder—the only reason it was even possible to ski this steep, wooded section of the Old Mitchell Trail.

Beyond getting an education in what it takes to be a ranger in these extremes, we were privy to the largest perk. There’s “beauty very few people off this mountain ever see,” Bradley says. “A lot of people just wouldn’t imagine this exists in the South.”

“Sometimes on my way up, I just stop and look out at the awesome world we have up here,” Blevins says. “We’re privileged to have this beauty all around us.”

A Night to Remember
Later, as I stood lost and momentarily frozen in the bitter cold and near darkness I recalled Blevins’ comment—this was beautiful, powerful, even intimidating. By now, my skiing friends were long gone.

With no time to waste, I quickly aimed my adrenaline at a solution. No longer sure which direction to go, I spun my fanny pack around front, squeezed the tiny flashlight on my parka zipper and peered at the compass dangling on my pack. I knew the Black Mountain range trends northeast. I shortened my trekking poles to ice axe length, stepped up to the white wall of evergreens, dropped to my knees, and ducked under the lowest bows in a cascade of snow.

After careening through the dark for 20 minutes, checking my compass often, and occasionally falling into tree trunk pits, I broke through. My feeble beam revealed the stone wall of the restaurant.

Heading back to a warm barracks in my car, I reconsidered the name Mount Mitchell. After pondering an unexpected night exposed to the East’s highest elements, I concluded that it was understandable to name the peak after a man who took a walk in these woods and never came back.

Randy Johnson is an avid skier and author of Southern Snow: The Winter Guide to Dixie. www.randyjohnsonbooks.com