Home /Leader of the (Six) Pack

Leader of the (Six) Pack 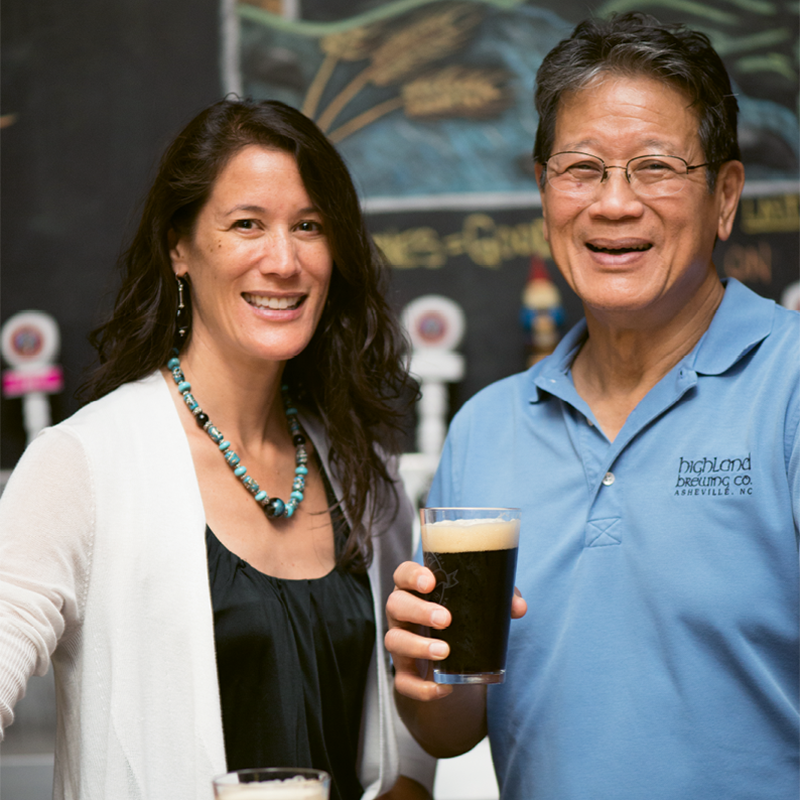 “A wee bit different”—Highland Brewing Company’s original slogan remains apt in some ways, even as the flagship Asheville brewery expands, evolves, and sheds its Scotsman logo in a new rebranding campaign. How different? Consider the company’s origins, for starters: Unlike most craft breweries, Highland was founded by an engineer (not a brew aficionado) in a basement (not an industrial-chic warehouse) as a distributor (not a tasting room). Opening in 1994, it became Asheville’s first post-Prohibition brewery.

But perhaps what makes Highland most unique today is the woman running it: Leah Wong Ashburn. “It wasn’t new for Highland to have a president that’s not a brewer, but it’s unusual to be a second-generation, female, non-brewer” in this role, Ashburn says of the position she assumed in 2015. Even her look—impeccable posture, lustrous black locks, and broad smile—is a far cry from the stereotypical flannel-clad male mien associated with most of her peers. But for Highland, the brand of “different” Ashburn brings is just right.

Ashburn’s tenure with the company was initially a case of sliding doors. When her father, Oscar Wong, began the business, Ashburn was in her early 20s and eager to join his team—but he rebuffed her. Instead, she pursued a gratifying corporate career in Charlotte, working as a representative of yearbook companies to teach the tenets of journalism to students and teachers.

When Wong finally offered Ashburn a job, years after he’d denied her request (and at 25 percent of her then-salary), naturally, she declined. “I think it might be easy for people to think that coming to a family-owned brewery would be a no-brainer, but it took me eight years after dad offered me a job. And it was really because your priorities change,” she says. “Being financially independent was my goal in my 20s into my 30s, but the reward of it became less important. My job started challenging my patience more than my intellect.”

The final impetus for her career shift was the potential for impact. “Being a brewery, it’s about the beer, but it’s also about the community role of Highland,” she says. “It’s about contributing to Asheville and making it a better place. The ways that Highland goes beyond beer—that’s what locked it in.”

In 2011, Ashburn left behind the corporate ladder for the family biz, working first as a sales rep then in marketing before becoming Highland’s vice president and then president. Since taking on her father’s former role, Ashburn has dedicated herself to maintaining the uniqueness of the brewery, even as she molds it to reflect her own values.

Among those values is sustainability, an ethos that’s echoed in Highland’s very structure. The brewery’s solar array is the third largest among US craft brewers and the 13th largest of any brewery in the world. In its event center, there’s live-edge oak furniture harvested from the Highland grounds and, hidden from view, a water reclamation system installed by Ashburn’s husband, Brock Ashburn, who serves as Highland’s vice president of operations.

Ashburn’s commitment to environmental stewardship is an expression of her love of the land, which is apparent through other facets of the brewery, like the rooftop patio, where imbibers can take in Highland’s brews with a view. Weekly run and bike clubs encourage fans to get outside, and the annual Night Flight Race, held each summer, raises funds for local greenway efforts.

Ashburn, who enjoys an active lifestyle, plans to expand such offerings in the future, and she has the resources to do so. “We are so fortunate that [my father] had the foresight to have this 40-acre property on a hilltop surrounded by other hilltops,” she says emphatically, gesturing to the ranging hills just outside and sharing her dreams to expand the property’s trail system. “If I can offer that here, then this brewery becomes more of a reflection of me and my team, who also love to get outside.”

The list of Ashburn’s innovations keeps growing: The interior of the tasting room recently received a revamp, for example. Meanwhile, the composition of Highland’s staff is shifting as Ashburn cultivates a hiring process that intentionally seeks out character over expertise. And even the beer is evolving, as the brewers begin to experiment with bretts (beers with wild yeast) and barrel-aged brews.

The biggest change, however, is to the brewery’s brand. Revealed in February, the new face of Highland Brewing Company is a product of extensive research and forethought. After a series of surveys conducted across three distinct populations—people unfamiliar with Highland, regular customers, and employees—it became apparent that it was time for a change.

Those unfamiliar with the brand assumed that Highland’s Scotsman mascot represented Scottish beer, which was inaccurate—it was more of a nod to the region’s Scots-Irish settlers. And when Ashburn asked her team to offer three words that describe Highland, the breach between product and brand became increasingly apparent. “They said great things like authenticity, pioneering, leadership, sustainability, and community—but not a single person said ‘Scottish,’” she recalls. “So having that be our lead visual was creating a disconnect, from the people that don’t know us to the people that know us best.”

As for Highland’s devoted fans, 75 percent voted for a change in packaging. “That’s a huge number,” Ashburn notes. “And 49 percent of them specifically said our packaging is dated. It was overwhelming.”

Ashburn recruited Austin, Texas-based Helms Workshop (a creative agency with plenty of experience in the beer sphere) to create new visuals that embody Highland’s spirit. The result is new branding with one foot solidly in the tradition of the brewery, with the other stepping firmly into 2018.

“We’ve had the same brand since ’94 and it has served us very well. The core remains: We were inspired by the Scots-Irish heritage in the area, so the name stays the same,” Ashburn says. The new logo—a simplified, stylized compass and “H”—epitomize Highland’s pioneering leadership and authenticity.

The company’s slogan is changing as well: Highland will now tout itself as “Pioneers in Craft” and “Asheville’s Original Craft Brewery.” And in truth, the expiration of the old catchphrase seems fitting: Under Ashburn’s nimble leadership, Highland is a lot more than a “wee” bit different.