Home /Kings of the Hill

Kings of the Hill

Kings of the Hill: For 50 years, tourist season at Chimney Rock Park opened with a rumble 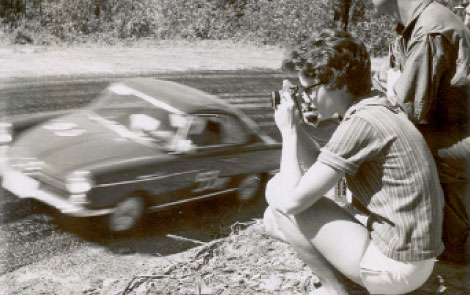 For all his years competing in the Chimney Rock Hillclimb race, Jan Davis gladly says that he never went over the edge. Some of the other drivers weren’t so lucky. “One year, Whit Fairer was driving a Honda CRX, and he lost it around one of the turns and went off the road,” Davis recalls. “He later told me that he had suddenly felt the steering wheel go loose in his hands, like the front tires weren’t touching the ground anymore.” With nothing else to do but let the laws of physics run their course, Fairer quickly reached across his chest to grab the seat belt shoulder straps, tucked his head, and braced for the landing. At that turn in the road, there were two tall trees “that must’ve been exactly one CRX-wide apart from each other, and his car went straight through that opening.” It came to rest in a thicket below. The car was hauled out, and Fairer walked away unharmed.

It’s a scene that repeated itself many times during the hill climb’s 50-year run. Men and women, sometimes more than 100 of them, showed up to test their cars and driving skills on the 18-foot-wide old access road that winds its way up to the parking lot just below the park’s namesake Chimney Rock. The spectacle, which rivaled the famous Pike’s Peak hill climb in Colorado, drew large crowds that set up camp with lawn chairs and picnic blankets for the three-day weekend at the end of April—and sometimes in the fall, too.

These types of races, where each driver runs the track solo against the clock, weren’t new to the area when Chimney Rock started hosting its own event in the mid-1950s. In fact, one of the first hill climbs in North America was held near Black Mountain in the early 1900s.

The Chimney Rock Hillclimb was organized through the combined efforts of the Morse family, who owned the park until 2007, and the Sports Car Club of America, the nation’s main sanctioning organization for amateur racing. For the Morses, the event was a loud kickoff to the area’s tourist season, but for local entrants it offered a chance to race against some of the best drivers east of the Mississippi. “Every year, a big group from Ohio would come. There was another group from Georgia, and another from Florida,” says Davis. The camaraderie was as tight as the competition. Racers were divided into classes according to their cars—set apart by engine size and the extent to which they were modified from factory condition. The driver with the fastest time overall won the title of King of the Hill.

Competitors spent the entire year racing other events, constantly tuning and tweaking their cars to produce as much speed and traction as their budgets allowed. For Davis, who now serves as the Vice Mayor of Asheville, the fact that he owned a tire shop meant he had access to good wheels, tires, and suspension components for his touring-class Volkswagen Rabbits. The engine was tuned for power and every last piece of unnecessary material was removed from the car to reduce weight—things like door panels, window glass, rear seats, and carpeting—and a roll cage was added for safety.

“You wanted as much horsepower and as little weight as possible when building your car,” says John Finger of Greenville, South Carolina. He won his individual classes many times over and was named King of the Hill 12 times between the late ’60s and the ’80s—often in cars he built himself.

Finger would start out with a used, bare racing chassis that he’d buy for a few hundred dollars. From there, he would scavenge parts to build the engine—he preferred high-revving Mazda motors—and then set up the body, aerodynamics, and everything else to suit his needs. He even took a job at the local Austin-Healey dealership to get a better price on parts for his early races.

“I built my race cars for pennies on the dollar, compared with some of the other guys,” he says. “And it was pretty easy to sell a race car after it won the hill climb.” Every year, he’d aim to produce a little more power, subtract a little more weight, add some more downforce with a bigger wing, and hopefully shave another couple seconds off his time. Though he raced other tracks throughout the season, he often built cars specifically with dominating the hill climb in mind.

“I remember one year, the Audi team showed up with one of their rally cars and a famous driver,” says Finger. The manufacturer had obvious intentions of scoring an easy win against a field of amateurs. Finger fondly recalls them packing it up at the end of the weekend without the title. “That car wasn’t right for the hill.”

A Race to Remember

But being crowned King wasn’t the only memory to be made. For spectators, it was a chance to get up close to the action. Before the race, they could interact with (if not get drafted into helping) the pit crews that were often made up of the drivers’ friends. When the cars were running, fans could choose from no shortage of places to watch the runs—whether it was setting up lawn chairs by the starting line or laying a blanket on the grassy patches near the road. The more adventurous ones would climb through the forest to the top of the hill and watch racers cross the finish line. Once the last driver summited the hill, they might even catch a ride back down in the passenger seat of a race car.

It went on like this for three days. Friday and Saturday, each class held their qualifying runs. Depending on how many competitors showed up, only the fastest cars from each class were allowed to drive the course on the final day. On Sunday, the finalists would make as many runs as possible to lock down their fastest time.

Davis recalls a period when completing the 1.8-mile course in less than two minutes was considered impossible. It became the hill climb’s equivalent of track runners’ fabled four-minute mile. Once the two-minute barrier was broken, finishing times at Chimney Rock kept getting quicker and quicker. Spectators got to witness the fastest class of cars averaging more than 60 miles per hour on the narrow road. That means that every second spent taking a turn at 20 miles per hour had to be countered by another second on the straights in excess of 100.

Although no one (driver or spectator) was ever killed during the race, liability became a concern for the family-owned park. Couple legal worries with the park’s standing as an environmental showpiece of the Blue Ridge Mountains, and the future of the Chimney Rock Hillclimb grew dim. The park decided it was best to end the race in 1995, its 50th anniversary.

For the drivers, it was an emotional affair, and the SCCA officials let all the racers who showed up that weekend make a final run up the mountain, regardless of the times they posted earlier. According to Davis, each one finished and parked their car at the top, got out and shared stories about past years’ races. When it was time to head back down, the cars—lined up in parade formation—revved their engines one last time as they rolled past a cheering crowd.

“Every once in while,” says Davis, “I still drive that course in my imagination.”