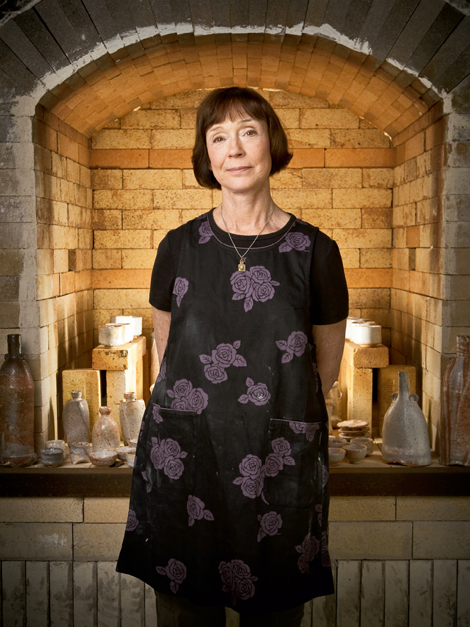 Wrapped in deep earthen colors and subtle undulating grooves, Judith Duff’s pottery begs to be picked up and held. From orange tea bowls to platters stamped with seashells, her pieces are tactile, yet ethereal and organic, combining her background in clay with a passion for Japanese aesthetics. “Always growing through change,” the Brevard potter writes in her artist statement, “I value the unique and unusual.”

Originally from Macon, Georgia, Duff studied biology and painting at Wesleyan College. Ceramics had been part of her coursework. In 1985, she and her husband moved to Brevard where Duff pursued art, but she found herself returning to ceramics. “I would paint, but my mind was always in the clay room,” she says. “Clay just gets in your blood.”

At first, she fired her work in a gas kiln, and the results proved consistent. But Duff wanted her pieces to be unpredictable, so she sought out different types of atmospheric firing, such as salt, soda, and wood, that would give her work more character. She built her first wood kiln in 1998, and the next year visited Japan to study wood-firing techniques at the International Workshop of Ceramic Art in Tokoname. That trip sealed her love for Japanese approaches to pottery.

“Their pots are much more organic, looser,” she explains of the style. “The Japanese accept and honor what we [Westerners] might consider imperfections that happen with wood-fired pottery. If pots crack, they’ll often highlight the cracks with gold.”

Duff has since traveled to Japan to work at some of the country’s revered ancient kiln sites, where potters developed historically significant styles and techniques. In 2004, she began her ongoing research of shino, a type of glaze often used on ceremonial tea pieces. These glazes use ground feldspar minerals that are similar to Western North Carolina feldspars, and give pots a frothy surface. “It’s an absolutely beautiful glaze,” she says. And it’s one she’s come close to duplicating using local materials.

As her explorations in clay continue, so do her wood firings. Six times a year, she stacks as many as 600 pots and fires two large wood kilns. The only consistency is that the results are unforeseen. “That’s what I really love,” she says. “You never can repeat anything in a wood kiln. Each piece has its own history, and the more you look at it, the more you see.”