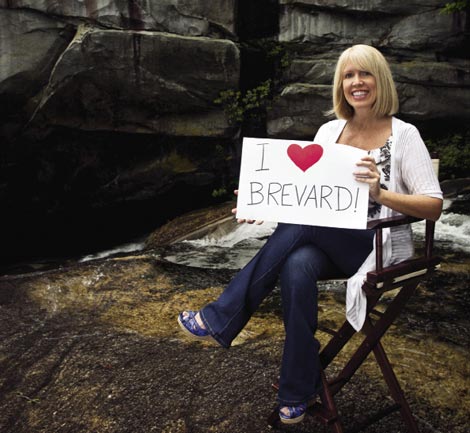 Ann Sharpsteen can’t go anywhere without being recognized as the “I Love Brevard Girl.”

It’s true; Sharpsteen treasures her adopted hometown so much that she’s made it her business to share that affection with the world. She writes the popular blog, titled I Love Brevard, and in June, filming began for the reality television pilot she created featuring 30 of the town’s colorful characters.

Sharpsteen grew up in Rio de Janeiro and other far-flung locales. Nashville is where she found her calling as a television writer and producer, creating shows for networks including CMT, MTV, and CBS, and producing music videos for the likes of Garth Brooks, Alan Jackson, and the Dixie Chicks. She’d visited family in Brevard many times and loved the area. “So when a window of opportunity opened, I decided to follow my heart,” she says.

After moving to WNC with her son in August 2010, her blog developed, and the website about town happenings exploded. Now, she says, the site averages as many as 30,000 page views a month and she receives e-mails from people all over the world. In the future, she hopes to offer profiles of locals, such as the man who runs the strawberry stand. “I see these people every day, but don’t know them,” she says. “I’d like to ask, ‘what’s something people would be surprised to learn about you?’ ”

Sharpsteen’s reality television show will be loosely scripted and follow the lives of six or seven core characters. “None of them have any acting background,” she notes. “But they’re all really open to sharing their lives.” The pilot, which she  expects to be reminiscent of Northern Exposure and plans to pitch to her television connections, will include episodes about a misdemeanor skinny-dipping incident, encounters with the resident serial dater, and a woman who rescues moss.

“Brevard has a rhythm that no other town in America has,” Sharpsteen says. “It’s just funny and quirky and inherently Brevard.”